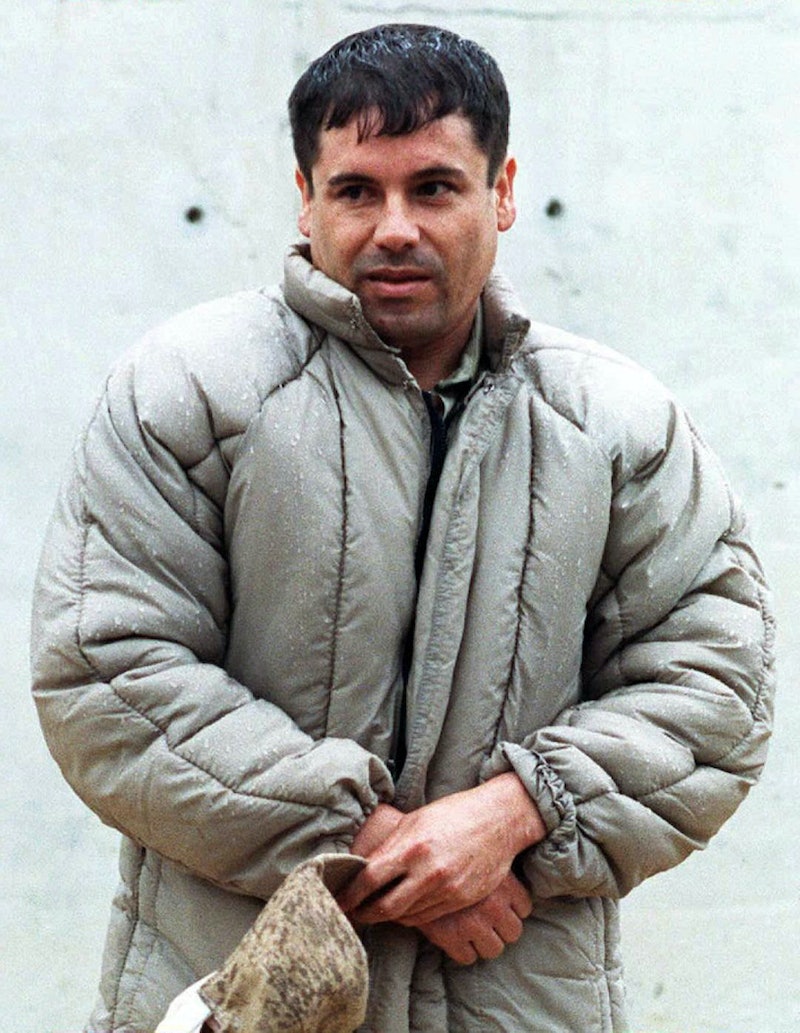 For the second time in his infamous drug kingpin career, Joaquin "El Chapo" Guzman has escaped from prison, breaking out of his maximum security facility in Mexico on Saturday night. According to Mexico's National Commissioner for Security (CNS), Monte Alejandro Rubido Garcia, at a press conference Sunday morning, Mexican authorities have unleashed a manhunt to capture the drug lord and believe Guzman managed to escape through a hole in the shower area of his cell that directly led to a ventilated mile-long tunnel underneath the prison complex.

Rubido said that the last time Guzman was seen was at 8 p.m. Saturday night while receiving his daily medication. When the guards found that Guzman disappeared, they discovered a ladder that led 32 feet down to a lighted tunnel with embedded rails for motorcycles that allegedly led the drug kingpin out of the prison complex and to the end of a construction site. A motorcycle was found in the tunnel.

At the time of discovery of Guzman's prison break, Mexican Authorities have put Altiplano Federal Maximum Security Prison on lockdown to prevent anyone from coming in or leaving. In addition, military and police officers were deployed to lead the manhunt. CNS head Rubido also stated that all flights out of Toluca's airport, just 30 minutes outside of Altiplano, were grounded preventing Guzman to flee by air.

The National Security Commission is suspecting that there might have been inside help that led to Guzman's prison break and are currently questioning 18 guards at Altiplano. In 2001, the deadly drug lord of the Sinaloa Cartel reportedly managed to escape by hiding in a laundry basket through the help of prison guards after bribing them. He was recaptured 13 years later in 2014.

Earlier this year, Mexican President Enrique Pena Nieto's administration expressed concern at the idea of Guzman escaping. Although there have been escaped prisoners prior to Guzman at the Altiplano prison complex, preventative measures were made by Mexican authorities after years of concerns of potential prison breaks. In response, Mexican authorities surrounded the complex with 1 meter-thick walls and airspace near the facility has been restricted. The authorities have also limited cell phone transmissions to over six miles to prevent communications between inmates and any outside help. In addition to the extensive preventative security measures, there are heavily armed guard officials stationed to protect the prison complex in case of a potential assault.

Guzman was first arrested in Guatemala in June 1993 and was sentenced to 20 years in prison for drug trafficking, criminal association, and bribery. Two years later, he was transferred to a maximum security prison after being convicted of three more crimes: drug trafficking, possession of firearms, and the murder of Cardinal Juan Jesus Posadas Ocampo. He is estimated to be worth $1 billion.