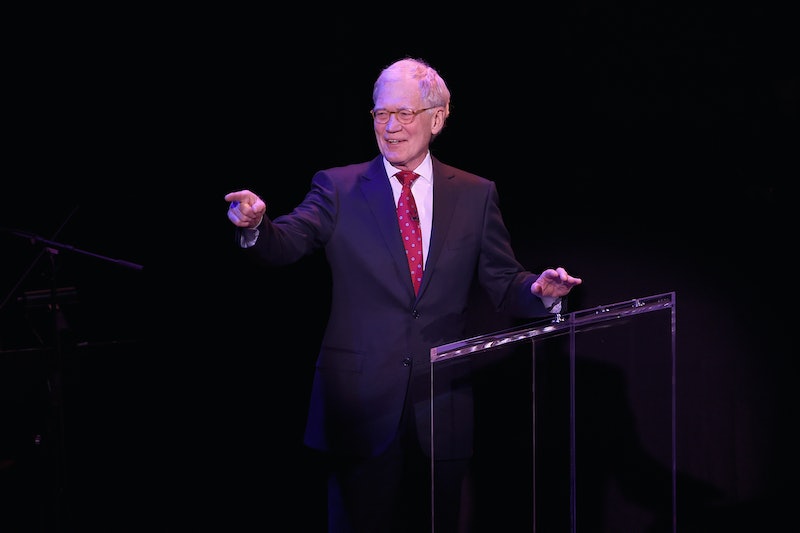 David Letterman left his longtime late night talk show throne back in May, but he just had to come out of retirement this weekend to comment on Donald Trump's presidential bid. On Friday, July 10, the former Late Show host appeared on stage at Martin Short and Steve Martin's A Very Stupid Conversation comedy tour stop in San Antonio, Texas. Letterman skewered Trump in a Top 10 list filled with so many great jokes that I've rounded up the best jokes from it. Of course, the comedian couldn't help but take lots of shots at the businessman-turned-politician's trademark hair piece.

Letterman started off the appearance saying that his retirement had been going great — he's spending a lot of time at home ("I am so happy to be out of the house," he told the audience), making friends, relaxing and growing a beard. But then came news of Trump entering the 2016 Presidential Election race, which caused Letterman to call retiring "the biggest mistake of my life, ladies and gentleman." And then, in familiar fashion, he reached into his suit pocked and pulled out one of his good ol' Top 10 lists, ready to roast Trump and the waves he's been making recently when it comes to Mexico, illegal immigration and crime.

And here are the best jabs Letterman used in response to Trump's presidential run.

The comedian did a perfect impression of Letterman's longtime band leader. "So this is a Top 10 List?" he said, with Letterman responding, "Yes, Paul." Short followed this up with another joke, "Right now, Paul is doing what he was always meant to do: He's a maitre d' in a spaceship."

The real No. 10 in the list makes me want to re-watch the classic comedy ASAP and see if this is an insult to Trump or an insult to gophers.

Ooh, BURN! I mean, he does seem like the type to be really into himself.

5. "No. 8: Donald Trump Looks Like The Guy On The Lifeboat With The Women & Children"

Because he's only out to save himself, get it?

6. "No. 7: He Wants To Build A Wall? How About Building A Wall Around That Thing On His Head?"

Finally, Letterman lightly touches on Trump's controversial immigration remarks and he does so with flair and class.

7. "No. 6: Trump Walked About From A Moderately Successful Television Show For Some Delusional...Oh No, Wait, That's Me."

Oh, Dave. If only you knew how much we missed you.

Letterman first commented that he "saw the line outside and I hoped this was a Spurs game," talking about the comedy show's crowd, then he moved onto skewering two NBA teams who aren't doing too well at the moment. There's always next season, right?

There was a tie for the No. 3 spot on Letterman's list and this is the clear winner.

And like always, Letterman saved the best dig for last.

Check out the hilarious video below.

More like this
Everything To Know About 'The Undeclared War' Season 2
By Rachel Mantock
'The Undeclared War' Took Inspiration From This Gavin & Stacey Location
By Maxine Harrison
Why Sadie Sink Is Hopeful Max Will Return In Stranger Things Season 5
By Brad Witter
What Working At Marvel Is Really Like, According To A 'Ms. Marvel' Co-Creator
By Gretchen Smail
Get Even More From Bustle — Sign Up For The Newsletter