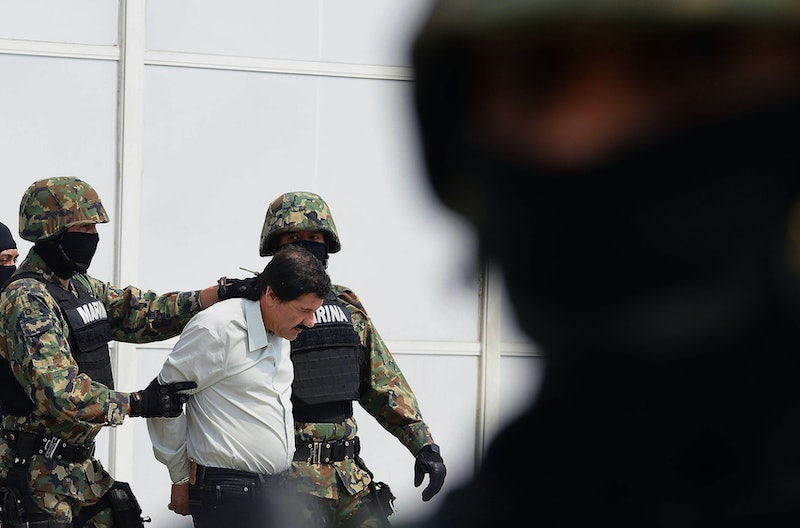 A manhunt is underway for the infamous and deadly drug kingpin Joaquin "El Chapo" Guzman. Guzman, head the dangerous Sinaloa Cartel, escaped from the Altiplano Federal Prison — a maximum security prison just outside of Mexico City — on Saturday night, Mexican officials said. Guzman escaped through a 32-foot hole in his prison cell that dropped down to a mile-long ventilated and illuminated tunnel underneath the prison complex and led to the end of a construction site. There's no question as to whether Guzman received outside help from his cartel members. But what is the Sinaloa Cartel, and is the group really as dangerous as authorities claim?

The Sinaloa Cartel is the oldest, richest, and most powerful international drug gang in Mexico. Named after the state Sinaloa, the gang is primarily based in Culiacán, the state’s capital, and operates in nearby states of Sonora, Baja California, Chihuahua, and Durango. The article is also labeled the “Golden Triangle” for its control over the Sonora, Chihuahua, and Durango states, a region that is a major producer of cannabis and opium. According to the U.S. intelligence community, the Sinaloa Cartel is known to be "the most powerful drug trafficking organization in the world." Here's what you need to know.

The Sinaloa Cartel Is A Deadly Empire

The Sinaloa Cartel expands outside of Mexico into North America and even reaches across the sea to Europe, Australia, West Africa, and the Philippines. Through their drug trafficking and criminal efforts, the cartel helped Guzman garner a a fortune worth of $1 billion and get listed on Forbes' The World's Most Powerful People list, along with numerous world business and political leaders. According to the Associated Press, the cartel also holds powerful control and continues to expand their territory in Mexico — even when Guzman was behind bars. But more importantly, it's about how the Sinaloa Cartel managed to gain that control of territory and drug routes.

The Sinaloa Cartel has made some notable partnerships and alliances with other powerful drug cartels in Mexico. According to InSight Crime, who research organized crime in Latin American and the Caribbean, the Sinaloa Cartel are currently aligned with the Gulf Cartel and the Familia Michoacana, and are engaged with the Tijuana Cartel. Over the past 10 years, the cartels has been involved in an ongoing deadly war for territory in Mexico, unleashing chaos in the country that have resulted in the killings of more than 100,000 people. Their method of violence? Beheadings and bodies dissolving in vats of acid.

The Sinaloa Cartel Has Been Secretly Working With The Mexican Government

According to an intensive investigative report by NPR, the Sinaloa Cartel’s power and influence rely heavily on its partnership with Mexican officials. The Sinaloa Cartel allegedly bribed the Mexican government to help "El Chapo" Guzman avoid capture, expand the cartel’s territory, and keep their cartel members out of prison. According to a former police commander in Juarez, the entire police department was working for the Sinaloa Cartel and helped fight off other rival drug cartels like the Juarez Cartel in Juarez Valley.

In his U.S. trial, Manuel Fierro Mendez, a former police leader in Juarez, said he worked for the Sinaloa Cartel. Fierro Mendez also told U.S. authorities the Sinaloa Cartel would often seek recruits among officials in his position — police captain — in order to receive support and leniency among other officials in different cities. The cartel has been successful in gaining the support and cooperation of these police departments either due to lust for money or fear of death. As for those who weren’t on the cartel’s payroll? They still had to obey the rules otherwise they would face execution by the cartel members.

The U.S. Government Has Also Worked With The Sinaloa Cartel

The U.S. government was also caught partnering with the dangerous Sinaloa Cartel. In an investigation by Mexican newspaper El Universal, the U.S. government worked with the cartel for 12 years between 2000 and 2012, aiding them to smuggle drugs worth billions into the United States in exchange for leaked information on rival cartels. In the intensive report produced by El Universal, there are written statements and court documents of DEA (Drug Enforcement Agency) and Justice Department officials testifying they cooperated with the Sinaloas. According to the report, DEA officials met with top Sinaloa leaders more than 50 times, offered to have charges in the United States against cartel members dropped, and may have accepted bribes. Furthermore, the FBI and DEA both have recruited members of the Sinaloa Cartel to become informants within and for rival gangs for the possibility of potential drug raids, seizures, and arrests.

According to Bloomberg, the Sinaloa cartel supplies nearly 80 percent of drugs — heroin, cocaine, marijuana, and methamphetamine — to the Chicago area. The street value of all those drugs have an estimated value of $3 billion.

There's no doubt that the Sinaloa Cartel still holds massive control and influence over not only Mexico's drug routes, but the political and economic climate of the country as well. With Guzman on the loose, there's been a lot of speculation about whether there was inside help from prison guards and the Mexican government. And with President Enrique Nieto furious at Guzman's escape, who knows what the future of Mexico would look like? If the drug war in Mexico heightens once again, there's once thing for certain: more bloodshed and corruption are expected to return.