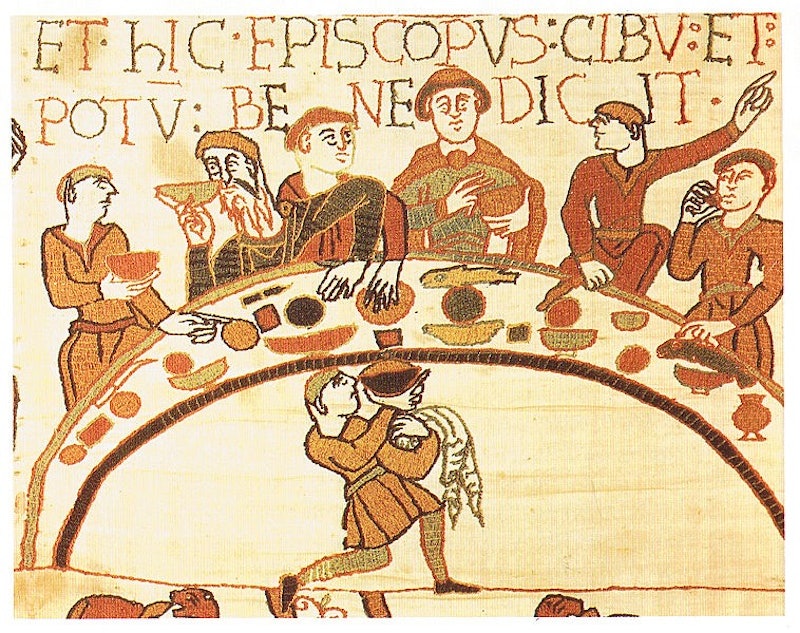 Humans have a lot of talents — war, cooking, bizarre sexual positions — but one that's stuck around through all human societies is the art of the insult. They've been present in every human civilization that's left records, including some hilarious Roman graffiti. The cutting wit of some of history's greatest intellectuals has lasted in their famous insults — Groucho Marx, Oscar Wilde and Winston Churchill come to mind. But medieval insults are a particular brand of the florid, furious, and crazy, and they're frankly so offensive they should probably stay out of fashion, where they belong.

You can tell a lot about a society and its values by its insults. It's pretty clear-cut: if you're told your ancestors were pigs, family lineage is very important (as in modern China), and if somebody calls you a cabbage-eater, clearly there's something very morally wrong with cabbage as a foodstuff. Medieval Europe's insults lay out views along those lines: Reputation was everything, and insults were a serious concern — you could take somebody to court for slander — but they differed radically for men and women. Men were valued by their social status, women by their chastity and behavior. If you wanted to insult them, that's what you targeted.

The insults we use these days are pretty limited: they're crude, often sexual, and don't have the same poetic ring as they did in the good old days. But these medieval ones, as charming as they may seem, probably wouldn't work so well in the modern era.

Sample Sentence: "I can't believe you'd go out with such a base football-player; his parents don't even own a yacht."

Meaning: Low-born. Football, back when this insult was spouted in Shakespeare's King Lear, was a game for the lower classes, and was renowned for being lawless and violent. (Yes, more than nowadays; games regularly rampaged through town centers, involved hundreds of people, and caused several deaths.)

Sample sentence: "You pretend you went to private school, but you're just a crooked-nosed knave."

Meaning: Classless and ridiculous. This actually comes from a defamation suit in England in 1555, where a man named John Bridges claimed that a dude called Warneford had called him this in public. It was clearly a serious insult.

Sample Sentence: "Fetch my slippers if you're going to act like a churl."

Meaning: Peasant-like, coarse. This comes from the Old English word ceorl, which literally meant a man one level above a slave. (It also, weirdly, evolved into the Russian word for king, korol.)

Sample Sentence: "Five selfies in thirty seconds? You're such a cox-comb, Kanye West would be jealous."

Meaning: A vain, foppish person. The cockscomb on the top of a cock's head is used for mating displays and generally strutting around looking self-important. Not a huge stretch.

Sample Sentence: "I ain't saying she a doxy, but she seems to spend an awful lot of time with that dude with the prison tatts."

Meaning: A promiscuous woman. This was actually less an insult than a technical term in the medieval period; a doxy was the wife or sexual partner of a brigand or outlaw who robbed people on the roads.

Sample Sentence: "You stole my chips? All of them? You glos pautonnier!"

Meaning: Gluttonous scoundrel. The words are Old French, and were thrown about with great abandon in epic stories from the medieval period. It's a smoother way of calling somebody a pizza-stealer.

Sample Sentence: "If you keep posting topless shots to Instagram people are going to start calling you a puterelle."

Meaning: A woman of ill repute. This comes from Old French too ("putain" remains a modern French swearword today). You'll notice that the most elaborate thing you can do to insult a woman in the medieval period is condemn her virtue; it was her most important attribute.

Sample Sentence: "No, you skamelar, you cannot borrow $500, now get out of my house."

Meaning: Scrounger, parasite. If you ever want to spend your afternoon with some delightful archaic insults, pick up the poem this comes from, "The Flyting Of Dunbar And Kennedy," which is in Old Scots. Not only is it in rhyme, most of the insults are alliterative!

Sample Sentence: "Nine inches? Please, I heard from Angela you were a mandrake mymmerkin."

Meaning: Little man, puppet, childlike. A mandrake, as you'll remember if you've read your Harry Potter, is a plant meant to resemble a tiny person, while a mannikin (from which we get our word "mannequin") was also a small man or child. This comes from Dunbar & Kennedy's shout-off, too.

Sample Sentence: "Stop honking at women; dude, what are you, hedge-born?"

Meaning: Low-born, illegitimate. It's not too difficult to parse this — if you were born in a hedge, there's a high chance your mother didn't have a nice rich marital bed to give birth in. Hey, at least it's better than a ditch, right?

Sample Sentence: "That politician is such a levereter he'd skin his own kids for some dough."

Meaning: Literally "liver-eater," corrupt, or depriving the world of necessary nourishment. This fabulous insult dates from 1400s Ghent, and is a splendid depiction of corrupt businesspeople lining their pockets at the expense of everybody else.

Sample Sentence: "My ex is such a ronyon she scares babies and small dogs."

Meaning: A mangy woman, old and scabby. French in origin again, this one comes from rogneux, to be covered in scabs. Shakespeare was very fond of this one in the Elizabethan period, and it pops up in Lady Macbeth and the Merry Wives Of Windsor.