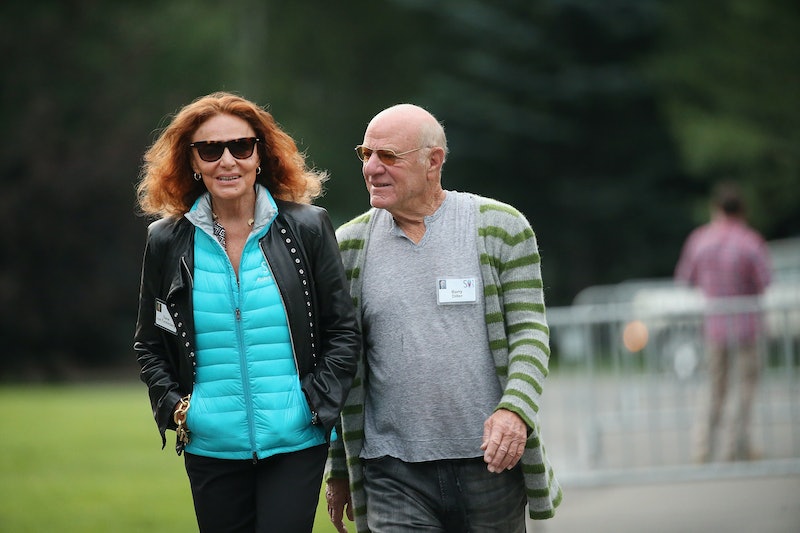 I never thought I'd get sex and love lessons from a fashion powerhouse like DVF, at least not directly. I figured what the ready-to-wear icon (who clocks in at No. 75 on Forbes' 2015 list of Power Women) could teach me would come through the language of fashion: how a cinch here or a pleat there could up a woman's sex appeal, or at least make her look her very best. I thought the clothes would do the work. After all: I'm a big believer in the complicated and unspoken language of fashion.

All that was before I read Diane Von Furstenberg: A Life Unwrapped by Gioia Diliberto. In her biography, Diliberto, the author of sex books, all about lady dynamos, reveals the woman behind the clothes. And for those of us who have only known von Furstenberg as a way-gorgeous older woman, what a woman she is.

Turns out, DVF is an undisputed minx. Designer Catherine Malandrino, who worked for DVF in the late '90s, said of the designer: "Diane was so sensual, the way she sat on the sofa and moved her legs and arms ... I thought, Diane is the wrap dress." Throughout her life, Diane has been married twice (and is currently married), but she has "slept with many men," something that the designer "[doesn't] regret." This is the woman who came of age during the '60s and '70s, the woman whose "power of style [was derived] from the heat of sex flowing through it." In other words, she knows a thing or two about a thing or two.

Here are 7 lessons about sex and love, courtesy of DVF, that will help you embrace love without losing yourself.

1. Be Ready For Anyone, Anywhere, Especially When You're Young

During her first year at Stroud Court, an English boarding school, Diane lost her virginity at fifteen. "She also had an affair with a lesbian friend named Deanna. 'She was very shy and masculine, and she intrigued me,' says Diane. 'I was in love with her.'"

2. Find Your Prince (or Princess)

Literally: when she was in her 20s, Diane married slim, gold-tressed, playboy Prince Egon Von Furstenberg. And even though Diane didn't come from a royal family, she knew she was the catch in the relationship. According to Diliberto, "despite Egon's money and title, his pedigree and connections, Diane was the real force in the relationship. She knew it when she fell in love with him; it was why she fell in love with him." And even though they later divorced, Diane remained close to Egon for the rest of her life.

3. When Possible, Stay Friends With Your Exes

Yes, really. Diane has remained close to almost all her past-BFs. According to Diliberto, "loyalty is one of the qualities Diane prizes most in herself and others." Designer Oscar de la Renta said of DVF, "She's unbelievably loyal to her friends, and also to the things she believes in." For Diane, maintaining friendships with her exes means remaining true to herself.

4. Don't Be Afraid To Change A Little

When she was in her mid-30s, after a brief love affair with stud-of-the-moment Richard Gere, Diane took a holiday to Bali. There, she met a South American artist named Paulo, "a tall, handsome man with a brown beard, a green stone in one earlobe, and a sarong tied around his waist." Though the relationship would ultimately fizzle, Diane let herself be inspired — and changed — by her new lover's culture. "He released in her a flood of ideas," writes Diliberto. "She called her new cosmetics line Sunset Goddess and based it on the romantic hues of the sunset over Bali's Kuta Beach ... inspired by her explosive meeting with Paulo ... she decided to call the new fragrance Volcan d'Amour."

5. Let Yourself Get Carried Away By Love: You Never Know What Will Happen

In the mid-'80s, Diane dated the French writer Alain Elkann. The affair temporarily transformed her life. She sold her New York real estate and moved to Paris. Though Elkann was controlling ("her beloved leopard carpets and bright colors, which Elkann loathed, were banished" from their Left Bank apartment), Diane's time in person allowed her to cultivate her interests outside of fashion: she hosted writers and artists, poets and musicians at the couple's home. Though the relationship didn't serve Diane, that didn't prevent her from seizing the "new opportunities" that accompanied it.

6. Keep Your Own Space Sacred

Investing in yourself means pampering yourself and giving yourself what you need. Diane and her husband, media mogul Barry Diller, keep separate apartments. "In New York, Diane stays in the loftlike apartment high above the DVF boutique in the Meatpacking District that is also the site of her company's headquarters.""

7. Don't Be Afraid To Take Matters Into Your Own Hands

"'What I think I'm really selling is confidence,' DVF often says."" That means acting with conviction — outside the boardroom. Diane told Oprah Winfrey in 2014 that she proposed to [longtime beau, Barry] Diller. 'I called him and said, 'You know, if you want, for your birthday, I'll marry you.'"