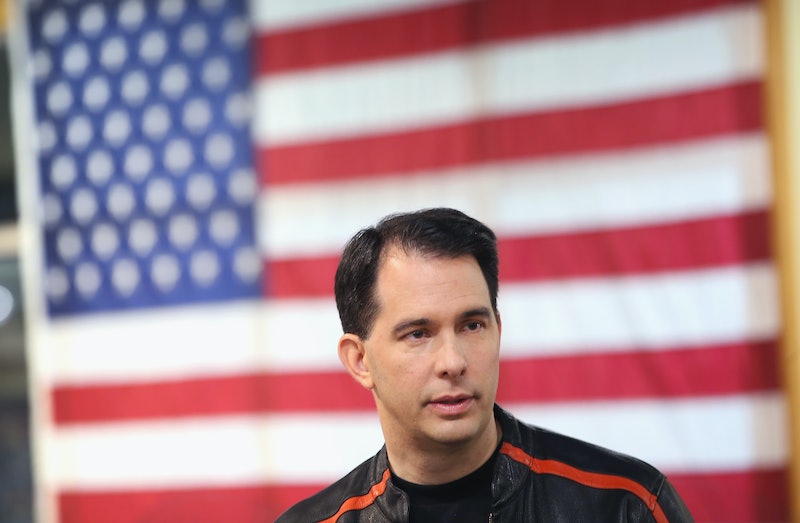 There's a lot of strong language you could use to describe Scott Walker, but the president of The American Federation of Labor and Congress of Industrial Organizations (AFL-CIO) summed up the Republican governor and Presidential contender better than anyone else. In a statement on Walker's Presidential campaign announcement, Richard Trumka simply said, "Scott Walker is a national disgrace," and those six words say it all. While others are going on and on about everything they dislike about Walker, Trumka's statement about Walker was perfect, because sometimes less is more.

Walker's track record in Wisconsin doesn't exactly make him an ally to unions, and the president of the largest U.S. union alliance was not shy about sharing his opinion of Walker. Since becoming governor in 2011, Walker has stripped unions' rights in his state, eroding public-sector bargaining rules and signing a right-to-work bill that prohibits requirements for private-sector employees to pay union fees. Walker also opposes a minimum wage, saying in 2014, "I'm not going to repeal it, but I don't think it serves a purpose." Walker's proud of his successful fight against unions and thinks his history battling union protesters proves that he could handle foreign policy as President. In February, the governor said: "If I can take on 100,000 protesters, I can do the same across the world."

Trumka doesn't see it that way. The AFL-CIO has consistently opposed Walker's anti-union legislation in Wisconsin, so it's no surprise that the organization's leader isn't a fan of Walker. Rather than explaining all of this, Trumka just called Walker "a national disgrace" and got his point across as quickly as possible. The short yet powerful attack is so brilliant because it implies that Walker isn't even worth Trumka's time. Sure, he could have written a lengthy statement outlining all the ways Walker is bad for workers, but that would mean spending valuable time and energy on Walker. Trumka's statement (er, sentence) also says a lot more than that Walker doesn't support unions — calling him "a national disgrace" says that Walker disappoints on every issue.

Trumka spoke for everyone who finds Walker's political ideals and agendas outrageous and offensive (which is a pretty long list). Walker isn't a multi-faceted candidate who needs a lot of explaining — he's just a disgrace. America obviously doesn't need a national disgrace as our President, considering they serve as the face of the nation.