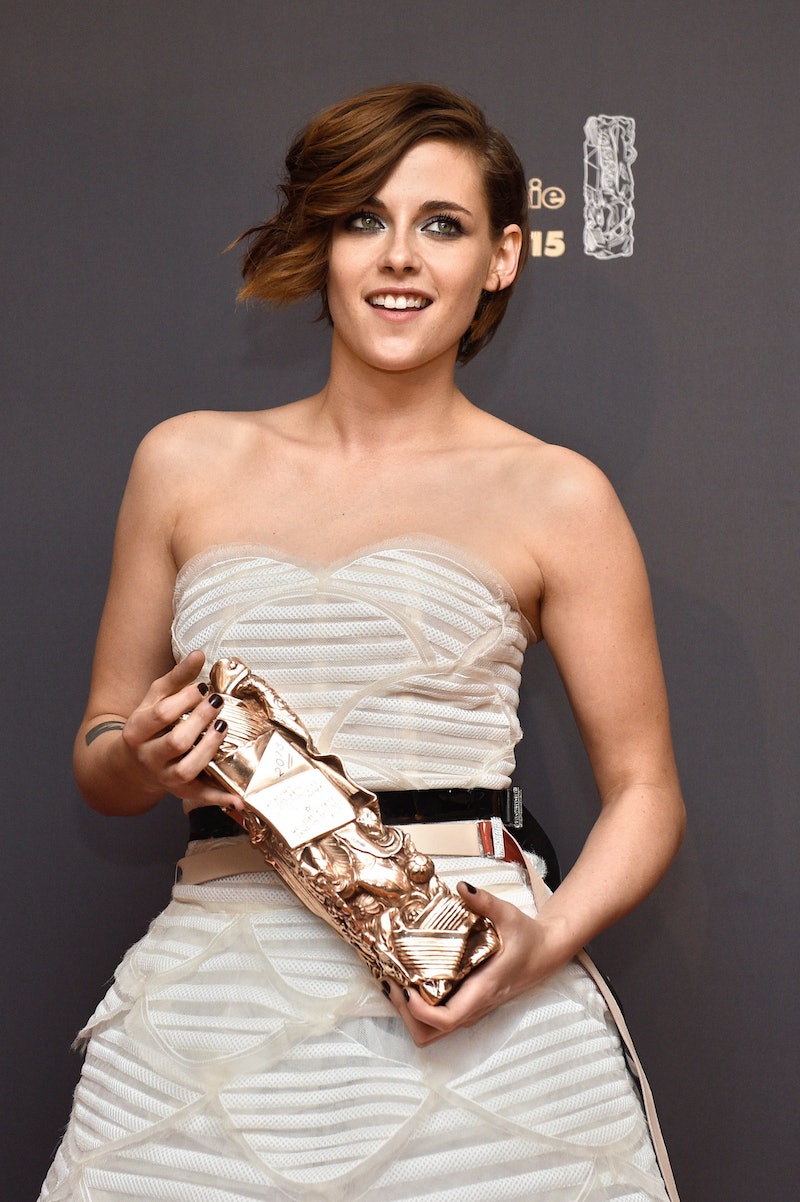 Whether you're living in Hollywood, or just living a normal, everyday life like the rest of us, aging is pretty much always seen as a bad thing. I, for one, don't actually mind it one bit, and try to embrace every birthday. For me, life gets better with age. And you know what? The same apparently goes for K. Stew. As the August 2015 Marie Claire cover star, Kristen Stewart shared her thoughts about getting older, opening up about how aging, at least for her, has been one "awesome" experience so far.

After being asked whether or not she'd finally made "peace with her public image," the Twilight actress admitted, "I'm really proud that I am able to move forward and not fall into every mental crater. That's a new thing for me." And according to K. Stew, that's all thanks to getting older. "Age has made me smarter and calmer," she added. "And it is f--king awesome." Get it, Kristen.

Now, in case you're currently thinking, Stewart can't be that old, so of course she's not bothered by her age, you're only half-right there. She may only be the tender age of 25, but by A-list actress standards, some people, especially those in the entertainment biz, might see that as being part of (what I like to call) the dreaded "Hollywood years." (Aka when your age starts to hinder your work and can actually affect what roles you earn.) On many occasions, actresses have dealt with ageism. For example, take that time Maggie Gyllenhaal was told she was "too old" — at 37 — to play the lover of a much older man. So goes the unfortunate sexism of the entertainment world, my friends.

And that double standard is something K. Stew is definitely no stranger to. In fact, Stewart has boldly called out Hollywood's blatant sexism before, so the fact that she's defying the norm and publicly embracing her age probably isn't a total surprise. The Still Alice actress reminds us of all the good that comes with each new birthday. Getting older means gaining more confidence, as well as becoming wiser and more open-minded. It also makes it a whole lot easier to take life by the horns and go after what you want. Basically, Stewart's reminding us of something that bears repeating: we should be living life looking forwards, rather than looking back.

Just like Stewart, you can't go back and fix your mistakes, but you can start living a healthier and successful life now and in the future. So, let's take some time to love ourselves no matter our age and reflect on just how much more awesome we're about to become.