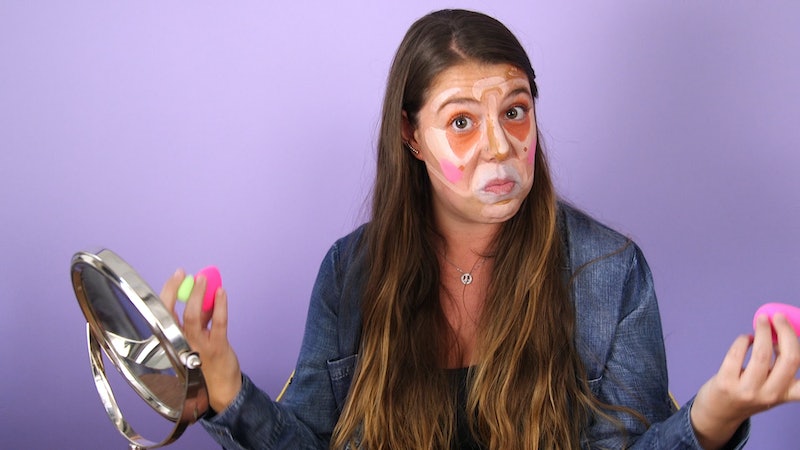 Makeup artist Esther Isabel Amado Romo, aka BellaDeLune, broke the Internet two weeks ago with her clown contouring makeup tutorial. In the beginning, you might have thought it was a joke, made to take the piss out of the likes of Kim Kardashian and her contouring crew. But by the end, you're jumping in your seat and reaching for the beauty blender. Amado Romo's video makes the painstaking process of contouring look a little less boring — and who wouldn't love painting a poop emoji on their forehead every day?

The video now boasts almost a million and a half views, inspiring the editors at Bustle to to test out whether or not the clown contouring can actually work. After all, Amado Romo's face looked pretty spectacular by the end of the whole extravaganza.

Marie Southard Ospina, Rosanne Salvatore, and Sierra Taylor Horton bravely put their faces forward to have the contouring (and the poop) painted on their cheeks, and were happily left to blend away. After taking selfies, of course. Although as a makeup artist, Amado Romo is used to blending, brushing, and applying cosmetics, the editors joked their way through, tentatively using a beauty blender for the first time. At first, it kinda seems like the makeup would never merge into anything resembling of a real human, but eventually the pounds of liquid goop melt together to form three fabulous faces once again.

The results were impressive (considering how much everyone seriously looked like clowns at the start), leaving no actual sign of clown makeup anywhere! In fact, all three women looked like easily identifiable Homo sapiens by the end of the process. Horton says the lesson taught her a bit about bronzer and blusher, but who can be bothered to do the "full on clown thing" every day?

The verdict? Not entirely worth the hassle, but we shouldn't judge. The process actually starts to make sense as you start moving the colors into one another, and it's easy enough to understand why somebody would want to make this a part of their makeup routine. And so, clown contouring is a small way (or an extensive way, depending on what end of the foundation application spectrum you fall on) to make what can sometimes feels like a chore just a little bit more fun.

More like this
The "Cloud Skin" Trend Is An Updated Way To Wear Matte Makeup
By Jordan Murray
How To Get “Glazed Donut Nails” At Home
By Audrey Noble
Emily Ratajkowski Believes You Should, In Fact, Get Bangs
By Rachel Lapidos
The 8 Best Beauty Looks At The 2022 People’s Choice Awards
By Audrey Noble
Get Even More From Bustle — Sign Up For The Newsletter