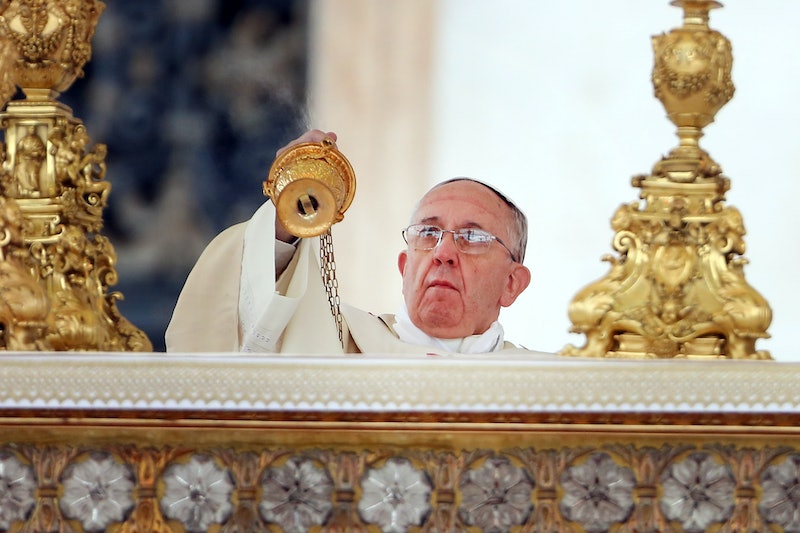 Everyone’s favorite Catholic tweeter Pope Francis revealed the mission statement for his papacy Tuesday, and it’s got everyone talking. (And by that we mean it's also got everyone asking “Wait, papacies have mission statements?”) The pope said that he hopes overcome the “globalization of indifference” and to leave the church more merciful and missionary: a church that helps the poor or oppressed. Remember how everyone assumed the Catholic Church was over all of that helping-the-poor-and-sick stuff, and instead focused on making sure pregnant women stay pregnant and partnered gay people remain legally unconnected to one another? Yeah. This guy is a welcome change.

The 84-page document in which Pope Francis revealed his vision is called “Evangelii Gaudium” — “The Joy of the Gospel.” “It is the fruit of personal reflection,” said Vatican spokesman Rev. Federico Lombardi. “There is coherence between the words of the documents and the actions of the pope.”

The document strikes a balance between calling on the church to think of “bold and creative” ways to reach out to the faithful and making it clear that some accepted parts of church doctrine are not up for negotiation. Though the pope nixed the prospect of ordaining women, he said there are “still broader opportunities for a more incisive female presence in the Church,” as well as “in the various other settings where important decisions are made.”

"I prefer a church which is bruised, hurting, and dirty because it has been out on the streets, rather than a church which is unhealthy from being confined and from clinging to its own security," Pope Francis wrote. "I do not want a church concerned with being at the center and then ends up by being caught up in a web of obsessions and procedures.

So, yeah — while the previous pope(s) were embroiled in scandals, this one schooled Vladimir Putin on Syria, repeatedly reached out to the disabled and disfigured, and decided to poll Catholics on controversial issues that have distracted the church. A man of god, indeed! Now if he’ll only ordain a lady, these Catholics will be thrilled: