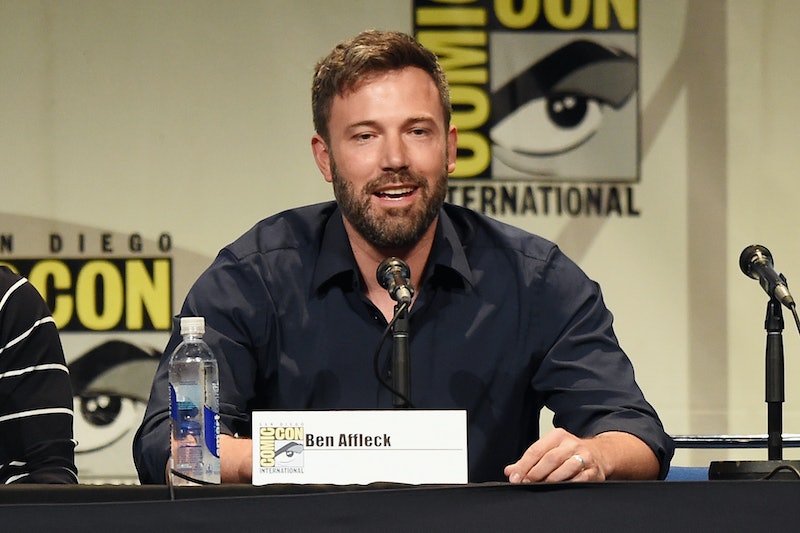 It's only been two weeks since he went public with his split, but now Ben Affleck's lower back tattoo is getting as much attention as his divorce with Jennifer Garner. The actor was photographed while on a Starbucks run last week and the paparazzi spotted the previously unseen body art. He has not confirmed nor denied if his lower back tattoo is real or fake.

Affleck's latest tattoo features a colorful design that uses red and bluish green ink. It's not clear what the full tattoo looks like, although it's large enough for most of it to be covered up by his jacket. The lower portion of the actor's tattoo was only visible after he bent slightly and reached for items in his car. While it's still a mystery what Affleck's tattoo represents or if it's significance has anything to do with the divorce, it's definitely not his first. The 42-year-old has a barbed wire, and skull and bones tattooed on his bicep, as well as a cross on his shoulder. His most surprising piece of body art, however, is a dolphin tattoo on his right hip that covers up the name of his high school girlfriend.

The location of Affleck's new tattoo is commonly known by it's hugely offensive and inappropriate nickname "tramp stamp." In fact, women with lower back tattoos are sick of hearing about it and what others might assume. Affleck is by no means making a statement (that we know of) with his latest tattoo, although based on some stars who have this type of body art, there's a possibility that he might regret this decision someday. Check out a photo of Ben Affleck's lower back tattoo:

Below are five other celebrities who have lower back tattoos and they might inspire you to get one yourself or "learn" from their own lessons in choosing where to get inked.

The reality TV star has the word "Daddy" tattooed on her lower back in honor of her late father Robert, but says that she regrets ever getting it on a "trendy" part of the body.

Richie also regrets getting a Gothic cross tattoo on her lower back as well as the red bow on the back of her neck.

Among the handful of ink on her body, the singer and The Voice coach has a Hebrew psalm tattoo on her back.

Ricci's lower back tattoo is a colorful bouquet of Sweet Peas.

Becks is known for his meaningful tattoos, including his son Brooklyn's name on his lower back.

More like this
The $6 Drugstore Beauty Product Taraji P. Henson Uses Every Single Day
By Danielle Sinay
Sarah Jessica Parker Will Change Your Outlook On Aging
By Rachel Lapidos
Regé-Jean Page On The Art Of Power Napping
By Paris Giles
12 July 4th Beauty Sales To Jump On ASAP
By Jordan Murray
Get Even More From Bustle — Sign Up For The Newsletter