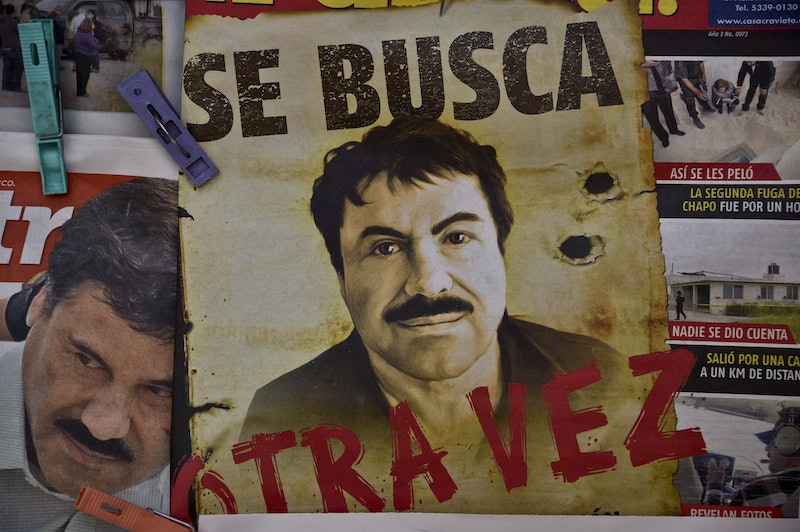 The infamous Mexican drug lord may be on the run, but in between digging holes and fooling police, "El Chapo" is tweeting at Donald Trump and laying down the law. "El Chapo," formally known as Joaquin Guzman Loera, is the leader of one of the world's most notorious drug cartels and is currently on his second prison escape after digging an elaborate tunnel underneath the prison bathroom. It appears that Guzman stays up to date on international news, however, because shortly after his escape his Twitter account, which is reportedly run by his son, started furiously tweeting at the presidential hopeful.

Guzman, like many, was probably offended by Trump's recent streak of racist comments toward Mexicans and immigrants in general. "When Mexico sends their people, they’re not send their best ... They’re bringing drugs, they’re bringing crime, they’re rapists," Trump said when announcing his candidacy for president. But he didn't stop there.

Despite reportedly being asked by RNC Chairman Reince Priebus to "tone it down" on the racist remarks, as Hillary Clinton suggested, Trump is still going strong. Instead of apologizing or backpedaling, Trump is sticking to his beliefs on immigration. During a campaign rally in Phoenix, Politico reported that Trump further fanned the fires.

It appears that Guzman doesn't appreciate Trump's portrayal of the Mexican people as criminals and drug lords, so he decided to make his sentiments known on Twitter. Roughly translated, the tweet reads, "Keep fucking around and I will make you eat your fucking words, you fucking white cagaleche." A cagaleche is a homophobic slur. Don't look it up on Urban Dictionary.

Although the Daily Mail reported that Trump called in the FBI, he's putting on a brave face in light of the threat and is tweeting up a storm of his own.

Admittedly, it's unclear (and unlikely) that Guzman is the one actually running the Twitter account in question. Though some have assumed it's a parody account, the prevailing theory is that the account is run by one or both of his sons. But the account has been active for years, so we can rule out a prankster taking advantage of the news cycle. Whoever is in charge of the account, however, isn't just gunning for Trump. They also called out Mexican president Enrique Peña Nieto, who is probably not feeling too great about this whole situation.

To add insult to injury, Peña Nieto and his administration objected to the U.S.'s repeated attempts to extradite Guzman to the United States. Instead, he was held in Altiplano, a maximum-security prison. "This is a huge embarrassment for the Mexican government," security analyst Ana Maria Salazar told CNN. "Obviously it's going to raise a lot of questions as to what's happening with the Mexican criminal justice system."

"And you @EPN," the tweet read. "Don't ever call me a criminal, because I give work to people, unlike your fucking current government." In addition to political slams, the account is also full of strangely inspirational messages, like one tweet that read, "In this life, nothing ventured is nothing earned," along with, "Never say never, the world takes many turns."

The Twitter ramblings only add to the increasingly bizarre account of Guzman's escape, which feels like it was pulled out of a bad action movie. The threat is likely false, and Trump is probably in no danger from Guzman or his cartel. But it might be smart for Trump to cut back on the racist Mexico comments — at least while Guzman's on the run.