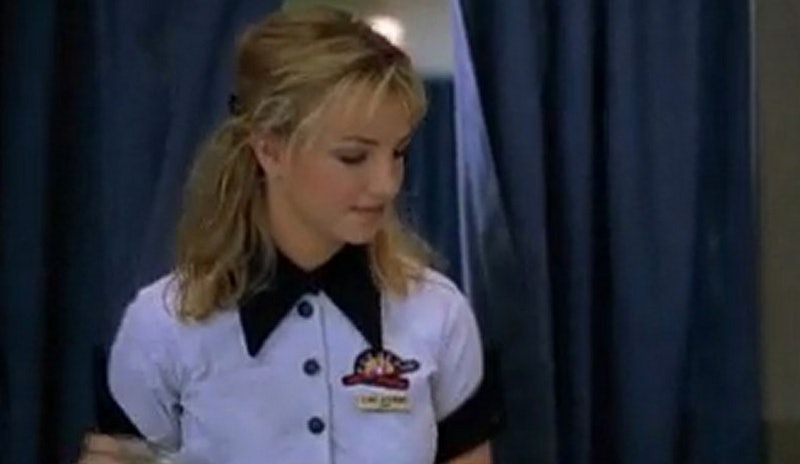 Up until a few days ago, I had zero idea that a straight-to-DVD feature film/cameo bonanza co-written by late ‘90s/early ‘00s Orlando pop music impresario Louis J. Pearlman existed. Well, "exist" is an understatement; Longshot , which was released in 2001 and somehow managed to fly under my radar for 14 years, doesn't just exist. It glows. I really can't believe I've gone this long without crossing paths with Longshot, aka my new favorite movie.

Longshot opens with the members of boy band O-Town watching an infomercial. In the infomercial, two members of Bizarro O-Town peddle a VHS for a movie called Longshot. (If you guessed a movie-within-a-movie is about to go down, you guessed right.) The infomercial doesn’t really tell the viewer what the movie is about; it just lets the viewer know that Longshot is a not-to-be-missed flick. Moments after the weird commercial, there’s a knock at the front door. A delivery person drops off a copy of Longshot. It's freaky as all get-out. But rather than scream and slam the door and hide, the “Liquid Dreams” singers decide to pop Longshot in the ol' VCR. So brave, so noble. And then, the movie-within-the-movie begins.

Here's a quick summary of the movie-within-the-movie: Alex (Joey Sculthorpe) is a high school kid who misses a game-winning shot at a high school basketball game. He lives with his older brother Jack (Tony DeCamillis, who co-wrote this film alongside Pearlman), a personal trainer/gigolo to the wealthy housewives of Beverly Hills. Around the 15-minute mark, Jack finds himself in trouble with the husband of one of the housewives. After his nuts are threatened with a baseball pitching machine, Jack goes to New York to find out information about a mysterious woman/square CD technology on behalf of the housewife's angry husband. Alex tries to find love in Los Angeles and in NYC. Hilarity ensues.

Oh, and there are cameos. So. Many. Cameos. Whether one of the two protagonists is at a CD store/coffee shop, shooting an airball, thumbing through a manila folder on an airplane, or eating an 18” P.P. with B.O., famous faces crop up at every turn. It truly is an exhilarating viewing experience.

Not thirty seconds after my editor and I found ourselves gasping at Longshot's impressive Wikipedia page the other afternoon, I knew what I had to do: I gladly spent the next 90 minutes of my day watching the cinematic masterpiece. I would say "I watched it so you don't have to," but that would be disingenuous. I believe in my heart of hearts that everyone on this spinning orb we call Earth must watch this work of art. If you aren't picking up what I'm throwing down, I hope the screencaps below will convince you to put the movie in your eyes as soon as humanly possible. Here are 59 of the 70,000 reasons to watch Longshot:

O-Town is hooked by Longshot from the jump

Danielle Fishel's there, too

Does that haircut belong who I think it belongs to?

Hot diggity, it's Justin Randall Timberlake as the surly valet driver! What a reveal!

J.T.'s face is more or less frozen like this for the entire scene

J.T. cringes at the car stereo as 'N Sync song "I Feel The Love" blares from the speakers and the meta-ness of it all is almost too much to handle

In the middle of a personal trainer/gigolo montage, Jack shows off his collection of wire-rim sunglasses

During that same montage, Jack reluctantly chokes down a glass of egg yolks

Gilbert Gottfried is Alex's boss at a CD store/coffee shop

Ellen Albertini Dow is one of the store's most loyal customers

Topanga and Alex barely know each other, but that doesn't stop Topanga from squeezing Alex's stomach at his place of work

An explosion happens out of nowhere

A helicopter shows up out of nowhere

Jack is forcefully shoved into the helicopter out of nowhere

And then, things REALLY escalate when Jack's client's husband's henchmen decide to shove Jack out of the copter out of nowhere

Jack falls out of the copter, but SPOILER ALERT! Jack survives

Jack's client's husband threatens his groin with a pitching machine

Harry Wayne Casey of K.C. and the Sunshine Band also flies a plane

Dustin "Screech" Diamond is a waiter

Someone asks pizza chef Joey Fatone for “an 18-inch P.P. with B.O.”

These butterfly clips, though

Chris returns because apparently, bothering complete strangers in the middle of their meal is less of a hassle than politely asking a server for some napkins

All hilarious bits come in threes, so for his third and final act, Chris covers his face and attempts to ask for parmesan cheese while speaking in an unidentifiable accent

With the intent of lightening his load, Jack hands a stranger one of the smaller bags and it's totally cool because he never really wanted that pair of diamond-encrusted sunglasses anyhow. He cherishes his wire-rim collection.

Alex wears this timeless bucket hat to a karaoke contest

I repeat: THE ROCK IS IN THIS MOVIE

Alex somehow tackles The Rock, shattering everything I thought to be true

Gilbert G. talks to a rodent because sure, why not?

He shoots the ball

His new ladyfriend makes this face

He scores and wins a gazillion dollars. THE END.

O-Town and Jermaine Jackson are big fans of Longshot, and so am I

Ready to start your Longshot adventure? I knew you would be! Here's part one. You're welcome in advance:

More like this
Britney Spears Shares & Deletes Photos Of Justin Timberlake From 22 Years Ago
By Jake Viswanath
20 Years Ago, J.Lo Was Supposed To Kiss Madonna With Britney At The VMAs
By Jake Viswanath
Zach Gilford Admits He Forgot Taylor Swift's Name When He Starred In Her Music Video
By Jake Viswanath
Victoria Beckham’s Spice Girls Audition Was V. Theatrical
By Sam Ramsden
Get Even More From Bustle — Sign Up For The Newsletter
From hair trends to relationship advice, our daily newsletter has everything you need to sound like a person who’s on TikTok, even if you aren’t.