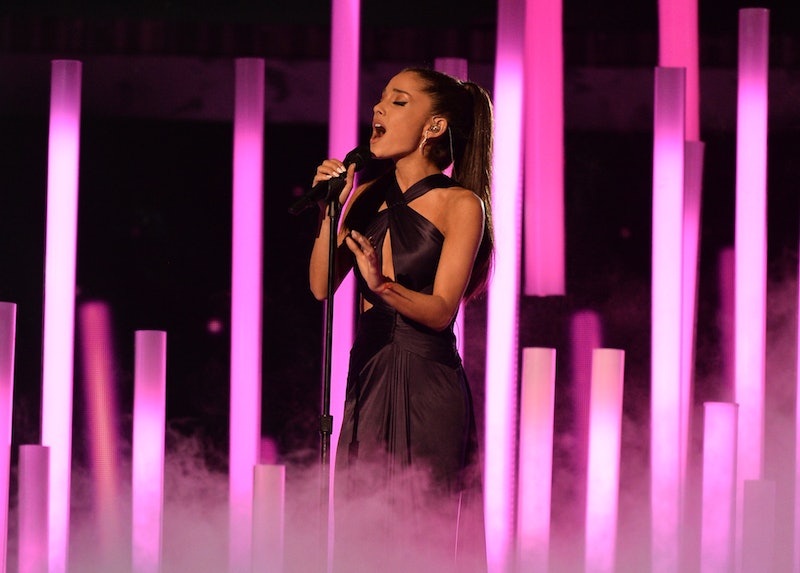 Remember that time that Ariana Grande licked donuts that didn't belong to her and said, "I hate America"? The smudge on the pint-size pop star's squeaky clean image first appeared after videos of Grande's doughnut-licking antics were released last week. Seeing as the police and the health department got involved with her scandal at Wolfee Donuts in California, it was a pretty big deal. Some fans and followers might be wondering if Grande could get in legal trouble for the infamous #DoughnutGate fiasco. Well, now we have our answer: Ariana Grande will not be charged for doughnut licking.

According to TMZ, a representative from Riverside County Sheriff's Department said that the Wolfee Donuts owner does not want to press charges against the 22-year-old. If they had chosen to press charges against the "Problem" performer, it would have been for criminal mischief. Previously, it was reported that the doughnut shop was being investigated for leaving the doughnuts out in the open in the first place. A spokeswoman for the Riverside County Department of Environmental Health said, "During the investigation, the manager did state they normally don't leave donuts out like was shown in the video. The employee went to the back to retrieve freshly made donuts by request of the customer and left the trays out while getting other trays." However, TMZ reported they only received a B as an overall grade as a result of the inspection. Ouch! In any case, it seems like Grande is off the hook now from #DoughnutGate — at least legally. But as we all know, Grande's reputation among fans on the Internet is a different story, if recent tweets from fans and followers about the scandal are any indication.

As evidenced by these fans' reactions, Grande is not entirely off the hook for her doughnut licking, or her comments about America and Americans, for that matter. It probably does not help that she has yet to offer an official explanation as to why she licked the doughnuts in the first place.

For Grande's part, she has apologized twice for her prank caught on video, as well as her comments. The first came in a written statement, as released to outlets like Us Weekly. She said,

I am EXTREMELY proud to be an American and I’ve always made it clear that I love my country. What I said in a private moment with my friend, who was buying the donuts, was taken out of context and I am sorry for not using more discretion with my choice of words. As an advocate for healthy eating, food is very important to me and I sometimes get upset by how freely we as Americans eat and consume things without giving any thought to the consequences that it has on our health and society as a whole. The fact that the United States has one of the highest child obesity rate in the world frustrates me. We need to do more to educate ourselves and our children about the dangers of overeating and the poison that we put into our bodies. We need to demand more from our food industry. However I should have known better in how I expressed myself; and with my new responsibility to others as a public figure I will strive to be better.

The second apology came in the form of a YouTube video that she created and shared with her fans and other viewers. Again, the explanation for doughnut licking is still MIA.

It remains to be seen whether or not we will ever know why doughnut-licking was her action of choice. But one thing is for sure — the tweets, memes, and speculation are far from over.