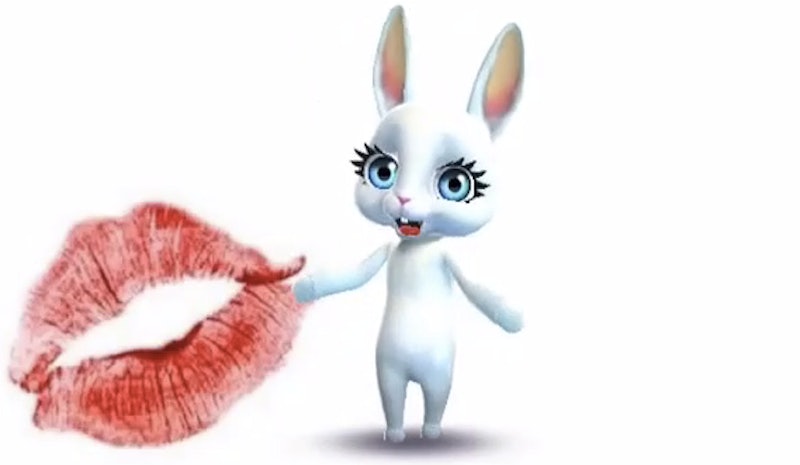 It's happened. I officially don't understand youth culture. I am still a week shy of actually turning 30 but I have preemptively shifted into a more curmudgeonly perspective. What is Zoobe? In short, it's the culprit of my early onset oldness, because I just really don't get it even a little bit. Basically, from what I can tell, Zoobie is an app that lets you pair your voice with an animated animal, and it's funny because you can make it say things that are rude. I mean... has anyone ever heard of a book? Or going outside? Or doing anything that isn't totally inane and useless with their time? I guess this is where we are now: The total meme-ification of culture.

In the name of journalism, I have downloaded the app, and we will now proceed to see if using it will change my opinion and suck me in, as so many stupid apps have before (hello, Candy Crush, or anything that turns photos into gifs). Upon downloading, I have discovered that you have more choices than to just be a bunny, which is what I initially thought. Choosing an animated avatar has already sucked me in a little bit. All an app needs to do, apparently, is give me the illusion of control in order to please me. Sociologically, this might be very interesting indeed. I obviously chose Left Shark.

The next thing the app does is ask you to record your voice. I had no idea what to say, so I sang instead. Then I made the pitch on the voice really, really low, because that's how I imagine a shark would sound if it could sing, and I smiled. SMILING. I think I might be turning a corner here. This is what I made:

The moral is, Zoobe is sort of vaguely fun for 30 seconds, but like everything in youth culture, it's probably going to be forgotten by the end of the week, if not sooner. Sorry Zoobe. Meanwhile, here are some funnier, ruder Zoobes than mine. Be warned, most of these include a lot of very creative cussing, and while the visuals might be safe for work, the audio most certainly is not.

1. This bunny with a numb vagina

5. This cat who has some serious feels about Tony Stark