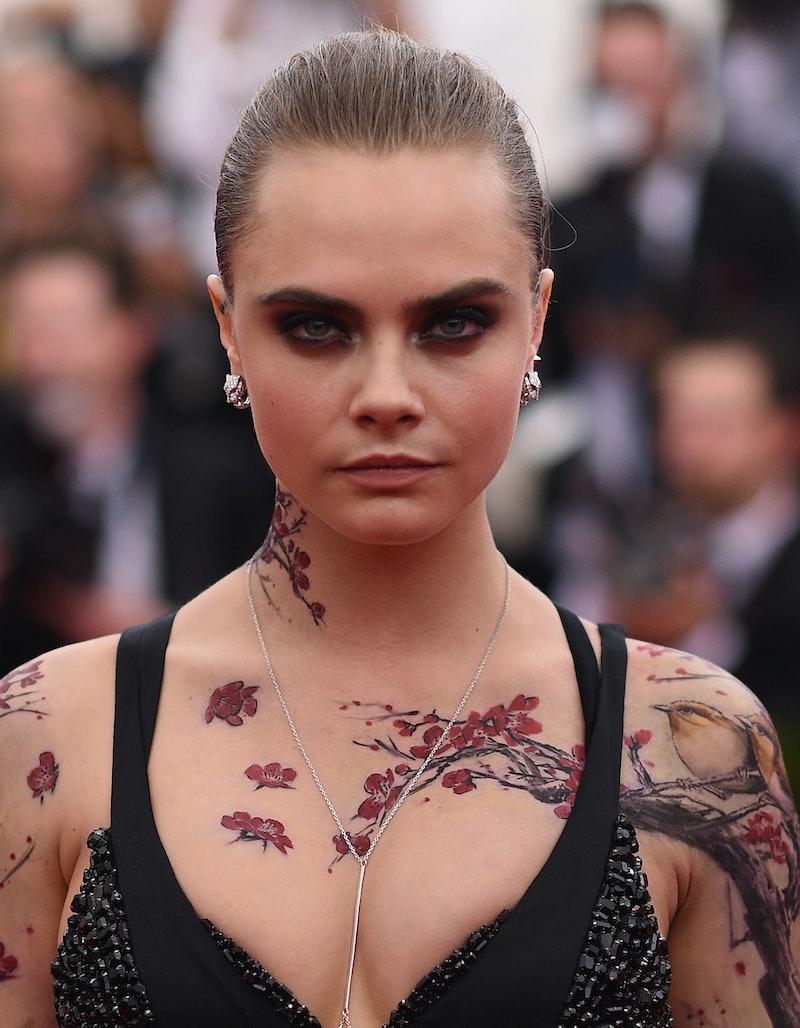 Cara Delevigne is one of the biggest stars in the world, part of T. Swift's Girl Gang and on the cover of Vogue. She is huge, and is only going to get huger. In two weeks, she is making her starring role debut as Margo Roth Spiegelman in the latest John Green adaptation, Paper Towns. Delevigne is revered for captivating looks, perpetually on fleek eyebrows, and all-around coolness — all of which are being channeled in her most exciting role yet: Delevigne plays Enchantress in Suicide Squad.

Next summer is the release of what is guaranteed to be her most badass role ever in the supervillain team-up movie. The trailer was released last week at Comic-Con, and everyone collectively lost their minds. The creepy music. Jared Leto's scary and sexy Joker. Margot Robbie's playful and petrifying Harley Quinn. The trailer, however, not only hints at Delevigne's starring role, but also flaunts her acting chops. First, we see her submerged in a black pond, crying by a wall that may or may not have spells written on it, and, perhaps most frighteningly, we see Delevigne strapped to a bed. Talk about your broad range of emotions.

Looking to the comic books, we can learn a lot about this intriguing character that Delevigne will soon bring to life.

Her Real Name is June Moon

Enchantress first appeared in DC Comics in April 1966. June Moon is a regular teenage girl who stumbled upon a secret passage that housed a demon named Dzamor in an old castle. Cara's "Holy Crap!" face in a cave is likely that moment. The demon instills powers in her that are initially conceived to enable her to become a defender of justice. June, however, has a villainous side that takes over, and she uses her Enchantress powers to fight the good guys rather than to be one of them. In the comics, she is recruited by Amanda Waller (played in the film by Viola Davis) to join the Suicide Squad, aka Task Force X, aka a group of criminals who would carry out secret black ops missions in exchange for clemency.

She Can Transform on Demand

By simply saying the word "Enchantress," June transforms physically, and can access her powerful sorceress powers. By saying the word, she turns from a normal woman into a fully costumed sorceress. She can manipulate energy, walk through walls, heal quickly, teleport, and control inanimate objects. She can basically do anything, like Cara Delevigne herself.

Jay Kelley at MoviePilot hypothesizes that in a movie about a team of villains, Enchantress might be the most villainous of all. June has a hard time coping with her new abilities, which we see her stumble upon in the trailer, and the emotional pressure could be why they are ultimately manipulated for evil. She is powerful, but doesn't quite yet know what her powers are, so they are therefore difficult to contain.

Later in the trailer, we see the ultimate #SuicideSquadGoals shot, but Enchantress is suspiciously not in it.

It is possible that Enchantress is the one the Squad is epically walking towards, or preparing to fight. She has the largest array of powers, and thus is potentially more potent than all of them combined. We'll officially find out how this all goes down next August, but will hopefully continue to learn more info about the film throughout the year.