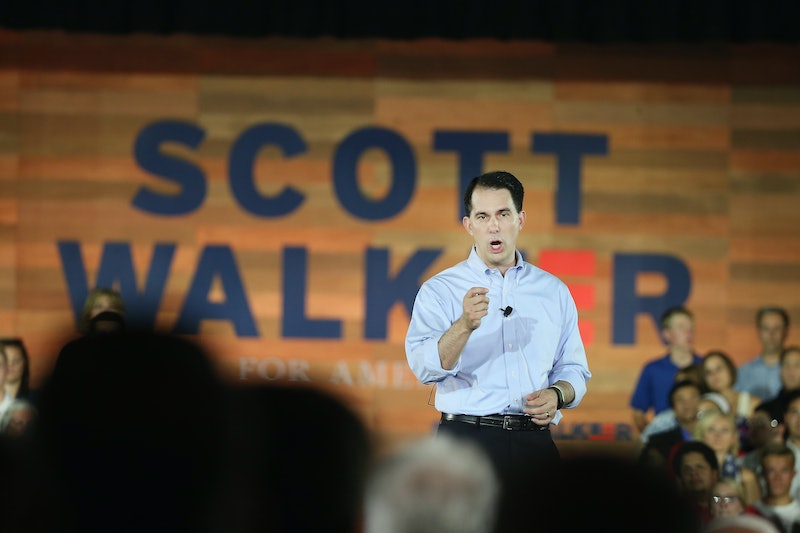 Wisconsin Governor Scott Walker has been preparing for his 2016 presidential bid for months now, but it looks there was one small detail he and his campaign glossed over: website rights. In a subtle bit of digital activism, the domain ReadyForWalker.com is currently redirecting to the Planned Parenthood homepage — a misdirection that could be taken as a slight at Walker's unfavorable track record on reproductive rights in his home state. Walker, who formally entered the 2016 presidential race on Monday, is staunchly opposed to abortion and comprehensive sex education, and plans to sign a 20-week abortion ban with no exemptions for victims of rape and incest.

The website redirection was discovered on Monday, hours after Walker announced his presidential campaign. According to domain tracker Whois.net, an individual registered the ReadyForWalker.com domain more than three months earlier, on April 8, 2015. A Planned Parenthood representative told Bustle that the organization is not responsible for the ReadyForWalker.com domain, or for redirecting the domain to their homepage. The Scott Walker campaign has yet to respond to Bustle's request for comment.

It appears that ReadyForWalker.com is not the only Walker-themed domain that's tricking conservative Internet users. A similar domain, ReadyForWalker.org, is redirecting users to the homepage of the progressive magazine Jacobin. ReadyForWalker.org was also registered on April 8, according to Whois.net records.

Jacobin founding editor and publisher Bhaskar Sunkara told Bustle in an email that ReadyForWalker.org was purchased by a Jacobin reader, not by the publication. Sunkara said he had "no particular comment" on the purchased domain, but he did tell Bustle, "you can guess what socialists think of someone like Scott Walker. :)"

Yes, we can. We could also guess that this stealthy Jacobin reader may be the culprit behind the ReadyForWalker.com / Planned Parenthood redirection, though we cannot confirm this at this time. And if you're out there, dear URL vigilante, ScottWalker2016.com and Walker2016.com are still available.

This isn't the first time a presidential candidate has been burned by failing to register a domain name. Fellow GOP presidential candidate Senator Ted Cruz (R-Texas) forgot to purchase the most obvious domain, TedCruz.com, which is now a black screen with the words, "Support President Obama. Immigration Reform Now."

Meanwhile, Republican candidate Carly Fiorina purchased CarlyFiorina.com, but not CarlyFiorina.org, which was soon turned into an attack page of sorts. "Carly Fiorina failed to register this domain," the website states in plain white text. "So I'm using it to tell you how many people she laid off at Hewlett-Packard." The website then lists 30,000 sad emojis, representing every employee — "people with families" — the former HP CEO laid off. Coincidentally, another URL activist purchased HillaryClinton.net not long after, and had it redirect to Fiorina's campaign.

In 2015, campaign staffers should have the foresight to register every possible domain name to avoid humiliating business and political track records and the like. Yet perhaps the best way for voters to learn about Scott Walker is to visit the Jacobin and Planned Parenthood, where you'll see the widespread effects of the governor's policies laid out right in front of you.