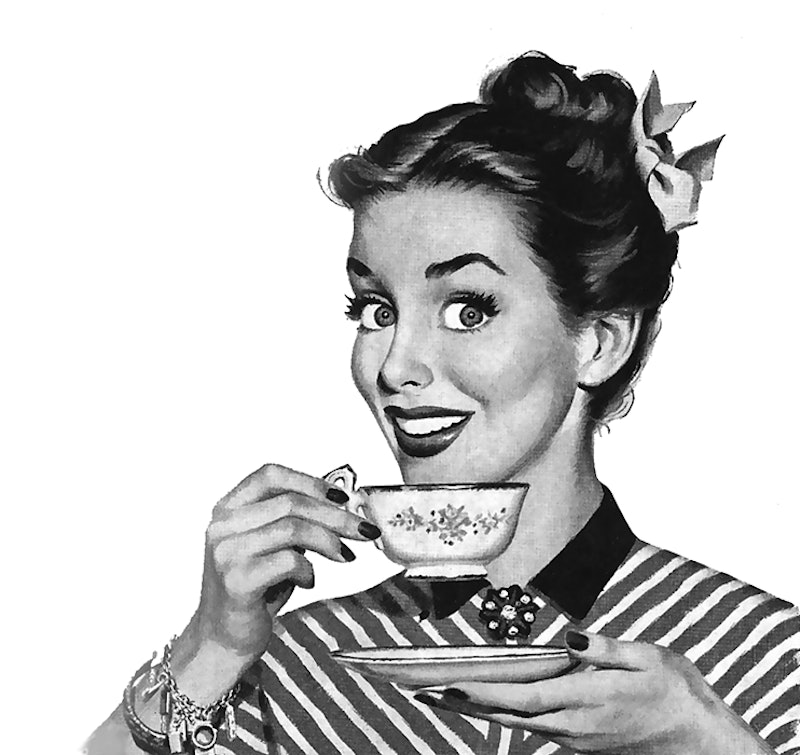 As someone in my early 30s, I do not usually think of myself as old. And yet, once in a while, I have these crabby, “Get off my lawn!” moments in which I find myself muttering about “kids these days” and “common courtesy,” and I have to stop and wonder when, exactly, I turned 87. It’s at these times that I find myself wishing that some of the little courtesies and habits that have gone the way of the dinosaur (or are currently facing extinction) would come back. In the last few decades (and across the whole 20th century, really), our culture has become more and more informal, and in many ways I think this informality is a good thing (I thank the universe for the fact that most women aren’t expected to wear pantyhose anymore Every. Single. Day). But sometimes informality can slide right into being oblivious or, worse, inconsiderate.

Below, I’ve listed 9 simple habits that I think we should reincorporate into our fast-moving, social-media-obsessed, anonymous-Internet-commenting age. We should bring these courtesies back, not simply for nostalgia’s sake, but because they are ways of being considerate, of showing other people that we respect and care for them. And that’s bound to make everyone a bit happier, isn’t it?

When someone gives you a gift or does something to help you, the bare minimum response is a “thank you.” An email is better than nothing at all, but really the best thing is a handwritten note, sent through the mail (remember that??) with a stamp, and envelope, and everything. Sending a real, honest-to-God note tells the person to whom you’re writing that you’ve put thought and effort into thanking him or her, which in turn reflects how much you appreciated the gift.

Do you remember how great it is to get things other than bills and junk mail in your mail box? Email is wonderful for easy, fast communication, but there’s nothing quite as satisfying as sitting down to read a real letter. When I was a freshman in college, my mom and I exchanged letters for about a year ­— long, rambling letters about nothing in particular, stuff that seemed too insignificant or random to even discuss on our cell phones. I loved getting those letters, and I still have all of them tucked away in a box. That’s something, too, that is amazing about handwritten letters: They become keepsakes in their own right, not only because of their messages, but because they are evidence of another person’s body, of the fact that someone else held this paper and a pen because he or she wanted to communicate with you. I’m probably being sentimental, but, for me at least, those objects have meaning that email simply lacks.

When I was growing up, it was standard practice if someone new moved into the neighborhood for my parents to go introduce themselves, often with a plate of cookies or some other gift in tow. Somehow this practice seems to have faded; I’m guilty of not knowing the name of a single neighbor in my fairly large apartment building. But getting to know neighbors, at least a little bit, is such a good idea that I’m kicking myself for not making more of an effort. After all, doing so lets you make a connection with your neighbor in a positive way, so that your first interaction isn’t something like “For the love of all that is holy, can you turn your music down?? You are driving me INSANE.” It’s also just practical to be friendly with neighbors, in case you get locked out of your home, or need a someone to check on your house when you’re out of town. But besides any practicalities, welcoming new people into the neighborhood is simply a nice thing to do — one that will make your community into a friendlier, more closely knit place.

4. Having face to face (or voice to voice) conversations about important things.

Texting is super convenient for when you’re running late and need to tell someone you’re on your way, but, for some people at least, it’s become the go-to method of communication, regardless of how important or sensitive a subject may be. There are some things — from major announcements to breakups — that simply require an actual conversation, without text speak or the ambiguity that comes naturally when you can’t hear someone’s tone of voice.

So often these days, the standard practice when getting to know potential romantic partners is to “hang out,” a maddeningly vague term that often means you’ll be spending time with your would-be companion in a group, wondering if that person likes you as a only a friend, or, you know, LIKE-likes you. The whole thing is confusing and middle-schoolish and can be very frustrating. I was pathetically floored the first time a guy I had recently met asked to take me out on a real date. An honest-to-God, I-like-you-in-a-romantic-way-and-want-to-know-you-better-and-hopefully-go-on-more-dates Date. (Spoiler: I married that guy.)

6. Eating dinner at a table.

I can count the times my husband and I have eaten at home, ­­not in front of the TV in the last two years on one hand. And that’s kind of sad. My justification is that we’re tired after work, and we have lots of conversations at other times, and blah blah blah, but the truth is we’re mostly just lazy. Our culture has become so informal about dining at home that now it can happen whenever and wherever we feel like, but perhaps this is an area that could do with a return to formality. I’m not suggesting that we should dress for dinner, a la ­Downton Abbey (although that would be kind of awesome), but sitting down at a table together and sharing a meal is an important time to talk and be together. Besides, Netflix will still be there after dinner.

When I say “real invitations,” I don’t mean that all events should require heavy paper invites with response cards and wax seals (That would be pretty sweet, though). I mean simply that it would be nice for people to make solid plans, with start times and specific destinations in mind. I’m all for going with the flow (though this post might suggest otherwise), but it’s easy to get tired of conversations that go like this:

Person 1: Let’s hang out this weekend!

Person 1: I dunno, we’ll figure it out later.

And then nothing gets figured out. Whomp Whomp.

If someone does go to the effort of inviting us to an event, through paper invitations, evites, Facebook, or some other medium, the least we can do is RSVP and then stick to it. For formal events, like weddings, RSVPing is essential so that the host can give guest counts to vendors; in these cases, failing to RSVP could literally cost the host money. But less formal events, like dinner parties or anything else to which someone has gone to the effort to formally invite you, also deserve clear responses. If you say you’ll attend an event — even if you simply clicked “Will attend” on a Facebook invitation — you should do so.

Most people would think it rude to whip out a newspaper in the middle of dinner with another person or start drafting a letter while in the midst of a conversation, and yet somehow many feel justified in having their phones out at all times for oh-so-important texting conversations and catching up on Twitter. We owe it to each other to give our full attention to the people we’re with, which means putting the phones away during meals and face-to-face conversations. Maybe you’ll add fewer photos of your lunch to your Instagram account, but what you lose in followers, you’ll make up in quality human interaction.