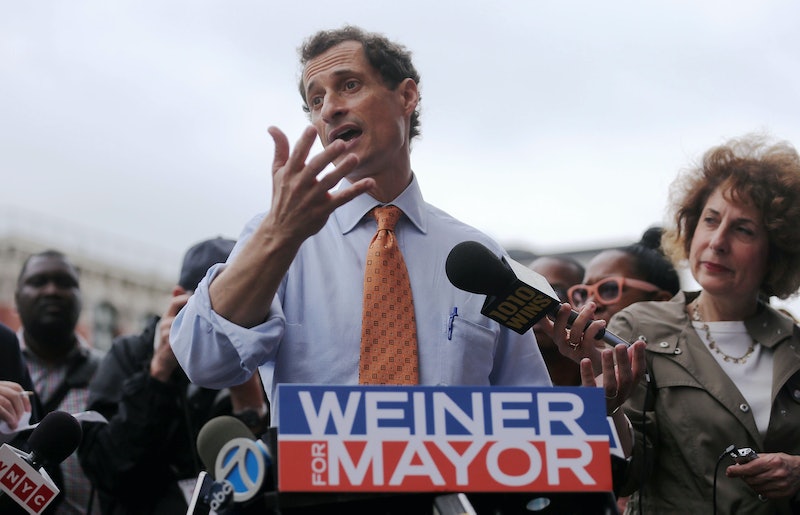 Well, they say there's no such thing as bad publicity. The saying certainly rings true for once-disgraced Anthony Weiner, who is back in the political game in a big way this month.

The former congressman only announced his run for New York City Mayor in late May, months after most of his fellow contenders. As of Wednesday morning, however, he's already managed to take the lead in the race. An NBC 4 New York/Wall Street Journal poll released late Tuesday showed the former congressman with 25 percent support, from the registered Democrats surveyed. His most formidable opponent, current City Council Speaker Christine Quinn, came up short at 20 percent. Just last month, Quinn was leading by 5 percent.

Weiner rose to fame after a relatively unremarkable political career in 2011, when he was exposed for sending some, uh, inappropriate packages over the Internet. After denying his involvement in the scandal for several months, he finally confessed and resigned from Congress in June of that year. If only they'd invented Snapchat sooner, huh Weiner? After laying low for a while, Weiner surprised the nation this spring with his return to politics in such a major arena.

Weiner has drawn attention for his somewhat irreverent behavior since he entered the race, showing up late to events and appearing visibly bored at a recent mayoral panal. Most shocking to some, however, is the amount of support Weiner has retained among New York women. Though his lead among men is much more significant, Weiner still managed to beat Quinn among the women polled 22 percent to 21 percent.

Christine Quinn has had some trouble gathering consistent support from New York Democrats. Her favorability rating has dropped since Weiner entered the race, and the sales figures following the release of her memoir last week? Well, they were downright humiliating.