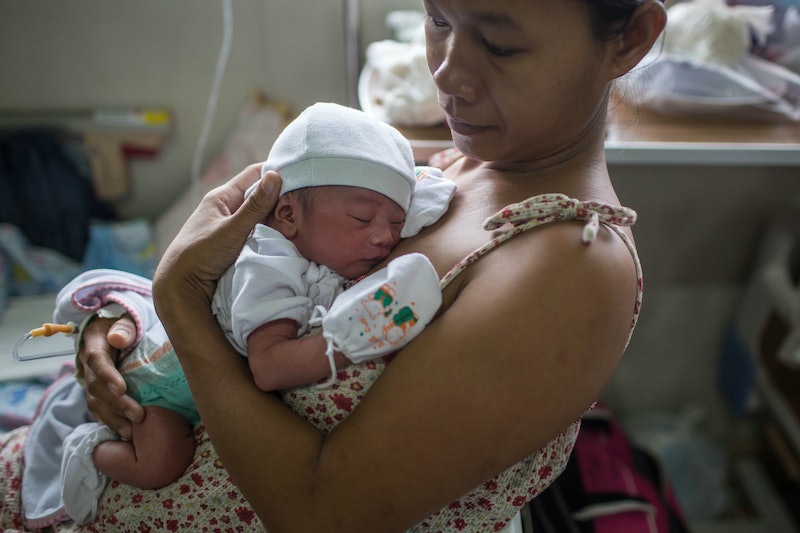 As it turns out, there's a whole lot more to baby poop than meets the eye. (Just hear me out for a second.) A recent study by Case Western Reserve University found that testing a baby's first poop can reveal if their mother drank during her pregnancy — which is pretty huge. But here's why it really matters: researchers, who published their findings in the Journal of Pediatrics, say that being able to detect this so soon after birth can alert them to potential learning issues a child may have down the road. And being able to combat any future cognitive problems could make a big difference in their teenage years.

For the record, a baby's first poop isn't exactly how you're probably picturing it (because you know you are). It's dark green and liquidy, and is actually so different from regular poop that it's got its own name: meconium. As researchers found, whenever meconium turns up high levels of fatty acid ethyl esters (FAEE) soon after birth, it's a telltale sign that the baby was exposed to regular amounts of alcohol in the womb. Though just what those levels were — and whether the levels correlated to the amount a mother drank — wasn't noted in the results.

In a press release for the study, which was actually part of a larger ongoing study called Project Newborn, lead author Meeyoung O. Min, Ph.D. said the findings confirmed the researchers' suspicions. "We wanted to see if there was a connection between FAEE level and their cognitive development during childhood and adolescence — and there was," she said. "FAEE can serve as a marker for fetal alcohol exposure and developmental issues ahead."

Still, that's not to say that the study wasn't groundbreaking. "Although we already knew a mother's alcohol use during her pregnancy may cause cognitive deficits," said Dr. Min, "what is significant is that the early marker, not previously available, predicted this, establishing the predictive validity of FAEEs for determining alcohol exposure in utero."

Typically, the effects of fetal alcohol syndrome are often noticed later on, as a child grows, which is why researchers gave each child cognitive tests many years after birth — at ages nine, 11, and 15. They then compared each child's FAEE levels to their test scores, which was when they spotted strong ties to cognitive development problems, like issues with reasoning, slowed learning, and even lowered IQ scores. However, researchers didn't share what exactly these IQ scores were, if there was a broad range of results, or if the scores were that significantly lower than those of children who've never been exposed to alcohol in the womb.

Still, some eye-opening stats were turned up: 60 percent of the 191 mothers reported drinking while pregnant, with an average of 6.5 standard drinks weekly. (In case you're wondering what "one standard drink" really means, researchers define it as anything containing around 0.5 oz. of pure alcohol.) Of those mothers, 63 percent engaged in what researchers called "risk drinking," though this wasn't clearly defined. In total, 15 of the mothers (around 13 percent) said they had at least 12 drinks per week.

Of course, more research is still needed to be done on this with a wider sampling — this study only tracked 216 children and 191 mothers, which isn't exactly a broad pool. (In total, according to Science Daily, Project Newborn has studied nearly 400 children for the last 20 years, with all kids being born in the mid-1990s.) It's also worth noting that the drinking stats themselves rely on the testimony (and accurate recollection) of each mother, which in itself could have lead to some flawed data. But either way, researchers hope that by identifying any alcohol exposure in babies will make early intervention possible, so that kids can have a better chance of combatting any learning issues that may arise later.