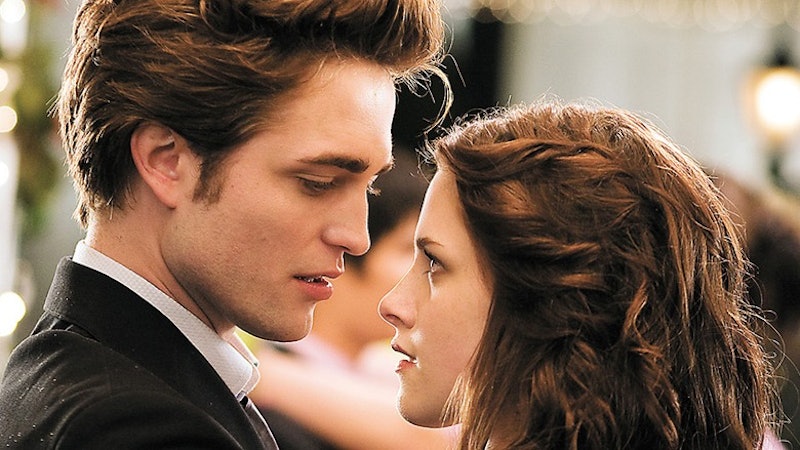 The days of waiting by the mailbox for your latest Twilight installment to arrive might be long gone but that doesn't mean that you have to stop getting your vampire fix. Stephenie Meyer took a break from swimming in her Olympic-sized swimming pool full of money to team up with Lionsgate to hold a contest for young filmmakers to make their own Twilight Mini-Movies and the finalists have just been announced. All of the winners are amazing and here is my definitive ranking of all seven Twilight Mini-Movies (though it was near impossible to pick a favorite because they're all so good).

The "Story-Tellers: New Voices of the Twilight Saga" contest gave seven female filmmakers and 8 female screenwriters (who were carefully selected by Stephenie Meyer, Kristen Stewart, and top-ranking Lionsgate officials) the chance to make their nerdiest Twilight fan-fics come to life.

After a long wait (Meyer announced the contest last year), the seven finalists debuted on The Twilight Saga 's official Facebook page and you should watch them all immediately and go cast your vote here to help choose the winner. So Twihards, sit back, relax, and get psyched over these Twilight mini-movies (which guarantee over an hour's worth of epic vampire action).

This deeply dark and twisted exploration of Alice's past is not only intriguing — it's also superbly done. With excellent cinematography and a complex narrative that weaves a twisted web of Alice's past and present, "The Mary Alice Brandon File" will leave you heartbroken at Alice's tragic story (and even happier that she found happiness with Jasper.

"We've Met Before" details the moment that Alice and Jasper first meet. It's impossible not to fall in love with these characters as they fall in love with each other and, from a cinematic standpoint, the short film is remarkably well-done (and has a great little soundtrack too).

"Sunrise" tells the tale of star-crossed lovers Benjamin and Tia. The story is supremely sweet and the incredibly well-acted. You can almost palpably feel the passion between the characters and I easily found myself immersed in their romantic tale. The special effects in this short were also quite impressive.

"Masque" tells the tale of a newborn Esme who, only with Carlisle's help, is able to overcome her thirst for human blood. The production value of "Masque" is incredible and it's a beautiful short film that you should definitely check out.

"Consumed" goes into the backstories of tortured twins Jane and Alec who are saved from a childhood of persecution by a peculiar young man named Aro. Beautifully shot and acted, "Consumed" gives a much-needed background details to explain the demented ways of the Alec and Jane we knew (and hated) in The Twilight Saga.

"Turncoats" shows the audience the initial meeting between Garrett and Carlisle that spawned their friendship. Set during The Revolutionary War, the narrative of "Turncoats" is very simple and falls a bit flat next to the complexly woven plots of many of the short films above.

"The Groundskeeper" is a good little film but just not quite as good as the rest of the finalists. Less-than-spectacular special effects and a simple (and kinda random) narrative make for a spectator experience that just isn't as engaging as some of its competitors.