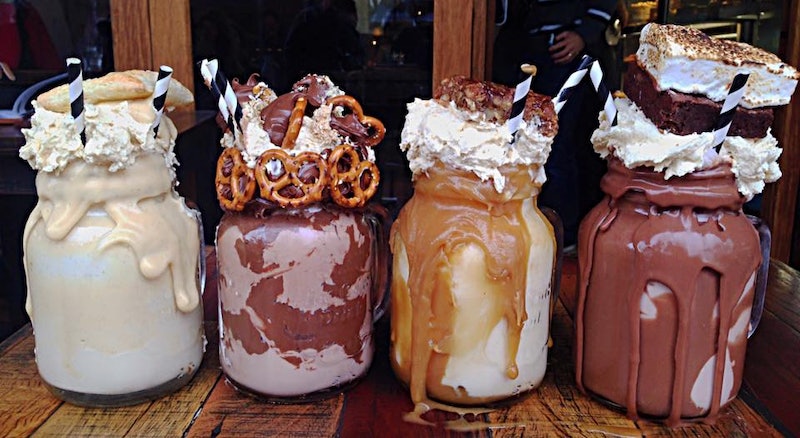 Canberra is Australia's eighth-largest city with a population and, apparently, a culinary affinity for giant foods, similar to that of Arlington, Texas. But Canberra just became a foodie destination when a tiny, not quite two-month-old café called Patissez introduced its Freakshow milkshakes, a new line of ice cream monstrosities that has seriously made the Internet lose its mind. Patissez and its humongous milkshakes have gone totally viral, gaining almost 13,000 new Facebook likes since Saturday alone and 3,000 Instagram followers since yesterday.

The Freakshow is comprised of four milkshakes — The Muddy Pât with marshmallow, brownies, and chocolate fudge; The Nutty Pât with salted caramel ice cream and pecans; The French Vanilla that is served topped with a puff pastry; and The Nutella & Salty Pretzel which is exactly what it sounds like... which is delicious.

The café has unsurprisingly reached a new record, serving a whopping 249 of these giant jugs of goodness in nine hours. If you do the math, that's about $1,763 US Dollars in revenue from milkshakes alone, on a Tuesday in the middle of (Australian) winter. That is $100 more than a round-trip ticket from LAX to Canberra and back this coming Labor Day weekend, according to Priceline.

I can only imagine what Pâtissez's management has in mind for menu additions in month three.

Craving a milkshake? I bet you are. Here are five more examples of mind-blowing milkshakes from around the world to get your sweet tooth screaming, if it isn't already.

Another reason to visit Australia

This nutty Nutella milkshake from the Vogue Cafe in the Macquarie Centre in New South Wales, Australia is served topped with an ice cream cone filled with sour gummy worms.

Add this to your spring break itinerary

The Blind Rabbit Whiskey Bar in Jacksonville Beach, Florida is home to this banana pudding milkshake that is topped with Samoa Girl Scout cookie dust.

Big D's Burgers in Whittier, California is just under an hour from LA in normal, crazy eastbound traffic. You should probably just go ahead and check them out now, because their crazy milkshakes are 100 percent custom and built-to-order with anything they have in the restaurant, so your imagination is the only limit.

Keventers in New Delhi is the home of India's first milkshakes. They serve their shakes in these hefty glass bottles, and have all the classic milkshake flavors, plus a saffron pistachio milkshake that sounds totally out of this world.

Cookout is the South's most fantastic fast food establishment. They start you off with 46 flavors of milkshakes on their menu, and then you learn that you can combine two flavors... or three flavors at no extra charge. There are literally tens of thousands of possible flavor combinations, all for less than $3.