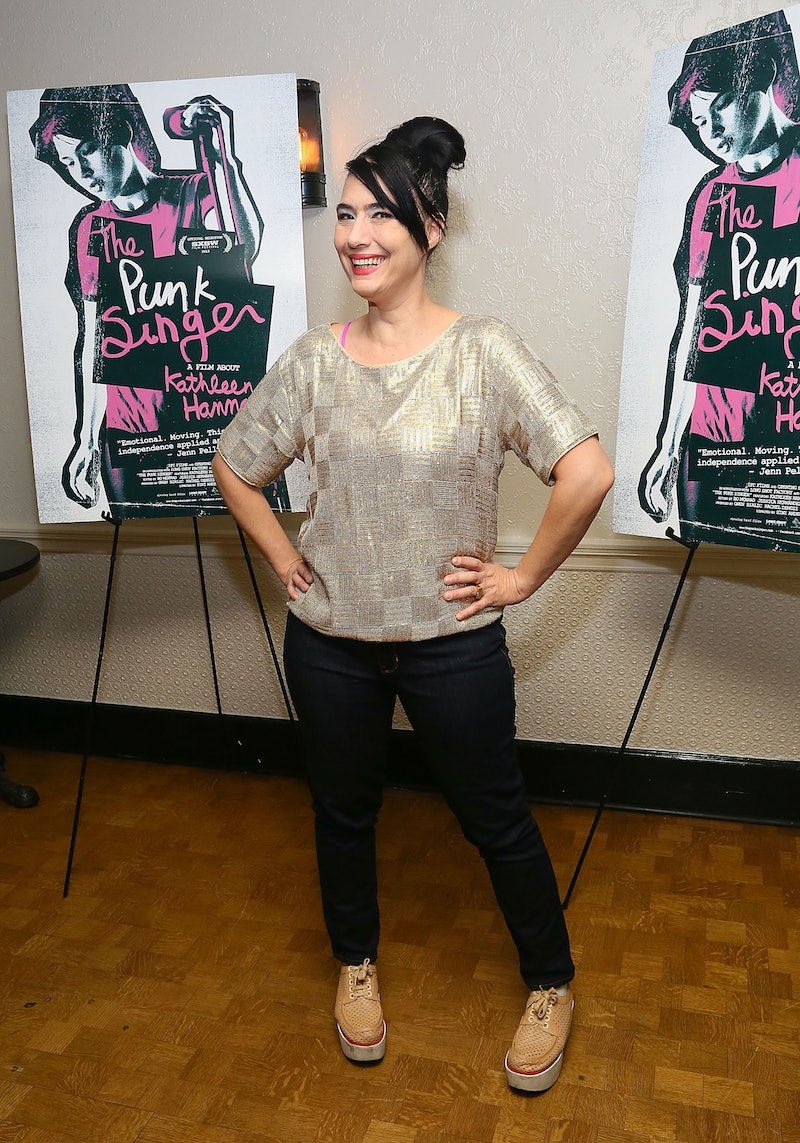 It goes without saying that '90s nostalgia is pretty hot right now, so much so that publications will churn out listicles about "10 Things That Happened in the '90s!" just to get page views. But these articles have a selective memory. They're the '90s seen through the lens of a Millennial — they remember Rugrats but they forget Twin Peaks. They remember Nirvana but they forget Bikini Kill.Thankfully, The Punk Singer came out on Friday, and it's a movie that won't let us forget about the importance of the Riot Grrrl movement in music history.

The film follows Kathleen Hanna, the lead singer of Bikini Kill and more or less the face of the Riot Grrrl movement in the '90s. Hanna is a fierce feminist who advocates for women in the music scene, and has since then gone on to front other great bands like the dance-punk band Le Tigre and her current band The Julie Ruin.

But the movie doesn't just focus on Hanna, it focuses on the whole Riot Grrrl scene. Members of bands like Bratmobile and Sleater-Kinney (yes, Carrie Brown of Portlandia makes an appearance) talk about how Hanna and others in the scene advocated for women in music: they had a "girls to the front" policy to create a safe space for women at shows, they wrote zines like "The Riot Grrrl Manifesto" that mixed vague feminist theory with a punk aesthetic, they created powerful songs that talked about women as human beings and created a positive community among women.

Hanna and the entire Riot Grrrl scene were incredibly important because they empowered women to get involved in rock music and they shook up the boy's club of punk rock. And they're still incredibly important today. Punk bands with powerful women's voices like Bikini Kill (and X-Ray Spex, and Be Your Own Pet, and The Runaways, and Pussy Riot, and The Slits...) not only inspire women to strive to be taken more seriously in music, they help women find their strength as feminists — at least, they sure as hell did for me.

But while Nirvana will be remembered as one of the great rock bands of the '90s, bands like Bikini Kill and Bratmobile will only be remembered as part of a "social movement" in rock, not for their music. And sure, the argument can be made that these bands weren't doing anything new sonically. Most Riot Grrrl bands played hard, fast and minimally, not unlike the American punk bands of the late '70s. But musically, these women were going places that few women had gone before: they were screaming, they were whining, they were angry, they were political, and they were demanding their rights as human beings through their lyrics.

Unfortunately, the problems that Riot Grrrl addressed still exist, and they're perhaps even more complicated than before. As a movement, Riot Grrrl greatly underserved women of color, a problem which Hanna makes note of in the film. Women are still a rarity in rock music, and even when women bands and artists make it big they're rarely taken seriously (just take a look at any number of articles written about HAIM or Savages). Normally, having a documentary made about your life suggest that you're done, you're retired, you're a part of history. But as Hanna says in the movie's trailer, she's not done. Neither are the ideas behind the movement she worked so hard for. It's just getting started.