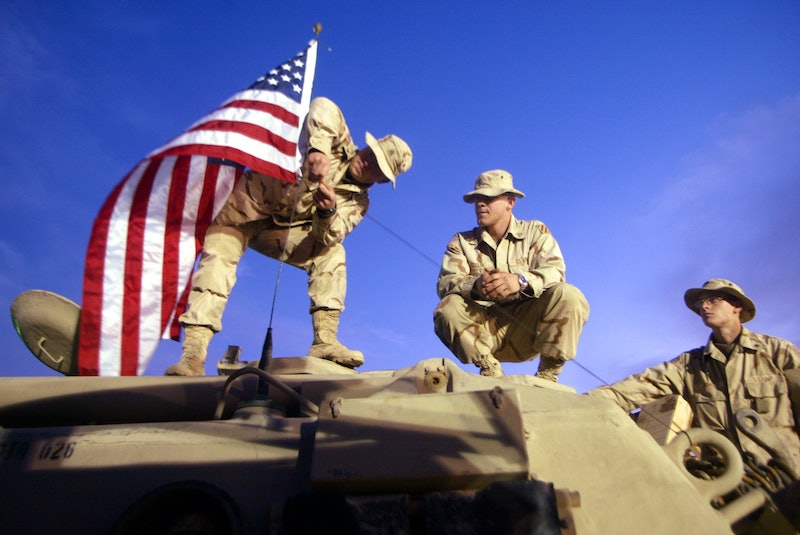 At least one bit of progress could be achieved soon: The Pentagon might soon lift its ban of transgender people openly serving in the U.S. military, but there are still plenty of things transgender people are currently banned from doing that greatly decrease their quality of life. On Monday, Defense Secretary Ash Carter said the government would be studying "readiness implications of welcoming transgender persons to serve openly." The White House has encouraged the military to lift its ban on transgender people serving, but the Pentagon wants to determine what kinds of legal or medical issues might arise, the Associated Press reported.

A working group of senior military and civilian leaders will examine the implications for six months. They will objectively look at the issue and its cost, as well as potentially develop uniform guidelines. "We have transgender soldiers, sailors, airmen, and Marines — real, patriotic Americans — who I know are being hurt by an outdated, confusing, inconsistent approach that's contrary to our value of service and individual merit," Carter said.

Although it's unfortunate that transgender people are currently forbidden from serving and dying for their country, they lose more rights than that — in the United States and around the world. Here's a list of eight outdated and heinous bans on the transgender community today that prevent individuals from feeling as free as the people around them.

A Florida bill, if enacted, would require everyone to use the public restroom for the gender they were assigned at birth. Lawbreakers could face criminal charges for entering the restroom for they gender they identify with. Many schools and colleges have similar bans.

A 2012 ban in Canada prevents transgender people from even boarding a plane. Although it does not mention the trans community directly, the rule says, according to Business Insider, "An air carrier shall not transport a passenger if … (c) the passenger does not appear to be of the gender indicated on the identification he or she presents."

A Pennsylvania court ruled a college could prevent a transgender student from using the men's locker room. That student was denied a safe place to change and was eventually expelled for using the male locker room, according to The Daily Caller.

In Russia, transgender citizens are banned from driving. No one with a "sexual disorder" is allowed to drive, which includes "fetishists, voyeurs, exhibitionists, and transvestites," according to The Guardian.

Identifying How They Want Their Driver's Licenses

Many DMV facilities have prevented transgender drivers from changing their licenses from male to female or even wearing makeup in their photos. One transgender woman protested by showing her bare chest and was then arrested, though if she was really male as the DMV employees suggested, it would not be illegal, according to The Huffington Post.

Living In The Homes They Want

Many states, such as New York, have no protection against housing discrimination toward transgender people, though they do stop discrimination based on sexual orientation, according to Fusion. Landlords are free to deny housing to members of the trans community.

Having The Right To Control One's Own Body

Nineteen countries in Europe require that people wishing to change genders undergo genital removal surgery and sterilization before legally being allowed to make the transition, according to Reuters. This practice has no legal basis, and the argument is that people need to prove that they're really serious about medically changing their gender. The list includes France, Italy, Greece, Romania, Ukraine, and more.

Many countries have bans on the transgender community. In Kuwait, cross-dressing is a crime. Other countries simply make sexual reassignment surgeries illegal. These bans all dehumanize and disrespect the trans community.