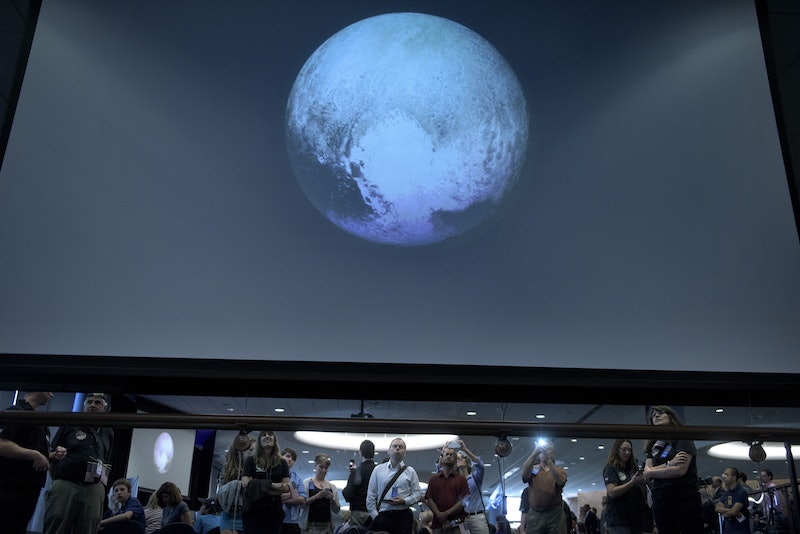 Pluto finally has a face. On Tuesday, NASA officials released the first ever close-up images of the dwarf planet as its probe, New Horizons, swept past. It was a celebratory moment and likely only the first amazing discovery out of dozens that the tiny probe will beam back to Earth over the next handful of years — but it's not the only mission that's yielded some unforgettable footage in the past few decades. Over the years, a variety of telescopes, manned missions, and interstellar craft have given us a massive stockpile of space photos sure to make even the bravest feel small.

"New Horizons is the latest in a long line of scientific accomplishments at NASA, including multiple missions orbiting and exploring the surface of Mars in advance of human visits still to come," said John Holdren, assistant to the President for Science and Technology and director of the White House Office of Science and Technology Policy, in a statement to the press on Tuesday morning. "As New Horizons completes its flyby of Pluto and continues deeper into the Kuiper Belt, NASA's multifaceted journey of discovery continues."

So what's next for the probe? As it takes to the outer limits of the solar system, New Horizons will likely encounter a plethora of important puzzle pieces that will allow NASA scientists to decipher and reassemble the origin story of our home star system.

"Pluto was discovered just 85 years ago by a farmer's son from Kansas, inspired by a visionary from Boston, using a telescope in Flagstaff, Arizona," said NASA Science Mission Directorate administrator John Grunsfield in a statement on Tuesday. "Today, science takes a great leap observing the Pluto system up close and flying into a new frontier that will help us better understand the origins of the solar system."

While we wait for even more gorgeous imagery from the New Horizons team, there are plenty of other images stacked up in the archives for us to nerd-out and feel insignificant over.

Earth, As Seen From Saturn's Rings

On July 19, 2013, the Cassini space probe, which was tasked with investigating the planet Saturn, circled to the dark underbelly beneath the planet's icy rings and snapped this photo of the earth. Our moon, which appears as a faint white point of light in the glowing haze at the bottom of the image. Feeling tiny yet?

In this image, every point of light is an entire galaxy — yup, even the tiny ones. The Hubble Space Telescope snapped this pic in September 2009 and after an intense year of review by a team of dedicated astronomers, officials from the European Southern Observatory in the Atacama Desert in Chile determined that one particular galaxy, which was barely visible in the upper left-hand corner of the image, was more than just another dot on the canvas. At 13.1 billion light years away, the galaxy's blurry appearance led scientists to an astounding discovery — galaxy HUDF.YD3, which held an estimated 1 billion stars, was actually born when the universe itself was just 600 million years old and filled with hydrogen fog. To date, it is the oldest known galaxy in the known universe.

Honestly, don't even try to fathom that distance — it's too much work.

Jupiter is a massive planet. In fact, it's so big, over 1,000 Earths could fit inside it and its Great Red Spot, a swirling storm that has persisted for some 400 years, is twice the size of our home planet but a lot less fun (winds inside of the storm clock in at an average of 270 miles per hour). Sitting shyly at the bottom of the image is one of the planet's moons, Ganymede, which is nearly the size of the planet Mars. Compared to Earth and its moon, both Jupiter and Ganymede are absolute titans, respectively.

At first glance, this photo, taken in April this year, seems like a really nice vacation photo or an image out of Star Wars — but it's actually the real deal. Snapped by the Mars Curiosity Rover as it passed through the Gale Crater, this sunset is — quite literally — otherworldly.

"Dust in the Martian atmosphere has fine particles that permit blue light to penetrate the atmosphere more efficiently than longer-wavelength colors," explained NASA officials on their site. "[This] causes the blue colors in the mixed light coming from the sun to stay closer to sun's part of the sky, compared to the wider scattering of yellow and red colors."

It's a gorgeous photo, to be sure. But word to the wise: you'll need to find a house-sitter for your plants and cat, because a trip to the red planet will cost you around 18 months — and without sounding like a downer, given the distance of Mars from the Sun, it'll probably be a lot less magnificent to watch when you're actually there.

If you're looking for a photo that will leave others awestruck, this is it. In January this year, NASA and European Space Agency (ESA) officials released for the first time the highest resolution image ever taken by the Hubble Space Telescope of our neighbor galaxy, Andromeda (or M31). The photo, assembled in pieces due to its sheer magnitude, is filled with over 100 million stars and is essentially a composite view of just one tiny corner of the galaxy itself. At over 2 million light years from Earth, Hubble's HD Andromeda pic — which you can actually zoom-in on to ridiculous levels (seriously, you need to try it) — is like "photographing a beach and resolving individual grains of sand," explained researchers in a statement.

Welcome to the preposterous enormity of space — have a seat before you pass out from the thrill.

More like this
All The Most Stylish Winter Wardrobe Staples You Can Buy On Walmart.com
By Jessie Quinn
The 8 Best Walking Shoes For Metatarsalgia, According To A Podiatrist
By Lauren Moison
60 Small, Inexpensive Gifts People Love
By Julie Peck and Claire Epting
Amazon Just Released These Incredible Cyber Monday Deals & They're Selling Out Fast
By BDG Commerce
Get Even More From Bustle — Sign Up For The Newsletter