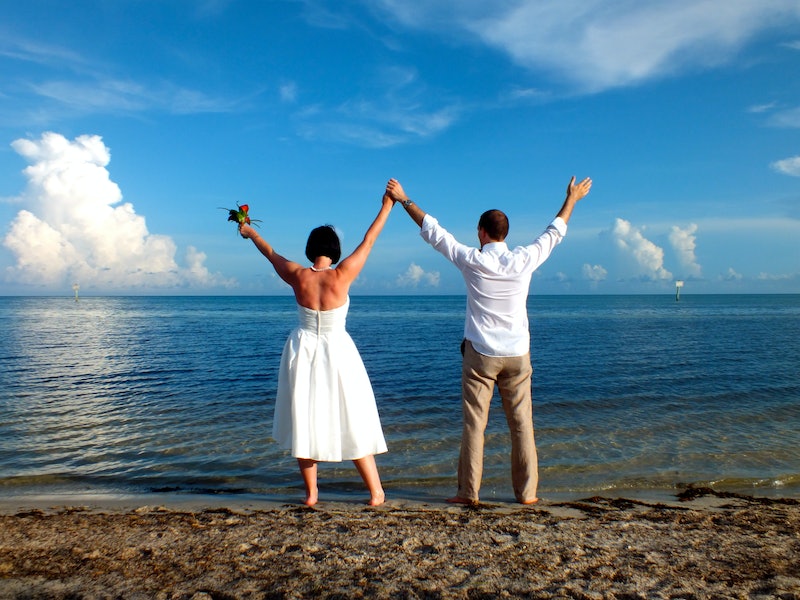 If you've been recently proposed to, I have two things to say to you. First, congratulations. Second, you need to hear me out on these reasons to elope. Yes, I said elope. Yes, I really do mean it.

Wedding season is upon us, which means you're likely either spending most of your weekends dressed up as a bridesmaid or you're chowing down on your choice of chicken, steak, or vegetable dishes at your friends' weddings. Don't be fooled. While throwing an enormous wedding may seem like a great idea to some people, there are plenty of reasons to skip the soiree and do something simple with just you and your significant other.

We're living in the 21st century, and that means that you don't have to play by the rules anymore when it comes to getting married. There really are so many benefits to choosing to elope, and not all financial (though I'm not going to lie, the amount of money you will save is not something to be taken lightly).

But enough chitchat. It's time to get to the cold, hard facts. Take a read through this list of six reasons to elope, and tell me the thought of ditching a wedding hasn't at least crossed your mind. I'm just saying to think about it ...

1. It's So Much More Romantic

Here is how "elope" is defined in the American dictionary:

"To run off secretly to be married, usually without the consent or knowledge of one's parents."

Running off with your lover in secret is kind of as romantic as it gets. It doesn't matter if anybody else knows — neither of you really care — and absolutely no frills are necessary. If you think about it, a whole traditional ceremony and band of matching bridesmaids and groomsmen is kind of dorky, anyway. Sometimes, it's just more fun to keep a secret ... at least, for a little while.

2. It's About You And Your Fiancé

The problem with weddings is that everybody who is invited thinks it's about them. Your bridesmaids are concerned with how they look, your mom wants everything done perfectly, and your guests are looking to be well-fed, well entertained, and comfortable throughout the night. I say forget all that. Getting married is about you and one other person. You can always celebrate later with your families, but let that one special moment take place without an audience.

I doubt I need to go on a long rant about how much money you'll save if you skip the wedding and decide to elope, but just in case you have no idea how much a wedding costs, I'll fill you in. A "cheap wedding" is usually in the $10K to $15K range, and those numbers just keep growing the nicer the event. The average price of a wedding in 2014 was $29,858, just to throw you an estimate.

4. You Don't Have To Stress Out About Planning A Wedding

Bridezillas ... we've all dealt with them. They're horrible. In fact, it's at times hard to imagine that there's really someone worth loving under that control freak, emotional wreck of a person. Guess what? If you don't have a wedding, you will never, ever have to become a Bridezilla. Do us all a favor ...

5. You Can Go Anywhere To Exchange Vows

Another huge perk of eloping? You can do it anywhere! Location weddings are beyond pricey, and asking your friends and family to fly halfway around the world for you isn't always possible. But that being said, if it's just you and your hubby-to-be, your options are literally limitless. At the bottom of the Eiffel Tower? Done. In the middle of Central Park? No problem. On a sailboat along the Mediterranean coast? You got it.

6. You Can Focus On The Honeymoon

As much fun as a wedding can be, the honeymoon is where it's at. With all that money you're saving from not throwing a wedding, you can actually afford to go somewhere amazing as a newlywed. Think about it this way: Would you rather spend thousands of dollars for your second cousins to be eating filet mignon, or spend thousands of dollars to take a tour of Europe that ends with a week's stay on some tropical island? I thought so.