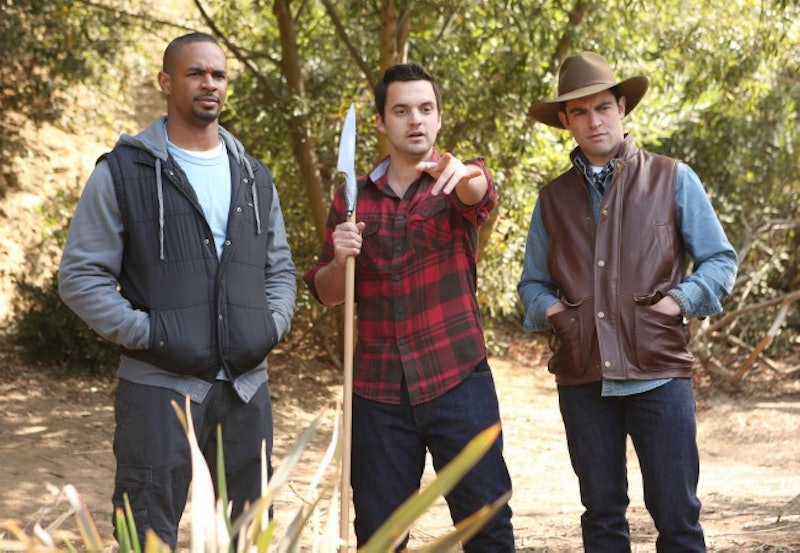 What do you do with a group of insane people? Do you send them out into the woods where all they have is each other, some basic supplies, and mother nature? No, you do not, which is exactly why that's precisely what New Girl did for its Thanksgiving episode. "It'll be the ultimate test of our MANHOOD and our SURVIVAL skills," Nick says to the guys, at which point both I and Jess realize this will in no way end well.

The last two Thanksgivings also weren't quite successes — the flashback montage can be summed up with "[Burning] turkey!" "Dead body!" and "I think I'm into your mother" — and all signs point to this year following suit. Especially when Cece shows up (in quite the snazzy vehicle), because who wouldn't want to spend a weekend in the woods with, as she puts it, "[her] ex-boyfriend and his friend [she] just made out with"?

Cece and Winston bond over their mutual hatred of camping and the fact that they never get a say in the group's activities. The whole situation actually seemed uneventful for a couple of minutes — until it's revealed that Nick didn't bring any food for the trip because he likes the idea of them hunting and foraging for their dinner. It is at this point that the gang realizes their Thanksgiving dinner will be 96 warm beers if they don't get their Survivor shit together, and ASAP.

Here at the highlights/thoughts from thereon out:

Overall, this episode was a pretty solid showcase of the truly great ensemble New Girl's got going for it — and considering the recent (and genuinely great) re-addition of Damon Wayans Jr.'s Coach, it was a great opportunity to let them all have some time to actually gel together. And no one got rabies!