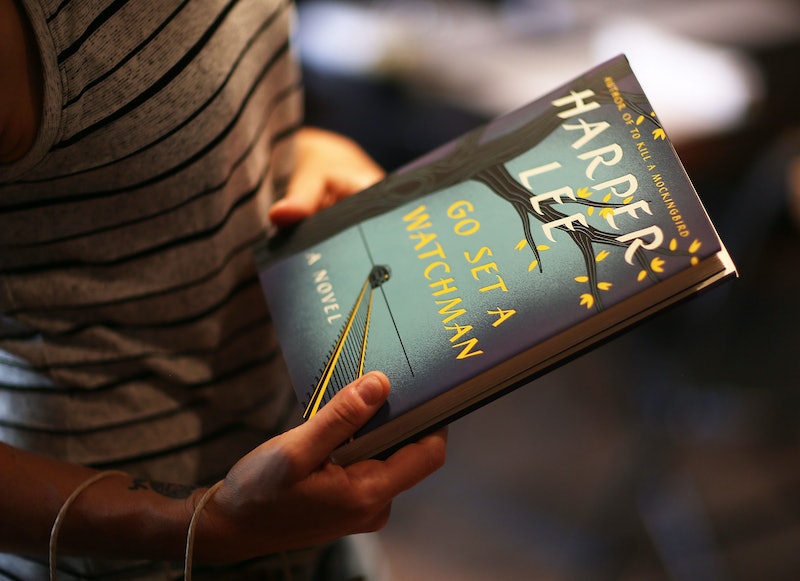 Scout Finch, the beloved narrator of Harper Lee’s To Kill A Mockingbird , has hung up her overalls and traded in her girlhood nickname, meeting readers 20 years later as the more formal “Jean Louise” in Go Set A Watchman , released Tuesday. Despite the agonizing “to read or not to read” battle that readers and fellow writers have been having for months, I was outside the bookstore at a 6:15 a.m. Tuesday waiting to pick up a copy. I couldn't wait to find out what had become of my adored Scout, Jem, Dill, Atticus, and Boo.

But readers who were looking for a satisfying conclusion to the story that began in 1933, when Scout was just a 6-year-old, aren’t going to find it in Go Set A Watchman . In many ways, Watchman offers even less closure than Mockingbird did, ending with an impassioned Jean Louise who is only just starting to enter the throes of some very adult growing pains. This could be largely because — SPOILER ALERT — Atticus’s famous court case (in many was the defining element of To Kill A Mockingbird) has a completely different ending in Go Set A Watchman . Tom Robinson not only survives, he has been acquitted, meaning that 26-year-old Scout’s hard-won beliefs about racism, equal rights, and justice haven’t been tested yet.

Alas, with growing pains comes growth, and that’s exactly where readers reunite with 1950s-era Jean Louise: as a young woman who is just beginning to relearn some of the lessons Scout had mastered at 6. Perhaps, as a result, Jean Louise has become a little more real — I know there were tons of lessons from my own childhood that I’ve had to revisit in my 20. It's only natural that Scout would, too.

Here are 6 important lessons from Go Set A Watchman that Jean Louise Finch is learning in her 20s, and that we can learn from, too.

You Can Take The Girl Out of Her Hometown, But You Can't Take... Well, You Know

The first pages of Go Set A Watchman find Jean Louise on a train, traveling back to Maycomb from her self-made new home in New York City. As is true of every young, urban transplant, her friends and family all wonder aloud when she's planning on giving up on the city and returning to her hometown for good. 26-year-old Jean Louise struggles with her identity a lot — alternating between spending time with old girlfriends and realizing her urban experiences have led her to outgrow them, but also taking a page out of Scout's book during a gossip-worthy, impromptu night time swim with her love interest, Henry Clinton. At times she can't imagine returning to Maycomb forever, but nonetheless, she knows the town is in her blood.

Your Parents Can't Be Your Heroes Forever

This is the drama at the center of Go Set A Watchman: Jean Louise's relationship with her father is evolving, from her childhood understanding of him as a God-like figure, to her adult realization that he is just as complex and deeply flawed a human as everyone else. Although these dynamics are played out across the backdrop of desegregation and the Civil Rights Movement, the issue at the heart of Watchman seems to be less about race and more about the relationship between father and daughter, and what happens when our loved ones fail us.

When Jean Louise and her father are discussing the bus strikes of the Civil Rights Movement, Atticus questions her about her thoughts on the NAACP. Jean Louise responds:

I don't know anything about that bunch except that some misguided clerk sent me some NAACP Christmas seals last year, so I stuck 'em on all the cards I sent home.

It is this laissez faire-type attitude that will come back to haunt Jean Louise throughout Go Set A Watchman — although she claims to have strong-held beliefs in favor of civil rights, she hasn't exactly acquired the knowledge of current events and politics necessary to back them up. When it comes time to defend her assertions to her litigation-versed father, Jean Louise seems a little lost.

Relationships Are a Lot More Complicated Than They Seem…

In the wake of the landmark Brown vs. Board of Education decision, which declared segregation of public schools unconstitutional and overruled the right of individual states to maintain segregation at the state-level, Atticus Finch has joined the Maycomb "Citizens' Council," an organization that Jean Louise determines is pro-segregation, and anti-Civil Rights. She is horrified by Atticus' association, and vows to sever her relationship with her father forever. During an epic, Scout-style showdown in the street outside the Maycomb courthouse, Atticus tries to explain that his presence at Citizens' Council isn't as racist as Jean Louise believes it to be (even though it pretty much is.) Jean Louise is faced with the complicated decision of whether or not she is able to continue to love her father, after discovering he isn't the man she always knew him to be.

...Except When They're Not

Jean Louise faces a similar struggle with her long-time love interest, Henry Clinton. Although she begins Go Set A Watchman by telling Henry: "I'll have an affair with you but I won't marry you," she's not entirely sure she believes that. She comes to a decision, however, after discovering Henry holds the same pro-segregation beliefs as her father, and agonizes over what to do about her potential engagement. She asks her Uncle Jack what she's going to do, and, unfazed, he replies: "What you will eventually," aka let him down easy. So, at least that's taken care of.

As readers learn that the Scout of To Kill A Mockingbird is a far cry from the Jean Louise of Go Set A Watchman, Jean Louise is learning that her beloved Maycomb hasn't remained untouched by time either. The town of the single paved road has expanded the reaches of its asphalt. Her childhood home is gone: sold and turned into an ice cream parlor. Her family is not as intact as it was in her Mockingbird days. Darling Dill went to war in Italy, and stayed there. And Atticus, perhaps the most important to her of them all, has become a man entirely unfamiliar. A resounding lesson for Jean Louise and Harper Lee's readers alike: things change. You just gotta roll with it.