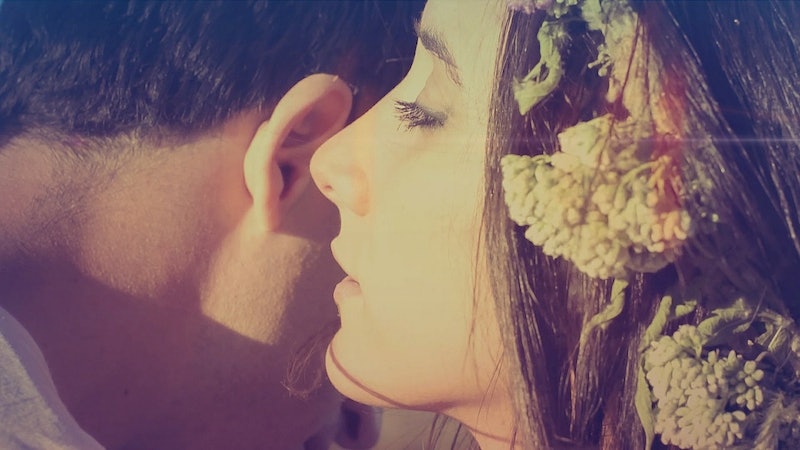 What are the major highlights of your relationship? Probably your first date or anniversary, maybe the first time you had sex, maybe when you met the parents. All really important things, but there are few events we give as much significance as saying "I love you" for the first time. It holds a lot of weight — I would argue too much. It seems like such a big deal that I start to get butterflies in my stomach thinking about it. And not cute, sparkly butterflies — drunk, angry butterflies who are ready to pick a fight. I know I may be alone here; or at least, all the romantic comedies tell me I am. It's considered a relationship milestone, a celebration we share with our friends as soon as someone has said it to us, and has a gut-wrenching, suffocating embarrassment when it's said but not returned. But why?

It's something that, somewhat confusingly, we use with relative nonchalance when talking about puppies or coffee, but then we use the exact same thing to describe the other the top, consuming emotion. And I'm just not sure it should be the be all and end all. It's just words, and words are malleable. Why do I think so? Well ...

1. It Can Be Overused

So, I thought "I love you" sort of had a big build-up, but it looks like I may have been wrong. One study by YouGov for eHarmony found that, when it comes to saying "I love you," men on average took 88 days, while women took 134. Even more surprising is that 39 percent of men dropped the L bomb in the first month of dating, as did 23 percent of women. Really? That just seems ... it just seems like a lot.

Maybe I'm a cynic or just emotionally constipated, but I feel like if someone was dropping it in that early, it would be a little disingenuous, or less special somehow. The only person who has said it that fast was my first boyfriend, and even though we were two hormone-crazed teenagers, I still laughed, assuming he was kidding. I mean, how can you know me at all in a month? Although there are studies that show you say I love you more often earlier in a relationship, (and my favorite Shakespeare sonnet is about that — 102, if you're wondering), but if you want to give it more meaning, sometimes not saying it to everyone you date for a bit makes it more significant.

2. Some of Us Have Trouble Saying It

This is probably me fighting my own corner a bit too much, but I think it's completely OK to not say "I love you" all the time, for the simple reason that some of us aren't great at saying it, and we shouldn't be forced to do what makes us feel uncomfortable. Yes, if it's vital to your partner to hear it regularly, there's going to have to be some compromise, as both people's emotional security is important. But don't forgot that for some it's less fireworks and flowers and more anxiety and knee sweat.

Why is it so difficult for some of us? It may be because saying "I love you" all the time isn't as much of a standard as you might think, and it's actually a fairly recent phenomenon. A 2005 study from Baruch College and CUNY "found that saying 'I love you' hasn't actually been a longtime standard; in fact, use of the phrase was found to have increased since the beginning of the 20th century," according to Mic. I don't find this surprising, in part because I've found that Americans say it a lot more than some other cultures.

I use it way more than my friends here in the UK do. While I'm bad at it in relationships, I say "I love you" all the time when it comes to friends, and certainly every time I say goodbye to, I don't know, anyone on the phone. Some of my British friends were surprised that "I love you, bye!" is a common sign-off, and I had to explain it doesn't necessarily have the same weight it does to them. Which brings me to ...

3. Words Are Ambiguous, Actions Less So

Saying "I love you" can mean a lot of different things. I say "I love you" really easily in everything but romantic relationships, because there are so many different ways to "love" someone. Which makes things complicated, because sometimes I want to say it to someone I'm seeing in a "you're important to me and I care about you way," but avoid it because the larger-than-life status it has in romantic relationships leaves me tongue tied.

Bottom line: Saying "I love you" can be a great and integral part of your relationship if it's important to you and your partner, but this is a real "actions speak louder than words" situation. As psychologist Jeremy Nicholson told Mic: "Saying 'I love you' on a regular basis is not always indicative of relationship status. A better indicator is how the partners actually treat and care for each other. Without loving behaviors backing it up, saying 'I love you' is just an empty expression." More than that, it can be a Band-Aid to cover bad behavior or relationship problems. So focus less on who says it more or how quickly they say it, and more on how you show it. It's just three little words, after all.