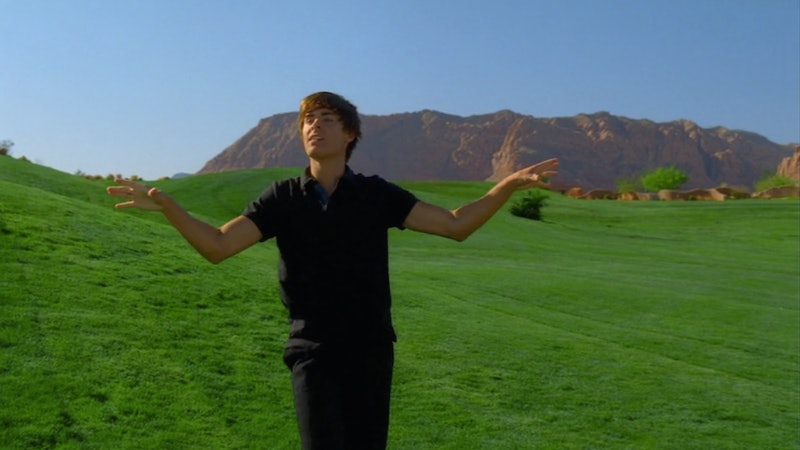 One of my deepest, darkest secrets (that I'm about to share with the Internet) is that after I did the bad movie re-watch for High School Musical a few months back, I immediately powered through High School Musical 2. I just had to know what happened next with Troy and Gabriella and those weirdo twins and their penchant of spontaneously bursting into song. Thing is, sequels tend to be a lackluster follow-up to the original, but when it comes to High School Musical 2, it is either equal or greater than it's predecessor... in terms of ridiculousness.

The Wildcats are excited to start their summer vacation, hoping to hang with friends, save up money for college, and maybe kiss and stuff. But trouble arises when Sharpay decides (in a truly inexplicable way, because I thought she got over this in the first movie) to break Troy and Gabriella up. Will her scheming put a wrench in their relationship AND the Lava Springs Country Club talent show? Yeah, I'm sure you already know the answer to that, but whatever.

What time is it? It's summer time! And subsequently time to recap all the most ridonculous moments from High School Musical 2 in this week's bad movie re-watch.

1. When Chad is cradling his basketball in the middle of class.

2. When Sharpay and Ryan, the former seemingly the most hated woman in East High, are hounded by teenage paparrazi.

Why is everyone using professional grade cameras, is the real mystery here.

3. When Troy, for no reason, otter slides down the hall in ecstasy.

4. When Sharpay, for no reason, decides she MUST be with Troy.

Because he's the most "primo boy in school" basically, even though she SEEMINGLY got over this last semester. Even if she was harboring the pent up lust, why now? Why wait until summer?

5. When Kelsi strategizes to have pretty much the entire school participate in her song for the Lava Springs Country Club talent show.

Which kind of defeats the POINT of a talent show, which is to compete against each other... but whatever.

6. "My singing career began and ended with the East High Winter Musical."

This seems to violate so many safety regulations, and also common decency.

8. When literal children are making food at the ritziest country club in Albuquerque or wherever they are.

Definitely not worth the price of your membership passes.

9. When these two teenagers get alone time on an empty field and don't bone.

You're a disgrace to your hormones.

10. This dog lives a more glamorous life than I do.

I'll let Sharpay adopt me if it means I can get my roots touched up more than once every three months.

Which is like the one thing you're not supposed to do next to the pool.

12. When Gabriella, a lifeguard, RUNS NEXT TO THE POOL.

13. When these freaking teenagers use a late-night pool rendezvous to run around and almost kill themselves but DON'T BONE.

15. The fact that Kelsi ships Troy and Gabriella more than the actual fans of this garbage.

Imagine how creepy it would be if you were creatively inspired by your friend and her high school boyfriend's relationship. All I'm saying is that, when I was a teen, I wasn't walking around carrying musical sheets titled "Shelby and Jim's Song."

"Except when I breathe."

Hard to say, because the last time I saw one like that was eight years ago.

18. "Her mom makes the best brownies in the entire world."

19. When Chad and Troy have an explosive break up.

You don't even need to know the context, their eyes say it all.

20. When Troy is CRADLING HIS BASKETBALL IN BED.

What is wrong with these people?

21. ALL OF THIS MASCULINE RAGE.

22. When Sharpay gets upset and her minions STROKE HER HAIR in sympathy.

Actually it's more of a gentle tug, if I'm being honest.

23. I don't know who offends me more with their outfit.

Sharpay, who's wearing some dollar store formalwear that looks like it was made from a mermaid's skin...

24. Again, don't really know how it's a competition if all of New Mexico participates in one song.