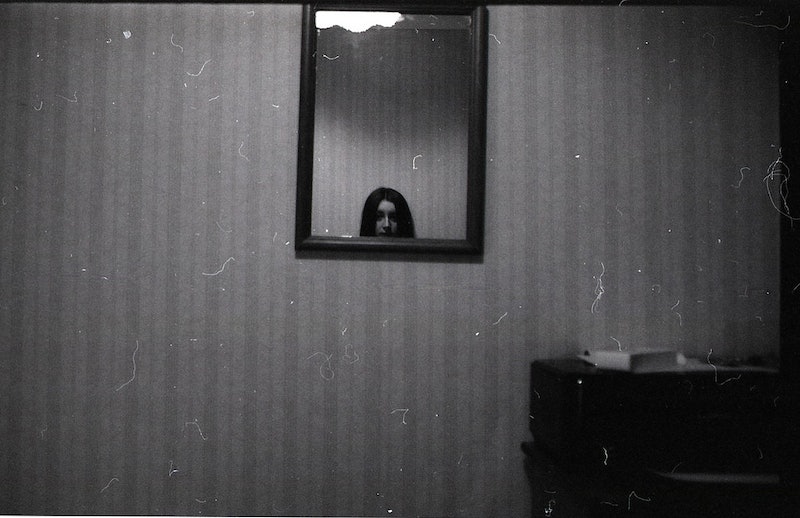 You can buy just about anything online these days, so it's probably not surprising that there are a huge number of haunted things for sale on eBay. Or perhaps more accurately, a huge number of supposedly haunted things; it's kind of hard to prove whether or not an object is actually haunted until you're experiencing any phenomena associated with it live and in person. But hey, at least the listings are all good spooky stories that spark the darker areas of our imaginations, right?

I'll admit that I find it kind of interesting that it's possible to sell a haunting on eBay. We learned earlier this week that the online marketplace's seller policies forbid the sale of intangible things; haunted objects, however, seem to be kind of a loophole for that rule. Sure, the alleged hauntings may be intangible — but the objects themselves are very real, so hey, if you want to bring a candelabra that may or may not come with a ghost attached to it into your own home, that's totally your call.

Do I think any of these objects are actually haunted? Not so much. I suspect that, as was the case with this guy who was trying to sell a "ghost chair" on eBay back in 2014, these kinds of listings mostly use the “IT'S HAUNTED!” angle as a marketing tactic. There are loads of dolls for sale on the auction site that are all plenty creepy on their own; maybe the thinking is that, by calling them haunted as well, they'll be more likely to sell — or more likely sell for a higher price. It's worth noting, by the way, that many of those dolls have multiple identical listings, as well as the fact that many different dolls with the exact same auction title all come from the same seller — observations I would generally file under the heading “red flag.”

In any event, here are 10 supposedly haunted things you can purchase (or at least bid for) on eBay right this very minute. Just, y'know, in case you feel like tempting fate.

This is just one of the many, many dybbuk boxes currently available on eBay — and I'm almost positive they're all capitalizing on the viral eBay dybbuk box story that was so popular it eventually got its own movie. Allegedly all these boxes house malicious spirits thought to be the displaced souls of angry dead people; they were nearly all acquired by the sellers at estate sales (or at least, that's what the listings claim), and most of them specify that you must be 18 or older to bid on them. I think the “IT'S TOO LATE TO TELL ME” message scratched into the surface of this one is a nice touch, although I'm pretty sure the red substance covering it is just wax (not, y'know, blood or anything). You've got until Saturday to place your bids — the starting price is $24.99.

If you type “haunted” into the eBay search bar, you will retrieve over 56,000 results, a huge portion of which belong to dolls. Again, I suspect most of these allegedly haunted dolls are just creepy-looking toys with a label slapped on them to help them sell better; the fact remains, however, that they're still… well, creepy-looking toys. The listing for this porcelain doll describes it as “highly active”; she doesn't seem to be evil — just mischievous — but apparently she might call out your name and hide your belongings from you. She's not actually up for auction, but the Buy It Now price is $60.

Yes, I know — it's another doll. But I kind of think Bubbles deserves his own entry, because, well… just look at him. The seller purports to be a paranormal investigation group who periodically auction off some of their finds on eBay; Bubbles, however, wasn't originally part of an investigation. The listing states that one of the group's members acquired the doll at a yard sale, and for about a week afterward, everything was fine. Then a strange smell began emanating from Bubbles — an aroma similar to burnt hair. The group member's cat started hissing at it, and when the group finally began investigating, they captured some freaky-sounding EVPs in the room in which the doll was being stored.

If, for some reason, you would like to own a supposedly haunted (or just plain creepy) clown doll, you have until Sunday to place your bids.

Weirdly enough, this stuffed animal is also called Bubbles. I am, however, also absolutely positive that Bubbles the Bear's backstory is bullshit. There are just way too many tired old haunting tropes in his listing: Allegedly many of his owners have met “untimely deaths”; he's seemingly “made from cloth from a psychotic serial killer” (although I am unclear of the source of the cloth — are we talking about cloth from a piece of clothing owned by a serial killer? Or, inexplicably, a serial killer who was actually made of cloth? Have the Sackpeople from Little Big Planet gone rogue or something?); sometimes the serial killer “escapes his cell in hell and visits Bubbles,” at which point Bubbles' behavior gets a little questionable; and so on and so forth.

All of this makes me… skeptical.

But if something about Bubbles appeals to you, he can be yours for a starting bid of $59.99. The auction runs until Friday.

To be fair, the shoes themselves may not actually be haunted; they were seemingly retrieved from a haunted estate, though, so maybe there's some residual energy or something hanging around them. Anyway, no one really knows who “Lisa” was — all we know is that the shoes belonged to her, evinced by the fact that her name is scrawled on the soles. According to the seller, the estate from whence the shoes came was super haunted; in many ways, it's a classic gothic tale, complete with its very own Bertha Rochester. The nursery in which the shoes were found was “considered a 'safe' room in the house,” although it did still apparently play host to a few of the children who once lived there. If you want these suckers, they're only available at a Buy It Now price of $25 — but hey, if you purchase them and suddenly hear midnight tap dance rehearsals going on in your house, at least you'll know where the noises are coming from.

6. An Open Vortex (Or Rather, This Painting)

The seller claims to have acquired this oil painting, which they purport to be an “open vortex” into the spirit world, from an “OLD HAUNTED plantation house in Georgia." Since bringing it into their home, they have allegedly heard disembodied voices, seen figures walking around in the wee hours of the morning, and spotted a strange glow rising up from the pitcher depicted in it. A friend of the seller thinks there might be djinn living inside it, which is doubly interesting when you consider the fact that objects claiming to house djinns are all over eBay. It's available for the Buy It Now price of $666. (I see what you did there, mysterious eBay seller…)

Not much information is available about this old carousel horse; unlike many of the listings for “haunted” objects on eBay, this one lacks a long and involved origin story. It does, however, apparently play music without being wound and attracts high readings on EMF detectors. An “older woman's voice” has also allegedly been heard “more than once” during investigations centered around the horse. You can Buy It Now for a mere $40, if you're so inclined.

Funny — I remember owning a jewelry box that looked pretty much exactly like this one when I was a kid. Mine didn't have a spooky story attached to it, though; I'm pretty sure it just came from our local small-town toy store. According to the seller, this jewelry box was once owned by a young woman who died in plane crash. After her death, her mother allegedly started hearing noises coming from what was once her bedroom — where, of course, the jewelry box resided. When the mother went to investigate, she reportedly encountered a full-body apparition of her daughter screaming in the middle of the room (which, to be honest, I find a little unbelievable). EVPs allegedly captured in the box's presence include “Take me home” and “Hello”; it also seems to trigger high EMF readings. Bid on it for $40 between now and Friday, or Buy It Now for $75.

Like the carousel horse, this item's listing doesn't have much of a backstory, although a short paragraph written entirely in capital letters notes that you can seemingly hear the girls depicted in the photograph laughing at you on occasion. The seller states that his or her neighbor found it during a renovation and wants it gone — and apparently it measures highly on EMF meters, too. Do with all that what you will. It can be yours for the Buy It Now price of $75.

Side note: Does anyone else find it kind of suspect that all these sellers claiming that they “just want their haunted objects gone” are still asking for not-insubstantial sums for them? You'd think that if they just wanted to get rid of them as fast as possible, they'd set the asking price to something like 25 cents. Maybe that's just me, though.

The same folks who put Bubbles the Clown up for auction also have this bracelet available for a Buy It Now price of $199. Found in the home of a woman named Helen who came from a long line of spirit mediums, it seemingly produced a whole bunch of ectoplasm during the group's investigation:

But hey, if an ectoplasm-y bracelet doesn't do it for you, there's plenty of other “haunted” pieces of jewelry up for grabs on eBay!