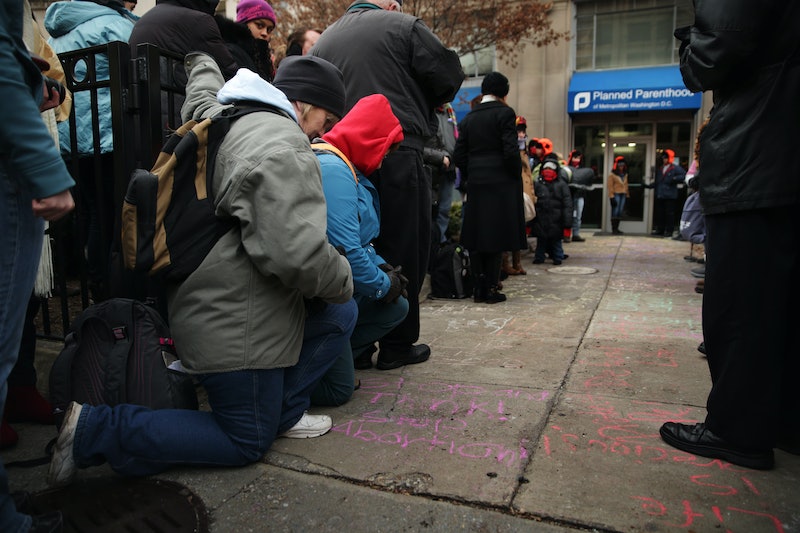 By now, chances are you've heard about Live Action's Planned Parenthood video, which used a hidden camera to record Planned Parenthood's senior director of medical services, Deborah Nucatola, at lunch with undercover reporters she believed were medical researchers looking for donated fetal tissue. The video claims it caught the organization selling body parts from aborted fetuses. In addition to being heartbreaking and morally repulsive, the idea of selling for profit the body parts of humans in general and fetuses in particular is incredibly illegal and could spell an end to the famed women's health clinics — if the allegations were true.

Eric Ferrero, Vice President of Communications at Planned Parenthood, addressed the video's allegations in a statement on the organization's website:

At several of our health centers, we help patients who want to donate tissue for scientific research, and we do this just like every other high-quality health care provider does — with full, appropriate consent from patients and under the highest ethical and legal standards. There is no financial benefit for tissue donation for either the patient or for Planned Parenthood. In some instances, actual costs, such as the cost to transport tissue to leading research centers, are reimbursed, which is standard across the medical field.

Nothing gets the attention of large groups of people quite like hysterically-presented, misleading information, and the video is exactly that: Distorted facts presented as the gospel truth. From the title, "Planned Parenthood Uses Partial-Birth Abortions to Sell Baby Parts," to the breathlessly lurid headlines regarding its release, everything about the video — which was created by Center for Medical Progress, the little-known activist group apparently started by a Live Action worker, and promoted and distributed by said anti-abortion group Live Action — is carefully crafted for maximum shock value, using tactics perfected by decades of right-wing political groups.

That same strategy is employed in the current video. Because she thought the undercover reporters she was speaking to were medical industry professionals, Nucatola treated them as such, speaking candidly and in detail about the medical procedures used during abortion. Such frank discussion is understandably difficult to listen to as a layperson.

"I'm going to basically crush below [the abdomen], I'm gonna crush above, and I'm gonna see if I can get it all intact," she says, referring how she makes sure organs remain undamaged for donation. Later, she discusses the best way to to "evacuate an intact calvarium [head]" during an abortion. To someone unused to such clinical terminology, the entire conversation may be immensely difficult to watch.

What the video doesn't make clear, though, is that the medical profession requires a certain emotional distance from its subject matter. Doctors can hardly operate on someone if they're uncomfortable with the sight of blood. Squeamishness doesn't last long in medicine. As a result, medical professionals can be far more blunt with each other than they are with people outside the field. In the video, Nucatola believes she is speaking as a doctor to her peers in her field; if this were in fact the case, it would have meant that she wouldn't have had to worry about coming across as insensitive. Her job literally depends on the ability to emotionally distance herself from her work, a fact which would have been understood by fellow medical professionals. Is Nucatola's clinical detachment distressing to hear? Absolutely. But it's also a fundamental part of her profession.

Unfortunately, though, these "researchers" were as far from medical professionals as possible, and they used her candidness against her. Nominally, the video's purpose was to accuse Planned Parenthood of violating 42 U.S. Code 247e, which prohibits the purchase or sale of human body parts, and 42 U.S. Code 289g-2, which specifically prevents the sale of body parts from aborted fetuses. These allegations, of course, are based on no evidence. The laws apply to the sale of body parts, not reimbursement for the transportation costs associated with donated tissue. Because some organs can deteriorate within 24 hours of the time of abortion, this can be an expensive process, and medical professionals can be reimbursed for the transportation costs involved, as Slate points out.

These videos are par for the course for Live Action and its ilk, which are known for sensationalist, heavily edited accounts of the medical side of abortions. And in 2013, Live Action made the news for its hidden-camera videos in which pregnant volunteers "lured clinic personnel into sham doctor-patient conversations," William Saletan wrote on Slate. The footage of these "appointments" were then heavily edited into clips designed to make abortion clinics look like monstrous baby farms.

Despite Planned Parenthood's response to the allegations, CMP maintains the claims, and many viewers will probably buy into what this video is selling. The tactics used to attempt to discredit Planned Parenthood are the same tropes that the anti-abortion machine has been employing for decades.

First and foremost is every right-wing politician's standby tactic: emotional manipulation. It can be seen in the very wording used to discuss abortion — anti-abortion groups named themselves "pro-life" in the 1970s, which by extension cast opponents as "anti-life."

In the video, this can be seen in the focus on the gory reality of abortion, which Nucatola discusses freely with people who, again, led her to believe they were medical professionals and therefore were presumably used to talking about the subject in this manner. The doctor uses appropriately professional terms regarding abortion, but the video refers to donating tissue as "baby parts harvesting." Any layperson may shudder at that particular phrase — which is likely exactly the reaction CMP was looking for.

Abortion can be bloody, invasive, and slightly terrifying. So is open-heart surgery. So is hip replacement. Some people can't even donate blood without fainting. Medical procedures can be upsetting and scary, especially if you don't see them every day, but that's hardly restricted to abortions. Anti-abortion propaganda tactics, like those used by Fox News and Sarah Palin, want you to think that abortion is the most "barbaric" medical procedure in the history of mankind — even though research has shown that legal abortions are actually safer than childbirth.

Similarly, much anti-abortion rhetoric relies on a barrage of technical terms that confuse the audience, based on the idea that people fear what they don’t understand. Just a quick read-through of the anti-abortion group the Lozier Institute's article on how emergency birth control supposedly causes abortion will leave your head spinning, unable to sort through all the references to "copper ions" and "immunosuppressive proteins."

The CMP footage is chock-full of this particular tactic as well. The highlights video is essentially eight minutes of Nucatola describing a medical procedure, interspersed with a few laws against the sale of body parts.

Statistical manipulation is hardly a strategy unique to anti-abortion activists. The concrete nature of statistics makes it easy for people to couch them in misleading rhetoric, then claim that they're supported by the numbers. The CMP project doesn’t feature many statistics, but it does have an entire “document vault” devoted to deceptive facts and figures.

Perhaps the most blatant example is its implication that Planned Parenthood makes $86,400 a year from selling fetal tissue, based on one document from one clinic stating that it received $50 per specimen from Stem Express for shipping costs. This was then multiplied across four clinics and 48 weeks to accuse Planned Parenthood of making almost $100,000 a year from donated tissue.

Thanks to careful manipulation and rhetoric from anti-abortion activists, Planned Parenthood has taken another PR hit, and no matter how false any of claims of illegal activity may be, the damage is done. On the other hand, I have faith in the public: Hopefully, Live Action's strategy is transparent enough that we'll stop falling for these tactics soon.

More like this
25 Inspiring Quotes From Black Women To Celebrate Black History Month
By Kyli Rodriguez-Cayro and JR Thorpe
6 Organizations Fighting Police Brutality That You Can Support Right Now
By Syeda Khaula Saad and JR Thorpe
8 Charities To Donate To During Black History Month
By Alexis Morillo
Matt Hancock’s TikTok Is The Most Matt Hancock Thing Ever
By Sam Ramsden
Get Even More From Bustle — Sign Up For The Newsletter
From hair trends to relationship advice, our daily newsletter has everything you need to sound like a person who’s on TikTok, even if you aren’t.