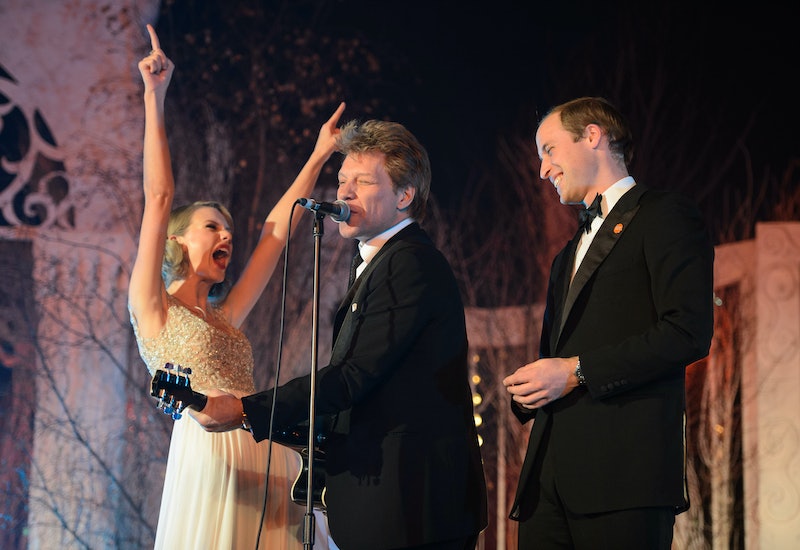 So, Taylor Swift, Bon Jovi, and Prince William walk into a bar. What exactly happens next? Nothing with a hilarious punchline, but it does make for pretty much the best video I've seen on the Internet today (which is saying a lot because the Internet is full of adorable cat memes and videos of corgis on slides). The clip: Taylor Swift, Jon Bon Jovi, and Prince William all performed "Livin' On a Prayer" last night together at Kensington Palace, for a benefit that supports a charity to assist homeless youth. Because when you're famous, the karaoke sessions you get to participate in sometimes include English royalty. Just facts.

There's not much I can really say to breakdown the video without ruining the whole thing for everyone, so it's probably better that you just hit play and experience the magic for the first time yourselves. But, I can set it up: Swift, Bon Jovi, and Prince William were all in attendance at the Winter Whites Gala in Kensington Palace, when Bon Jovi got on stage to perform his most famous hit/the best karaoke song ever, "Livin' On a Prayer." Prince William was eventually asked to join Bon Jovi on stage, and he accepted — only if Swift could come along too. The rest, of course, is now YouTube video history. Gotta say: It was a pretty graceful performance given how drunk everyone probably was at the time.

Furthermore: Though they all look like besties, according to Swift earlier in the night, it was actually her first time meeting Prince William. When asked about meeting him, Swift is reported to have responded, "Awesome! He was very funny. I was really happy he was funny." Now they're probably BFFs.

You can check out the clip below.