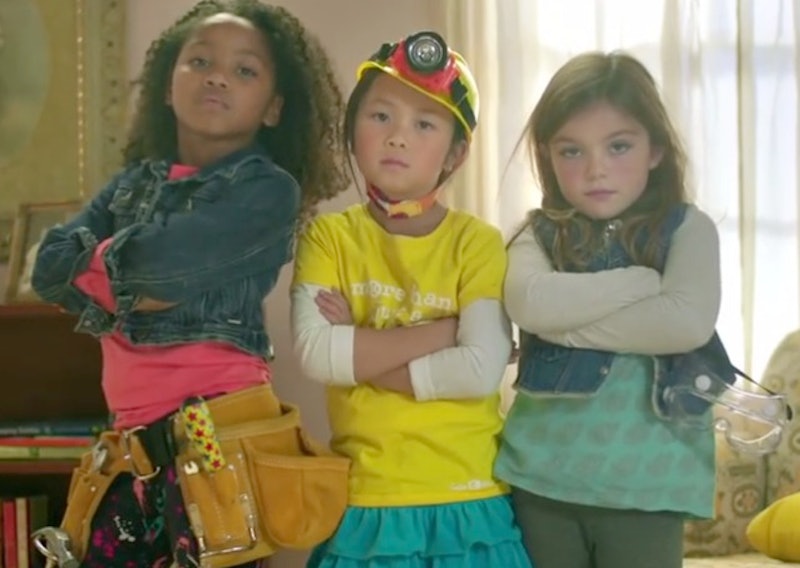 Some backstory: A little while ago a new company called GoldieBlox — which makes interactive games and books designed to spark or nurture an interest in engineering in young girls — produced a commercial for their first line. It had girls tiring of the usual pageantry they were being presented with and going off on their own to invent cool stuff. The song in the back of this video was a parody of Beastie Boys' song "Girls," with lyrics about wanting girls to "do the dishes" and such replaced with, instead, lines like how these girls want to “build a spaceship” and “code a new app.”

The Beastie Boys were unhappy with this, saying that late band member Adam Yauch said on his deathbed that he didn't want any of their songs used in commercials. GoldieBlox fired back, making it a question of fair use law.

Now it seems as if the conflict is winding down, because GoldieBlox has posted a new version of the ad, with no new video but with the "Girls" parody replaced with an instrumental track — they also posted a letter of apology to the band on their blog. Here's a bit:

We want you to know that when we posted the video, we were completely unaware that the late, great Adam Yauch had requested in his will that the Beastie Boys songs never be used in advertising. Although we believe our parody video falls under fair use, we would like to respect his wishes and yours.

[...] We don’t want to spend our time fighting legal battles. We want to inspire the next generation. We want to be good role models. And we want to be your friends.

We also recommend you go read GoldieBlox's "An Apology To My Future Daughter," because that one is even more thought-provoking.

More like this
Mollie King & Stuart Broad Just Shared The First Pic Of Their Baby
By Sophie McEvoy
Stormzy Was The Ultimate Fanboy When He Met Taylor Swift
By Sophie McEvoy
How The Thanksgiving Episode Of 'Gossip Girl' Changed Pop Culture History
By Gabrielle Bondi
Then Vs. Now Photos Of The 'Enchanted' Cast In 2007 & The Sequel's Stars In 2022
By Marina Watts
Get Even More From Bustle — Sign Up For The Newsletter