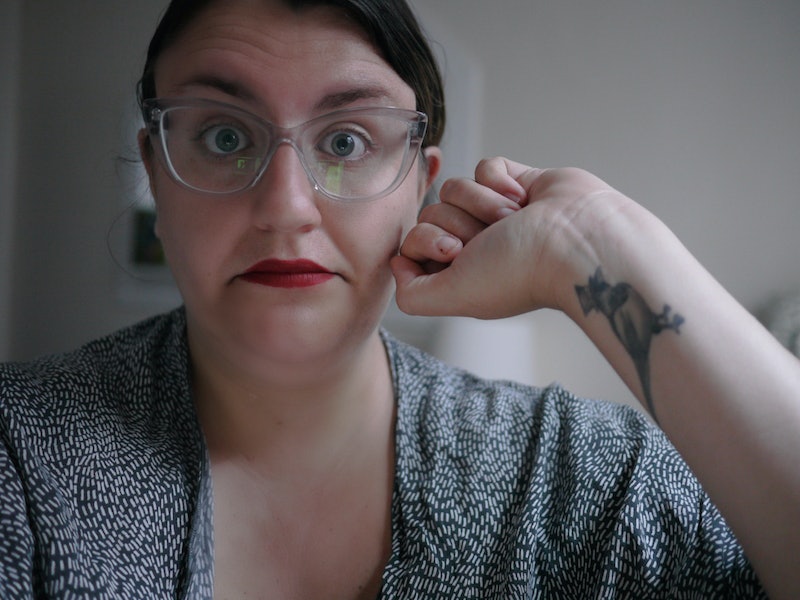 "Your future will be ruined," my father said, his massive body leaning over mine. No, I hadn't gotten arrested, or become a teen meth head; he was simply a conservative parent making a shady comment about my tattoo. I should mention that the tattoo wasn't even on my body yet. In fact, I wouldn't get one for another decade or so. His warning was about my hypothetical tattoo, one that only existed in his mind and yet was somehow responsible for my undoing.

That's the thing about having conservative parents: As much as you know their words come from a place of love, when it comes to body modification, they simply can't help themselves. To them, a tattoo (or a piercing, which I also got at a later date) represented a particularly egregious attempt to ruin my own life.

Now, don't get me wrong: I'm actually pretty happy that my parents were strict enough with me in high school to prevent me from tattooing my body at age 16. If they hadn't been, I would likely be covered in irreversible flying Weezer W's and commemorative Warped Tour emblems. In that sense, I'm actually grateful. However , when I finally did get a tattoo, despite the fact that I was 25 years old, I still received major parental shade. Here's what you can expect if you've got conservative parents like mine.

1. "That tattoo will limit your opportunities."

My father went down a long list of opportunities that I'd just be throwing away if I got a tattoo. He opened his hand and waved his fingers, over and over, to illustrate each life chance fluttering away in the breeze. Little did he know that being a regular asshole under the age of 25 will give you plenty of ways to whiff some perfectly good opportunities, no tattoo required.

2. "That tattoo makes you look trashy."

For some reason, even if your parents are as sweet as pie 99 percent of the time, the mere idea of a tattoo can make them compare you to literal garbage. Somewhere out there, a sullen teen got a tattoo of garbage just to prove them right.

3. "You know who doesn't have a tattoo? So-and-so, the girl you went to school with who is now a doctor."

Obviously, the first question on any med school application is, "Do you have a tattoo of garbage?" If you check "no," you're in. This shady comment is made worse by the fact that the girl you went to school with probably also had all the gel pens in grade school, which are basically perfect for making fake tattoos all over your skin.

This is what your conservative parents will likely say to your relatives or anyone else who asks about their precious child's new ink. It sounds benign, but it always comes with a condescending tone that lets you know you should not be fooled: What they're really saying is, "She got a tattoo because she wanted to ruin our life and hers."

Plunging even further into delusion, your conservative parent may concoct a sick revenge fantasy that involves A: Them being your boss for some reason, and B: Them firing for you for your tattoo. Ignoring this fantasy and pretending it doesn't exist is difficult, but imperative for the restoration of their mental soundness.

6. "That tattoo will look interesting with your wedding dress."

For some reason, there is no worse outfit to pair with a tattoo than a wedding dress. For conservative parents, the idea of a bride sashaying down the aisle with a tattoo is akin to the bride wearing lingerie while her skin is covered in vomit: No one wants to see it.

Perhaps the worst passive aggressive commentary is the complete and total silent treatment. It's the ultimate shade, reserved for the moments when you most disappoint them. When I showed Facebook my tattoo without telling my parents first (remember how I was 25?), I expected my mother to call me immediately. Instead, she said nothing for days, and then changed her Facebook profile picture to the illustration I used for inspiration. With no caption.

If that's not shade, then I don't know what is.