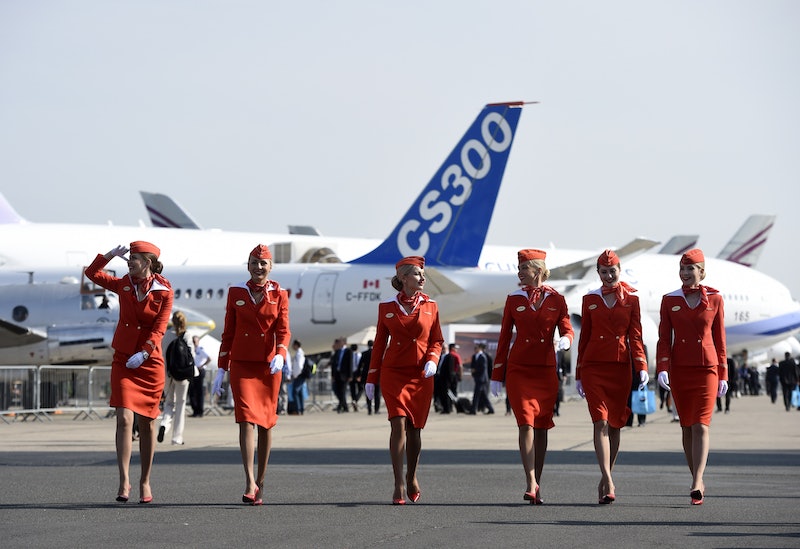 No one’s at her best while traveling, but you’d still be shocked by the amount of strange things people do on planes. Basically, any bizarre situation you can dream up has probably happened at 35,000 feet, from full-on brawls to medical emergencies. Thankfully, airlines are well aware of this, and they staff their planes with professionals to control the chaos: flight attendants.

For all that they do, flight attendants don’t get nearly enough credit. Sure, they get to witness lovely moments, like a pilot proposing to one of their own, but there are also times when passengers get unruly and they’re the unfortunate targets. Their responsibilities go light years beyond just doling out snacks, though Amanda Seyfried passed out cookies admirably when she tried her hand at the job one flight.

In Cabin Fever: The Sizzling Secrets of a Virgin Airlines Flight Attendant , Mandy Smith, a former “trolly dolly,” shares a firsthand account of the decade she spent flying the skies. From joining the Mile-High club (not while working, mind you) to discovering a sleeper terrorist onboard a Virgin plane, her adventures are wilder than fiction. In between the outrageous parties and glamorous destinations, she and her colleagues more than earn their keep, reminding us that our safety is in their hands.

Here are six ways you can make life a little easier for flight attendants when you travel, based on Smith’s stories in Cabin Fever:

Becoming a flight attendant isn’t a cakewalk. They undergo rigorous fire safety training, take first aid courses, do hours of emergency simulations, and more. Their job is to keep you safe, no matter what — whether that be helping the pilot land the plane if need be or literally putting out fires. Over the course of her career, Smith assisted a pilot who went into cardiac arrest, took care of a woman who had a miscarriage in the air, and even stitched up a five-inch stomach wound from a surgery that reopened mid-flight. Not many of us can say the same.

We all know the Golden Rule, and it applies here as well. Since we all appreciate being treated with respect, flight attendants should get that from us. Unfortunately, not everyone sees it that way. Once, as Smith was assisting a passenger, the woman turned to her daughters and said, “That’s where you’ll end up if you don’t do your homework and don’t do well at school — serving tea and coffee on a plane.” Rude.

Flight attendants have a hard enough job to do without passengers complicating matters with unrealistic and unnecessary demands. If there’s something you really need and it’s in the flight attendants’ power to get it, you should feel free to ask. Just make sure you’re polite about it and understand that you may have to wait. Pretending you're pregnant and/or dying so you can get a glass of water faster, on the other hand, is a no-no. And yes, that kind of really happens — just ask Smith.

Save Any Disputes for When You’re Off the Plane

Think of how much some people are bothered by crying babies on planes, and multiply that by a hundred. That’s my estimate for how the average person feels about having to listen to an argument mid-flight. The crew doesn’t want to put up with that nonsense, either, so when situations get out of control, they’re free to restrain passengers.

Once, while Smith was on a flight with a group traveling to Las Vegas for a wedding, an argument broke out that escalated in a brawl. All of those involved ended up in restraints, courtesy of four flight attendants. Once they landed, security escorted the troublemakers off the plane, denied them entrance to Nevada, and put them on a flight back to the U.K. I’m guessing some people got kicked out of that wedding party for that.

Stay In the Areas Where You’re Allowed to Be

Verne Troyer (aka Mini-Me from Austin Powers) once got locked in a cupboard during a Virgin Airlines flight, Smith shares. By her colleague’s estimation, it was a good twenty minutes before they heard him banging on the door and let him out. It’s unclear how he ended up there, but the moral of the story is that you should stick to areas designated for passengers. FAA regulations are in place for a reason.

Alcohol hits you harder at altitude, and when you’re drunk, you’re a lot more likely to do commit the above mentioned offenses. If a drink will help calm your nerves, by all means, have one, but stop before you become a public nuisance. Not only will the flight attendants prefer it, so will all of the people around you.