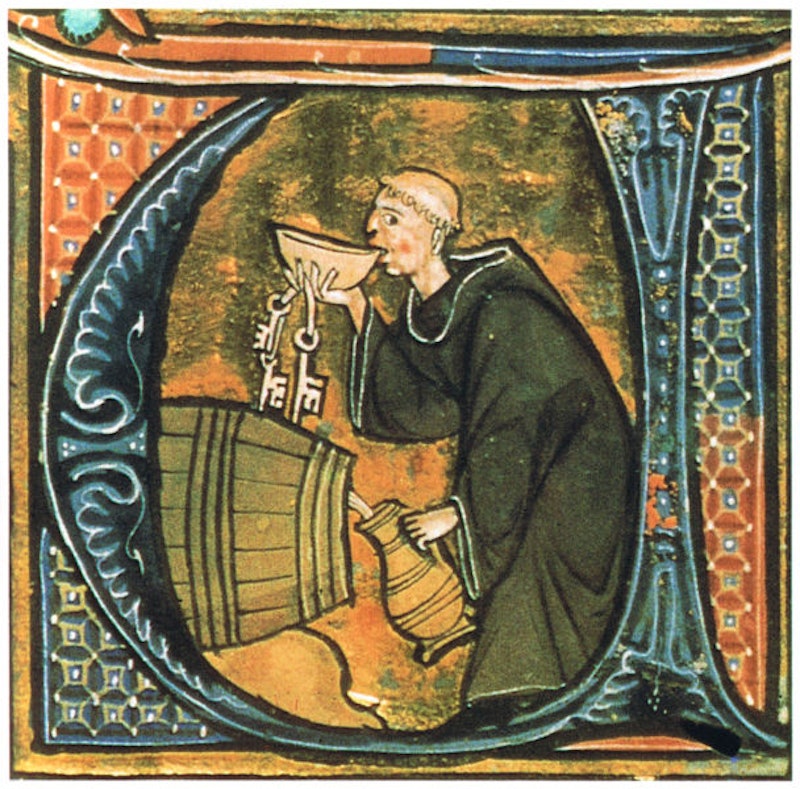 Compared to the female orgasm, the male big O seems completely non-mysterious. Sex, orgasm, ejaculation, boom, we're done, where's my sandwich. Not quite: the male orgasm has a very interesting history throughout human civilization, filled with religious intrigue, peculiar scientific theories, moral arguments and ... Kelloggs conflakes. The wham-bam-thank-you-ma'am of modern pornography, where orgasm is a one-style-only shower of fluid all over everybody, is a pretty new creation. The history of the male orgasm itself actually gets a bit, um, sticky.

Sperm, orgasm, and their role in everything from fertility to myth have had a huge role in many societies. The ancient Mesopotamian god Enki, literally the lord of semen, was seen as the source of water, plants, and other gods via his emissions, while the Indian creator god Brahma formed himself out of his own semen, and went on to create the world. But beyond creation, the male orgasm has had a lot of other roles — and it hasn't always been a smooth ride.

So in case you're feeling like your dude's orgasm routine is getting a bit stale, give this a read and put it in historical perspective. At least nobody's claiming that he's going to go insane if he masturbates?

Semen and ejaculation are actually a strong part of ancient Egyptian god myths: there's an extended episode in which Set and Horus, two male gods, have what's essentially a semen-battle. Set tries to seduce Horus, but Horus throws Set's semen in the river, and then tricks him into eating lettuce smeared with Horus's semen. When the other gods try to figure out who "won" this particular fight, they summon both bits of sperm, and Horus wins, because he got Set to "swallow". Horus's semen becomes a lovely gold disc of shame around Set's head.

In general, however, Egyptian ideas about where semen came from were a bit confused — they believed that it originated from a divinely blessed section of the vertebrae, and that impotence could be traced to back injuries.

A common theme in the history of male orgasms is the idea of ejaculation as losing "power" or vigor. The ancient Chinese liked this idea: they believed that every orgasm represented an "energy suicide," a leakage of the body's innate strength.

Taoism today continues this belief: male ejaculation is meant to be controlled as much as possible, otherwise the man is left vulnerable to disease, old age, and general bad health. However, one doctrine has an "out" — life force can be renewed by having as much sex as possible, provided that you limit your orgasms. Convenient.

The Greeks also thought that a man having an orgasm represented some kind of primal loss of power. Aristotle, the Greek philosopher, thought that too much sexual activity at a young age could stunt your growth by leaching out your energy. Plato described the penis as "an independent creature, like a living being heedless of reasoning" — like having an eel waving around under your toga.

There were also arguments about what sperm actually was. Aristotle held that it was converted from blood using male body heat; women were seen as "colder," and their own conversion process resulted in menstrual blood, which was "impure" sperm. The medical thinker Hippocrates, on the other hand, thought that both parents could produce "weak" or "strong" sperm, and that the intermingling of the two determined the character of your kid.

Medieval Europe: You Can Die Without Orgasm

Medieval conceptions of sperm and the male orgasm were a weird mixed bag of hangovers from the classical period and Christian beliefs. All sperm were not created equal: the "hotter" the man (in temperature, not in attractiveness), the more likely he was to have healthy sperm. Too hot, and he'd start spurting semen all over the place — what we now call wet dreams.

The Victorian Era: Getting Mighty Shameful

Ejaculation in sex, though, was fine — one French doctor advised that both parties needed to try to come as hard as they could, because whoever came hardest would dominate the temperament of the resulting child. Slang referred to sperm as a "pearly shower" or "flood of bliss," or even a "balsamic injection".

The First World War meant that sperm found a new outlet: as a writing tool for spies. British intelligence department MI6 (cousin to James Bond's MI5) found in 1915 that sperm was actually a pretty efficient invisible ink if an agent was severely pressed for options. One correspondent apparently needed to be reminded to keep the "ink" fresh, though, as his secret spy letters were giving off a peculiar and suspicious smell.

The post-war period meant another debut happened, too. It was the beginning of the donor sperm bank. Helena Wright, a famous and well-respected English doctor, teamed up with a man named Derek to provide sperm to hundreds of English women. The shortage of men in post-war England was acute, and those who remained couldn't always perform sexually due to injuries or shell shock. Derek stepped into the breach, and was probably responsible for upwards of 500 happy British babies.

The Swinging '60s: Masters Of Sex

The first serious scientific description of the male orgasm came along in 1966, thanks to the studies of Masters and Johnson (whose adventures are currently being played out on Masters Of Sex). They laid out exactly what happens to the male body before, during, and after orgasm, and gave us an up-close view of something that was still faintly taboo. They tracked 0.8-second sphincter contractions, muscle spasms and the fact that ejaculation wasn't always a necessary part of an orgasm.

Lately, the focus has been, overwhelmingly, on female orgasm — what it means, how we achieve it, whether the multiple orgasm is real or a myth, and how orgasm might help reproduction or guide mating behavior. It's feminist, definitely required, and seriously overdue. But have we really discovered everything there is to know about the male orgasm? Sperm itself might be the next big scientific frontier as we develop gene therapy and enter the age of genetically modified children.

More like this
Breeding Kinks Have Been On The Rise Since Roe V. Wade Got Overturned
By Lexi Inks
Are Quality Time & Gift-Receiving Love Languages Compatible?
By Lexi Inks
The 19 Best Tweets & Memes About Bisexual Awareness Week
By Lexi Inks
6 Dating App Tips To Try If You're Looking For A Serious Relationship
By Lexi Inks
Get Even More From Bustle — Sign Up For The Newsletter