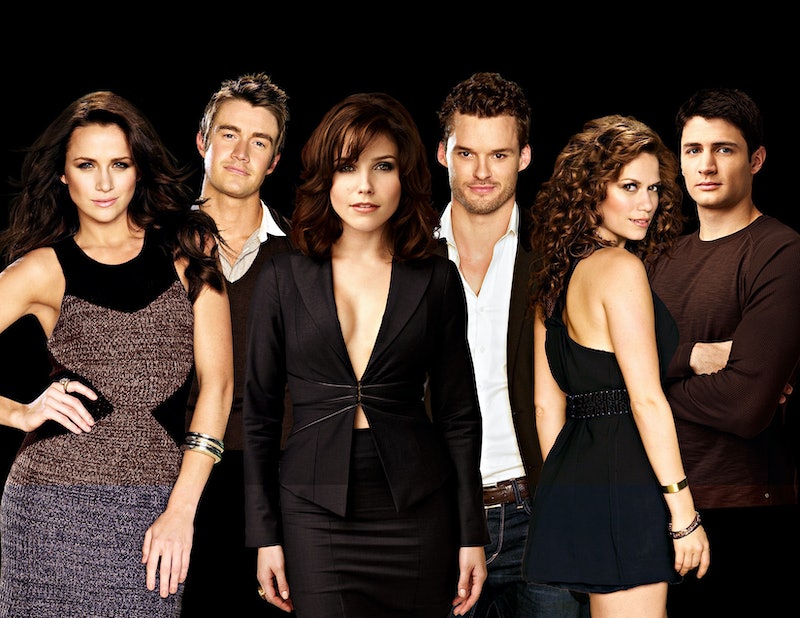 I'll admit it: I'm more attached to former CW show One Tree Hill than is socially acceptable. Two years after it ended its ninth and final season, 11 years after the show premiered on what used to be known as The WB, I remain fanatical about the teen drama series. Unlike flashy Gossip Girl or nonsensical (but gorgeous) Pretty Little Liars, One Tree Hill was what creator Mark Schwahn called a "quiet" show, teeming with extended life lessons, sweeping violin music, and characters that evolved all the way through 13 on-screen years. (And, OK, a disproportionate number of abductions.)

There were times it was tricky to be a One Tree Hill devotee. Seasons five through to seven were a mess, best exemplified by that painful scene in which Dan, the convicted murderer with a heart condition, saw a medic racing through the ER holding a heart — a heart earmarked for Dan himself — in an organ-transplant icebox. The medic trips, the heart goes flying, and a dog eats it. Obviously, Schwahn was not in top form all the time.

But if you ignore the punchy season finales and mid-season spikes of drama — the car crashes, the kidnapping, the flatlining — you got to watch a few small-town kids navigate their way through their teens and twenties. You invested in them. You rooted for them. When they made mistakes, you understood why. When good things happened, you knew they deserved them. And when I have kids, I'll park them in front of this show, and hope that they absorb the values of the One Tree Hill universe. Stuff like this...

Characters die on TV all the time. Look at Grey's Anatomy , which has killed off so many of its leading characters that working in Seattle Grace/Grey Sloan Memorial Hospital has become a precursor to a dramatic and tear-jerking death. One Tree Hill killed two characters in one fell swoop in its acclaimed "school shooting" episode in season three — but the characters didn't forget about it two weeks later, or even two years later.

In the episode, after years of brotherly animosity, Dan Scott shot and killed his brother in their sons' school hallway. Nobody saw. Dan remained a leading character for the remaining six seasons, but after he admitted his role in Keith's death, no other character ever forgave him.

Keith's death, along with the death of the gunman, Jimmy, reverberated throughout the rest of the series: A decade on, characters still talked and talked about it. The last episode, six seasons later, ends with a memorial scholarship dedicated to both Jimmy and Keith.

But nobody talked about it with Dan, because nobody ever spoke to that guy again. Which is basically a long, dramatic way of saying...

2. You Can't Backpedal On Your Decisions

OK, yes, Dan's murder of his brother is an extreme example, but bear with me. Over and over again, Dan begged for forgiveness, tried to rationalize his actions, tried and failed to commit suicide, tried and failed to make amends, sobbed that he wished he could take it back... It was exhausting for everyone, actually.

Over six whole years — and, in the One Tree Hill universe, 10 — the series hit home the point that Dan couldn't take his decision back. Which brings me to...

3. What You Do Matters

"What you do matters," was one of the series' defining quotes. But it's time to look at another example.

In season four, then-high school senior Haley discovers that she's pregnant, because she wasn't responsible enough about birth control. (Life lesson No. 102012, kids.) She winds up having a kid, Jamie, who turns out adorable (and staggeringly wise) because Haley takes full responsibility for her decision to have a baby as a high-school senior.

Although, of course, Jamie's always talking about his grandpa Dan Scott, who — you guessed it — is still in the doghouse.

Then there's the whole Naley saga. Nathan Scott marries Haley when they're both 17, and the duo faces a ton of problems — their unplanned, teenage pregnancy; both of them going AWOL to follow their dream jobs; cheating — because they married way before they should have. Still, Naley work hard at keeping things together, because they made a vow, and they're hell-bent on keeping it. Because...

You can't backpedal on your decisions in real life. (Life lesson siren, incoming.)

When Lucas doesn't take medication for his heart condition, he has a full-on heart attack in the street. When Millicent drives drunk, she gets arrested.

Even little Jamie takes his responsibility as a pet owner seriously.

Whenever anybody in the One Tree Hill universe cheats on their partner, for example, all of the other characters find out. It's like there's been a Gossip Girl blast, only an ethical one.

Anyway, the point stands: You can't get away with your mistakes; you have to admit to them. After you do, it's the other person's responsibility to try to forgive you. Because...

5. Forgiveness Is Both Possible And Necessary

Forgiveness is a big thing in the OTH universe.

Even Dan is forgiven by the ghost of his brother on his deathbed. They then go to heaven together, which is a weird scene and doesn't entirely make sense, but there's a life lesson in there somewhere.

It wouldn't be a teen drama without, well, melodrama. Times get hard. Brooke's parents abandon her. Haley's parents die. Lucas discovers he has a heart condition. Millicent gets addicted to cocaine. Nathan has to give up his MBA career when his legs are paralyzed. Brooke discovers she's infertile. Peyton finds her birth mother, who promptly dies. Mouth is rejected by all females ever.

There's one doctor character in One Tree Hill, and he has to pull pretty much everybody off their deathbed. By my count, every major character on the roster, bar Brooke, flatlines on a hospital operating table at some point. (It's like deus ex machina with a blood-pressure monitor and pounding music.)

Some characters never pull themselves out of their dark holes: Haley's sister Taylor, for example, is angry for eight seasons straight. Without some degree of strength and perseverance, the characters of the One Tree Hill universe don't see magical happy endings. Peyton is perpetually sad and angry; Nathan can't forgive his dad; Haley lapses into a deep and lengthly depression after her mother dies. But if they work hard, the pieces begin to fall together.

OK, sometimes they fall together a little too perfectly. For example, in season five, Nathan is told by doctors that he'll never walk again. After a lot of physio, he's back in the NBA. The freakin' NBA.

That was a bad day for logic, Mark Schwahn.

7. But If You Work Hard, Things Work Out

In the One Tree Hill universe, hard work usually reaps rewards. After his heart condition makes it impossible for Lucas to pursue the NBA, he pours his heart into a book, which becomes a bestseller. Mouth is fired from his sports-presenting job after he refuses to report a false story, but sticks with his dream and ultimately gets his own TV show.

Brooke channels her break-up energy into her clothing label and winds up the head of her own million-dollar corporation. Haley doesn't want to move out of Tree Hill, so she starts her own recording label and sends a bunch of struggling artists to stardom.

Every time he came back from the dead, Keith Scott was so wise.

I'm not going to go so far as to call One Tree Hill a revolutionary force in feminism. But let's be clear: The women — Peyton, Brooke, Haley, Quinn, Millicent — were the real stars of this show. They struggled with loneliness, loss, and disappointment, but they never gave up on their dreams.

When life beat them up, they fought the hell back. Take season four, when Peyton's stalker posed as her long-lost brother (yes, it was weird, but it kinda worked) and kidnapped Peyton and Brooke.

They beat the creepy stalker guy to a pulp. And afterward, when they were terrified to leave the house, they moved in with one another, double-locked their doors, and took self-defense classes.

They're not afraid to speak their minds. Or to eat.

And they carve out their own life paths, with men or without them. Peyton moves away from her boyfriend, Lucas, to pursue her record-label dreams — twice. She and Brooke fight over Lucas for a while but get over it and move on. Because, you know, boys aren't worth it.

By 21, Haley is already juggling her singing career, motherhood, and marriage.

And the female characters' friendships make the damn show.

So, three cheers for One Tree Hill. What it lacked in logic, it made up for in life values.