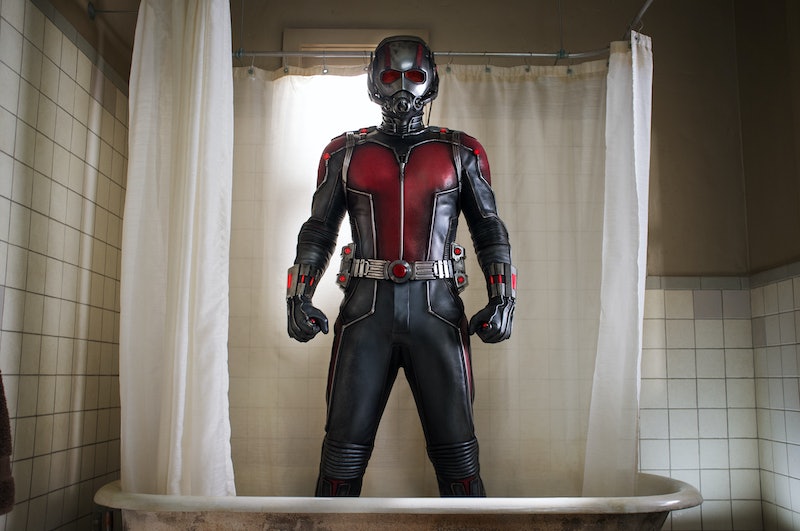 It's no secret that Marvel loves to have audiences hunt for easter eggs throughout all of the studio's movies. Some are big and obvious (any and all Stan Lee cameos), while others are obscure and targeted towards hardcore fanboys and fangirls (remember when there was that milli-second glimpse of the Infinity Gauntlet in Thor: The Dark World?). Just like the movies before it, this month's Ant-Man has its fair share of easter eggs that reference past Marvel releases. Of course, director Peyton Reed and the Ant-Man writers don't make it easy for you to find those shout-outs. They want you to work for them, because what's the fun in just serving you those hidden morsels of Marvel goodness on a silver platter? That's why I'm here, though — here's where to find these Ant-Man easter eggs.

Sure, there are the unexpected cameos, but the it's the smaller, more detailed Marvel references that'll get fans the most excited. Many of these easter eggs are references to past studio movies, but others hint at its future projects. In the case of Ant-Man, Marvel president Kevin Feige has made it very clear that the movie plays a huge role in ushering us into Phase Three.

So when you watch Ant-Man, keep your eyes peeled for these 10 easter eggs. Some of them are in plain sight, while others are as small as the titular hero. If you blink, you just might miss them... and there are spoilers following this sentence, obviously.

I'll start off with the obvious ones. The MCU has become so big that cameo crossovers in other Marvel movies (and TV shows) is inevitable. In the beginning of Ant-Man, viewers immediately see Peggy Carter (Hayley Atwell) and Iron Man's dad, Howard Stark (John Slattery). Later, Ant-Man gets into a little squabble with Falcon (Anthony Mackie) at the Avengers headquarters, and of course, viewers are treated with a trademark Stan Lee cameo. Finally, in the post-credits sequence, Falcon arrives again, but with Captain America (Chris Evans), and the two are holding the Winter Soldier (Sebastian Stan) captive. This final sequence of cameos lets us know that Ant-Man will come back in Captain America: Civil War.

In another attempt to get us pumped for the superhero-packed Civil War, Feige told Fandango to pay attention to one particular part of the movie when Ant-Man is infiltrating the Avengers base. He says, "If you were to freeze the frame when Ant-Man is flying over the Avengers facility, there are new landmarks and buildings in that frame that you won’t see until Captain America: Civil War." May 6, 2016 can't come fast enough.

It's all about the small details. When there's a scene in Pym's Victorian house in San Francisco, make sure you pay close attention. Director Reed told Collider, "You might notice certain details that sort of talk abut his history and his experimentation with the Pym particle. There might some miniaturized objects all around the room."

At one point in the movie, Hank Pym's assistant-turned-rival Darren Cross (Corey Stoll) jokingly cites the original Ant-Man as a "tale to astonish!" That line just happens to be the title of the first comic that the character Hank Pym appeared in 1962.

When Ant-Man first started filming in 2014, there was a picture of Paul Rudd walking the streets of San Francisco with faded posters of Pingo Doce soda in the background. This was the same soda that gave "Gamma sickness" to an innocent victim (who happened to be played by Stan Lee) in The Incredible Hulk.

Another detail Reed says to pay attention to is all the newspapers. "There’s a main thing when I do an insert of a newspaper that you want to look at for a story," he told Collider. "There also might be some other things in the margins of that newspaper that are interesting." Hints at other Marvel storylines, perhaps?

This one is for the hardcore comic fans. In one of the San Francisco scenes, we see a place called the Milgrom Hotel, which is most likely a nod to Marvel comic book writer and artist Al Milgrom. He was known mostly for his work on the West Coast Avengers in the '80s — particularly on the character of Hank Pym.

Feige has gone on record saying that as an diehard Star Wars fan, he pays homage to the film by having someone's arm getting cut off in each Phase Two Marvel movie — just like Luke Skywalker's hand gets cut off. Ant-Man isn't any different.

Ant-Man marks the first MCU movie that mentions Spider-Man. They don't flat out say "Spider-Man" but the mention comes in the form of a "web-slinging" and "wall-crawling" joke. Obviously this is another rung on the ladder leading to Captain America: Civil War, where Spidey will make his first appearance in the MCU after being held by Sony for the past decade or so.

10. Hidden Secrets Of The Quantum Realm

Finally, Reed says we really need to pay attention when Scott goes subatomic and enters what is known as "The Quantum Realm." It's a trippy sequence and the easter egg is so obscure that our tiny hero doesn't even see it. Reed says "if you’re sharp, if you’re a keen, sharp audience member you might see something or someone in that environment."

Ant-Man is jam-packed with big and small easter eggs to keep us hungry for more Marvel action coming in Phase Three — so many that it may require multiple viewings.