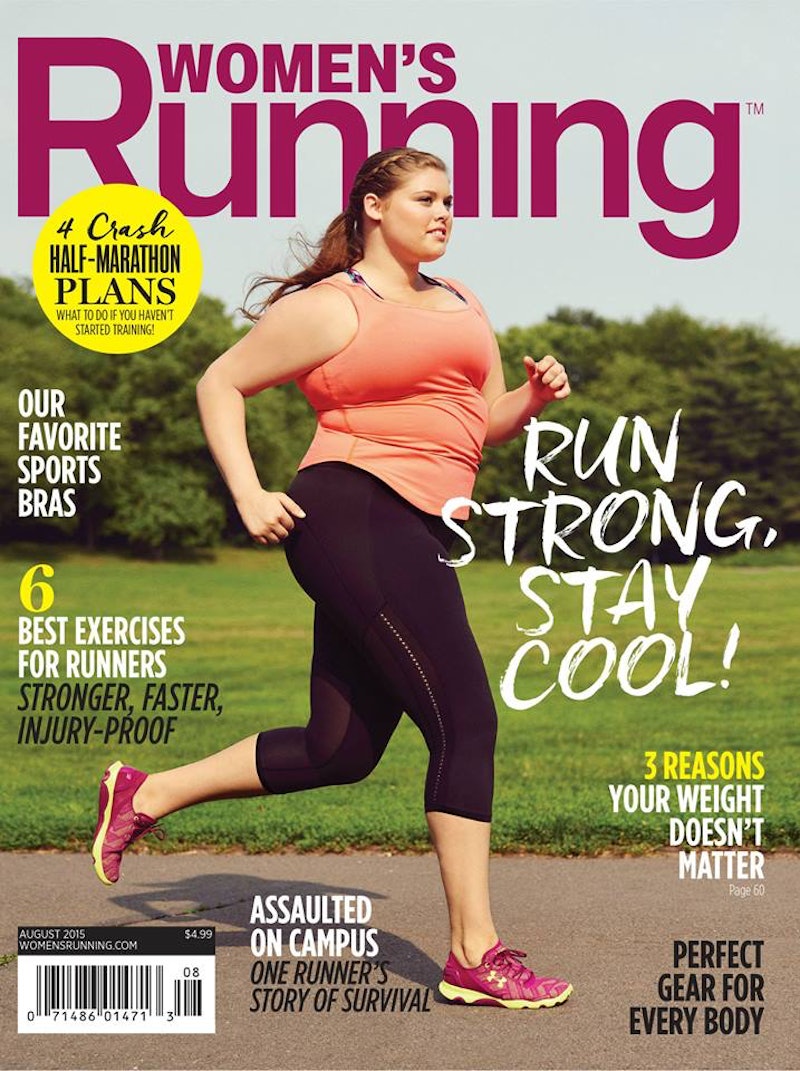 Today in "Well, What Took So Long?!" news, Women's Running stars a plus size cover model. She might not look like any of the women featured on the cover of the magazine in months past, but Erica Schenk (a Wilhelmina model) definitely fits the criteria: she's a runner. The magazine's August issue featuring Schenk comes out next week, but people are already freaking out with excitement over this progressive and long overdue move.

Magazine editor Jessica Sebor told Today.com that it just made sense for Schenk to cover the issue since they were already shooting her for a story about the expanding size ranges of activewear companies. It wasn't just a convenient move, though. It was done with the intent to more accurately represent their readership and celebrate the diversity of all types of bodies that run. "I think that every woman goes to the magazine rack sometimes and feels like she can't see herself in the cover images," she told Today. "We wanted our readers to feel like they could see themselves in our cover."

Both Sabor and Schenk wanted to disrupt the notion that there's a singular "runner's body" and that anyone can take up the activity. Schenk told Women's Running that, "Some women believe that since they have curves they can’t run or shouldn’t run. Running is for every body anytime."

Sebor echoed that statement to Today, saying, "There's a stereotype that all runners are skinny, and that's just not the case. Runners come in all shapes and sizes. You can go to any race finish line, from a 5K to a marathon, and see that. It was important for us to celebrate that."

Of course, there's part of my heart that breaks to see how relieved, how happy, and how ready people were to see this cover, not to mention the praise that's being heaped upon the magazine for simply offering a single alternative image of what a runner can look like. I mean, even Schenk can't represent all plus size women runners! She shouldn't have to. There should be multiple images and representations available and I hope that becomes a reality.

As someone who is newly finding joy and power in moving my body and exercising again, it's been disheartening to see the state of fitness magazines and realizing they are very much not designed with me in mind. Fat shaming language, straight size workout clothes, and weight loss tips abound. The cover models are almost always tiny, daintily toned, white, and able-bodied. The only time I'm used to seeing a woman whose body looks like mine is in the "before" pictures of some gigantic weight loss story.

I hope that Women's Running and all other fitness magazines out there see the positive response to this as a call to incorporate more inclusive content and imagery. And then, to borrow a phrase they (and Shia LaBeouf) like to throw around, Just Do It.