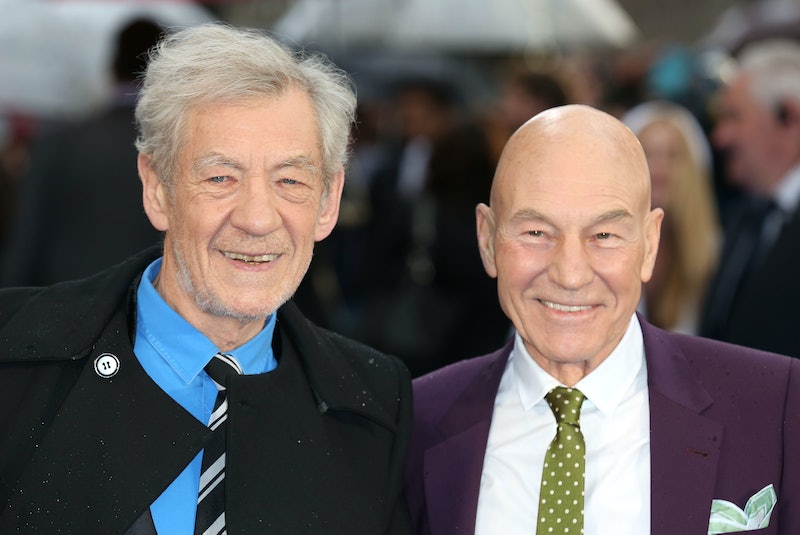 What do Ed Sheeran, Gigi Hadid, Lena Dunham, Lorde, and Cara Delevingne all have in common? They're part of Taylor Swift's ultimate squad, duh. It's no secret that in addition to being one super successful singer, T. Swift is also known for having tons of friends and walking around with her posse. And now it looks like the 25-year-old megastar just found two new (albeit unlikely) members to join her crew: Patrick Stewart and Ian McKellen. That's right, these two real-life besties want to officially be a part of Swift's inner circle — and by the sound of things, she seems to be more than game.

On Thursday, Stewart tweeted Swift the following: "So @IanMcKellen recited Bad Blood and I did Blank Space on @NPRAskMeAnother. May we join the squad, @taylorswift13?" In case you missed it, Stewart recited Swift's song "Blank Space" during an NPR interview this week, while his BFF, McKellen, recited "Bad Blood" for Yahoo!. Obviously, this qualifies them as T. Swift squad members — and seriously, how fantastic is that? If I'd want anyone in my squad (though just to be clear, I don't have one... yet), it'd definitely be these two X-Men stars. Not only are they super talented, they're also hilarious. I have no doubt McKellen and Stewart would make amazing friends.

Of course, Swift responded giddily to Stewart on Twitter Thursday, posting, "Thanks for reciting my lyrics, @IanMcKellen and @SirPatStew! You've made my day. You two are ULTIMATE Squad Goals."

So how exactly do Stewart and McKellen feel about becoming the latest members? McKellen has yet to respond, but Stewart is totally freaking out. On Friday, he shared these hilarious tweets:

Ultimate. Squad. Members. For. Sure.