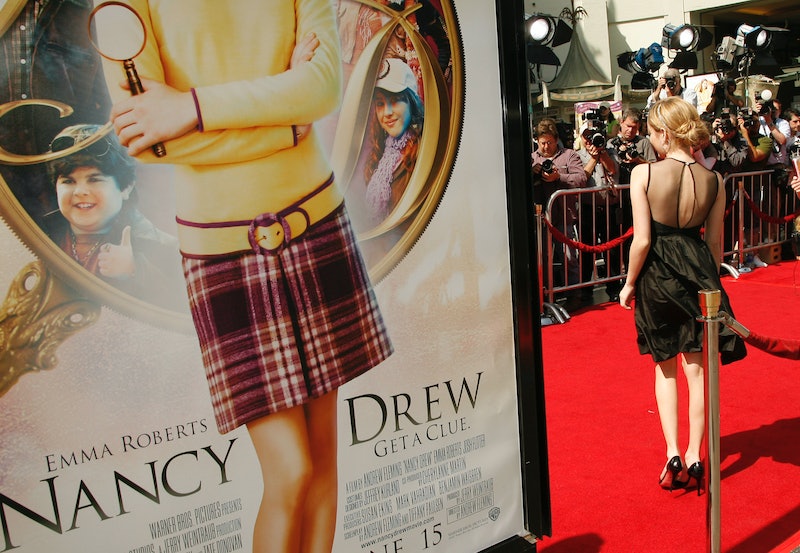 If you were born anytime between the 1920s and today, chances are you at one point had that perfect streak of yellow hardcovers lining a shelf in your bookcase. Teenage sleuth Nancy Drew has been an icon since her release in 1930 with The Secret of the Old Clock, but until more recently, the original Nancy Drew ghostwriter Mildred Wirt Benson has not gotten the admiration she deserves. On the 85th anniversary of one of our favorite young adult characters of all time — one whose name has become synonymous with a smart detective — the late Benson, who last week would have turned 110, is getting the recognition she has been owed since she was the first one to take up the pseudonym Carolyn Keene.

Back in the 1930s, publishing was run by syndicates that would hire ghostwriters to create a series under one pen name. In fact, no one outside of the Stratemeyer Syndicate even tied Benson to Nancy Drew until she testified in a 1980 trial. Since 1994, publishers have officially noted Benson as the author of Nancy Drew books 1-7, 11-25, and 30.

Benson, according to Slate, would not have called herself a feminist, but it's not hard to see that she was one. She was an intrepid journalist herself, and she lived an adventurous life as a world traveler and aviator. You can thank Benson for the original Nancy Drew, the tough, determined, and whip smart detective readers have fallen in love with for decades. Girl Sleuth: Nancy Drew and the Women Who Created Her author Melanie Rehak told Slate in an email that the Stratemeyer Syndicate, which originated and published the books, chose Benson specifically for this reason:

[Benson] gave Nancy many of the qualities we remember so fondly and fiercely, like her determination, her intelligence, her self-reliance and her athleticism. Stratemeyer hired Mildred because he wanted someone who could infuse Nancy with these things, and he could tell Mildred was a go-getter from the moment she answered his ad.

And it wasn't just youthful energy that propelled Benson's adventures; she traveled extensively across Central America and the Yucatan Peninsula when she was in her 50s and 60s, according to Slate. She drove a Jeep through the jungle and swam and paddled a canoe down the river. She oversaw archaeological sites and visited the Mayan ruins. Famously, Benson witnessed Halley’s Comet twice in her lifetime, in 1910 and in 1986.

Which was probably why Benson was annoyed when Edward Stratemeyer's daughters took over the series to make Nancy Drew far more wholesome. Benson told Salon:

[Harriet] made her into a traditional sort of a heroine. More of a house type. And in her day, that is what I had specifically gotten away from. She was ahead of her time. She was not typical. She was what the girls were ready for and were aspiring for, but had not achieved.

As Benson wrote in the Toledo Blade, where she once worked, she had been tied not only to the pen name Carolyn Keene, but under the names Frances Judd for the Kay Tracey series, Helen Thorndyke for the Honey Bunch series, Joan Clark, Ann Wirt, and even Frank Bell when a publisher told her that "boys did not like to read books they knew were written by women."

However, though she's most famous for Nancy Drew, Benson has said that she prefers her edgy, adventurous heroine Penny Parker, who, like Benson herself, was a reporter with a thirst for life.