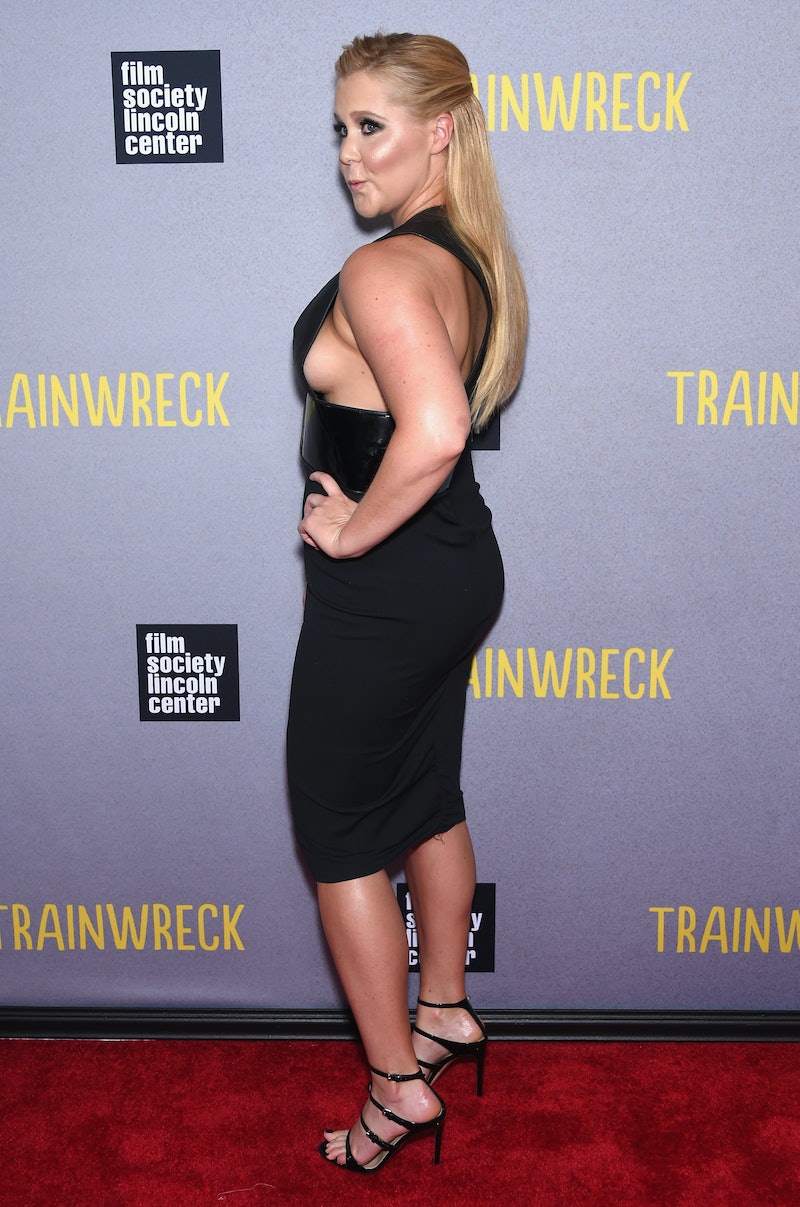 Amy Schumer is the gift that just keeps on giving. From her hilarious standup routines to her brilliant feminist sketches on Inside Amy Schumer, she's at the top of the comedy game right now. (Plus, let's not forget that Emmy nod!) It also doesn't hurt that her much-anticipated raunchy rom-com movie Trainwreck just opened in theaters everywhere, bringing her onto the big screen and propelling her into the spotlight in an even bigger way. Considering the fact that the movie — which she wrote and stars in — is all about sex and relationships, some fans might be wondering who Amy Schumer's real-life boyfriends have been. Turns out, the actress and comedienne has dated a bunch of different (and super lucky) guys over the years, but she's only really spilled the beans on a few of them.

For someone who's pretty much an open book when it comes to her thoughts on sex, love, and everything in between, Schumer is often tight-lipped when it comes to actually name-dropping the people she's been involved with. Of course, there is one notable exception: Back in 2012, Schumer went on the Howard Stern show and got real specific about her dating history. She may have only dropped a couple of names from her Little Black Book, but it was certainly enough to see that Schumer, much like her many alter egos, has quite a variety of taste when it comes to men.

The first name Schumer revealed to Howard was Anthony Jeselnik, a fellow comedian she once dated who later roasted Roseanne Barr alongside her. Two comedians sure seems like it would be a good pairing to me — after all, they could certainly keep each other laughing — but that wasn't enough, Schumer explained. In the end, she called it quits for one simple reason: "He was not attentive enough," Schumer told Stern.

The comedienne also admitted to once dating Dolph Ziggler, a wrestling star on WWE. "The sex was too athletic. Always," she said. "[But] the first time, I was like, 'Oh, this is cool. Nobody's ever ragdolled me.' He was spinning me like a Globetrotter." Ultimately, she said she broke it off because the sex was just too much for her, and even admitted that she dumped him over text. (Ouch!) It wasn't until later that she said she found out he had a "tender heart" and likely took it harder than she thought. Tough break, man.

Though Jeselnik and Ziggler were the only two names Schumer's dropped from her dating life, she has admitted that Trainwreck was actually inspired by her own love life. "I was falling in love when I wrote Trainwreck, was scared out of my mind and wasn't even enjoying it," Schumer told Indiewire. "I was feeling sick all the time. It's like being on drugs."

Unfortunately (or fortunately?), the relationship that sent Schumer into a spiral of lovesickness was over by the second table reading. How come? According to the comedian, he turned out to be a total sex addict. (Yikes. I guess that's why she didn't drop his name this time?) For now, Schumer reportedly remains single, but I'm thinking that's probably not going to last for too long — after all, there's no denying this is totally her year.