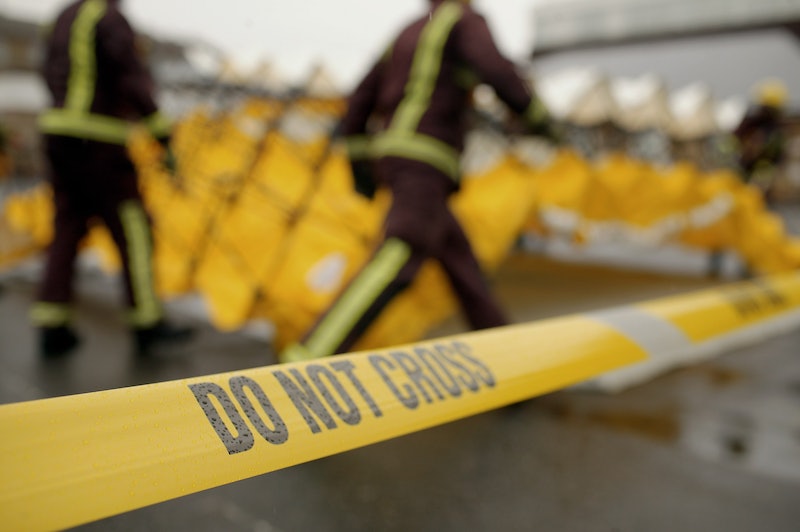 On Friday, a manhunt concluded for a gunman who reportedly shot four different people in the Northern Maine towns of Benedicta, Lee, and Silver Ridge on Thursday evening. The condition of all four victims is currently unclear and their names have yet to be released. Maine State Police initially concentrated their efforts to the Lee area when searching for the gunman, though the suspect was arrested in nearby Houlton. So, who is Anthony Lord, the alleged Maine shooter?

The 35-year-old is from both Crystal and Houlto — two nearby towns in Aroostook County, just an hour away from Lee, according to the Portland Press Herald. Lord has a prior criminal record that begins in 1999, starting with a threatening conviction. He received both an assault and a trespassing conviction in 2002, as well as a separate sexual assault charge and an unlawful sexual conduct charge that year, of which he was also convicted. Furthermore, Lord violated his probation in 2003, according to the Bangor Daily News.

He has a lifelong designation as a sex offender after being convicted in 2004 of three unlawful sexual contact crimes related to a person under the age of 14 in the aforementioned county. Lord was sentenced to five years in prison and four years of probation in 2005 for those charges, along with paying nearly $7,000 in restitution. Additionally, Lord was convicted of illegally bringing tobacco into prison in 2006 and was convicted of driving under the influence in 2008. His most recent charges stem from a domestic violence assault in January of this year which he was convicted of in Millinocket, a town that is in Penobscot County — the same county as Lee.

A separate investigation is currently underway in regards to the death of Lord's six-month-old son, Larry Earl Lord, who died mysteriously and suddenly in May. Maine police maintain that the investigation is a fairly standard process that occurs after any infant's untimely death. Additional developments regarding that case, as well as a full autopsy report, are pending.

Lord was with an unidentified woman when he was taken into custody on Friday. Authorities have said that the woman is not the same person as the victim of the aforementioned domestic violence assault. That woman has been found safe and the woman Lord was with is also in no danger, according to law enforcement. It is unclear what Lord's motives were when he allegedly shot four people in the Penobscot County area. Likewise, his potential charges have yet to be released.

More like this
Chloe Pirrie Is Ready To Take The Next Step
By Sam Ramsden
'The Capture' Is Finally Back – & S2 Looks Tense AF
By Sophie McEvoy and El Hunt
The Lionesses Are Calling For Equal Access To Football In Schools
By Sophie McEvoy
Dr. Anna Pou Is Still Practicing Medicine After Facing Murder Charges
By Brad Witter
Get Even More From Bustle — Sign Up For The Newsletter