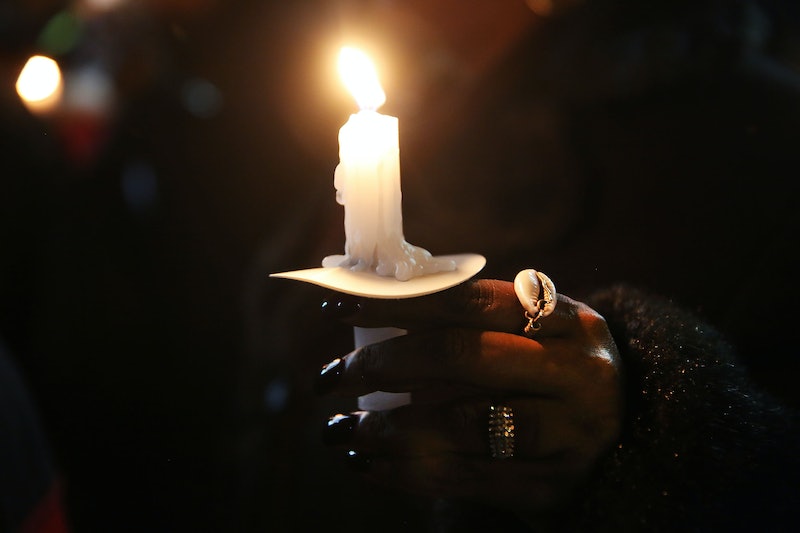 Friday marks the one-year anniversary of the day Eric Garner died after a police officer put him in a chokehold in Staten Island, New York. Garner's death was one of many incidents of racially charged police actions over the last year that contributed to the acceleration of the #BlackLivesMatter movement into the international spotlight. But even though people around the world are now confronting police brutality, it remains prevalent, and the recent cases of Sandra Bland and Kindra Chapman — two black women who were found dead in their jail cells after allegedly committing suicide, according to authorities — demonstrate how much work is left to be done.

As we honor Garner, Michael Brown, Tamir Rice, Tanisha Anderson, Rekia Boyd, and others, there are many ways to get involved, whether that involves participating in marches and protests, calling politicians and police departments, or donating money to local and national organizations that combat structural racism, police brutality, and mass incarceration. Donating money is definitely just one option, and it is a privilege to be able to do so. However, if you are able to, there are some great organizations out there doing important, challenging work, and this is just a short list.

1. The Center For Constitutional Rights

According to its website, the CCR is "dedicated to advancing and protecting the rights guaranteed by the United States Constitution and the Universal Declaration of Human Rights." It addresses a range of important social and political issues, including drone killings, immigration, government surveillance, discriminatory policing, and racial injustice. The CCR works in and beyond courtrooms to redefine victory in human rights cases and develop creative legal strategies to assist marginalized communities. The CCR is currently engaged in a landmark case challenging the NYPD and other local law enforcement institutions regarding discriminatory practices against marginalized folks. You can donate to the CCR to help them fight for these causes.

2. The Organization For Black Struggle

The mission of the OBS, a grassroots organization in St. Louis, is "to build a movement that fights for political empowerment, economic justice and the cultural dignity of the African-American community, especially the Black working class." Some of the specific goals on their "freedom agenda" include fighting police brutality, unwarranted incarceration, the death penalty, state terrorism, and worker exploitation to ensure liberation and solidarity. OBS is local to St. Louis, not New York, but is a great place to donate if you're looking to support a grassroots non-profit that has been working since 1980 to "fill a vacuum left by the assaults on the Black Power Movement."

Although Hands Up United maintains a local focus on Ferguson, using the hashtag #JusticeForMikeBrown, it also focuses on police brutality as a national issue. Its vision is an end to "state sponsored violence, including the excessive use of force by law enforcement" and to "mass incarceration and the criminalization of black and brown people." Hands Up United is an intersectional organization that acknowledges the links between anti-racist struggles in Ferguson, Palestine, Ayotzinapa, and around the world. A donation to Hands Up United goes directly to organizers in the Ferguson and St. Louis area that are leading the movement against police brutality.

Based in New York, CPR works to end "stop and frisk" policing tactics that disproportionately impact marginalized communities and challenges "broken windows" policing. CPR aims to hold the New York Police Department accountable by encouraging policing based on mutual trust, getting rid of quota targets, and educating people on their rights. If you donate to CPR, your donation will "go towards building the capacity of New Yorkers most affected by abusive and discriminatory policing."

Audre Lorde was an internationally recognized “black feminist, lesbian, poet, mother, [and] warrior" from New York who fought for liberation of oppressed peoples and organized across lines of difference. The Audre Lorde Project is an LGBTQ+ People of Color center for community organizing based in the New York City area, and it works for "community wellness and progressive social and economic justice" through a combination of "mobilization, education, and capacity-building." The ALP grew out of a need to address issues facing LGBTQ+ communities of color in an intersectional way, and police brutality is one of many issues it aims to combat. Donations to ALP can go toward building resistance to police violence, community organizing and leadership, movement-building, and wellness spaces.

For a more complete list of organizations and charities working to combat police brutality and racial injustice, you can consult Funders for Justice.