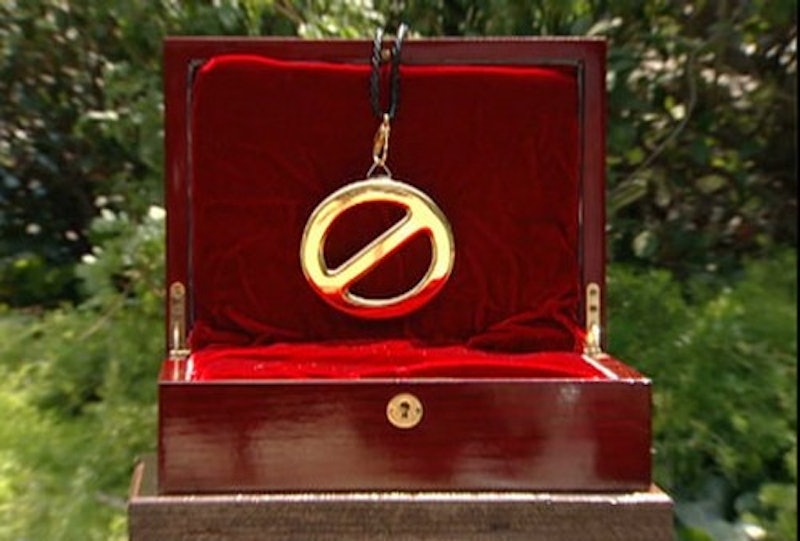 First of all, a little background for those who don't know the show at all — the plain old regular Power of Veto with no colors or add-ons attached is a prize that you can compete for once a week in the Big Brother house that, once won, allows you to veto someone's nomination for eviction, saving them from having to submit to a house guest vote that will send them or their partner on the block home.

And then here's where the differences start coming in, when colors are assigned to the medallion. The most basic one is the Silver Power of Veto, which was introduced in Big Brother 3. Back then, every house guest was able to compete for it, instead of the group of six it's limited to now (Head of Household, the two nominees, and three randomly-drawn names), but the difference was that, if a nominee won it, they were not able to save themselves from the block.

At the end of Big Brother 3, the Golden Power of Veto was introduced, which is what we use now, across the board. (See, so the terms kind of are interchangeable!) It's the same as the Silver Power of Veto, except that it allows a nominee to use the PoV on themselves, to pull him or herself off the block. It can also be used by a non-nominee to rescue a nominee, and stay safe themselves, meaning that the Head of Household cannot choose the rescuee to fill the place of the rescued on the block.

Then there's even another level of veto — the Diamond Power of Veto. This was first introduced 13 seasons ago, in Big Brother 4, and made a reappearance in Big Brother 12. It came out of a game element called Pandora's Box, and granted the user the same powers as the Golden version, except that, if the bearer rescued someone from the block, they were allowed to select the replacement nominee themselves instead of that choice deferring to the Head of Household as it would with a traditional Veto. The only people who are off-limits in that case are the reigning HoH or the holder of a regular Golden Veto in that particular eviction.

There's also what's called a Dual Power of Veto, which allows you to pull both house guests down off the block, an opportunity that was presented in Week One of Big Brother 13, but not taken. The only tricky thing about this one is that you have to rescue either neither or both house guests; you can't pull just one with the Dual Veto.

So there you have it! Every different kind of Veto your heart could ever desire. And, since it's been a while since we've seen a different variation on one, maybe Season 17 is our year. Do I smell a Ruby Power of Veto? Fingers crossed.

And hey, Bustle’s app has you covered, too. It’s THE go-to place for any BB fan looking for round-the-clock Season 17 updates. BUT FIRST, you need to download the app from iTunes.