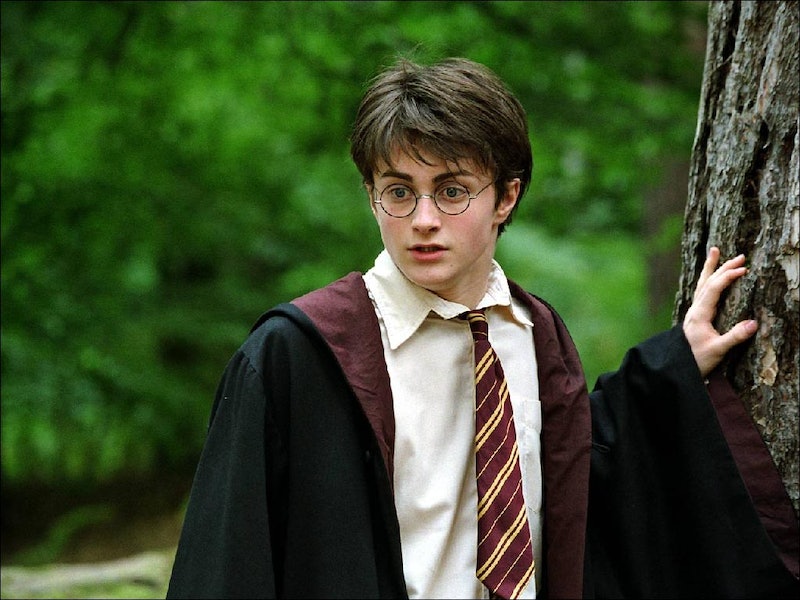 I should probably preface everything that I'm about to say with this: I am, and always have been, a huge Harry Potter fan. If I were sent to a deserted island somewhere and could only take one book series with me, I would take the Harry Potter series. I have dressed up for the movies, gone to the midnight book releases, and even traveled around England and Ireland visiting famous HP locations. I'm an absolute Harry Potter fangirl, and wear that title with pride.

That being said, we all agree that Harry lacks some essential common sense sometimes, right?

I know that the kid has the best of intentions, but unfortunately, Harry doesn't always seem to think things through. Whether he's flying a car onto Hogwarts grounds, or trying to stage a rescue mission at the Ministry of Magic, he just seems to make one terrible decision after another. His heart's in the right place, but the sad truth of the matter is that, although he might be brave, Harry just isn't that bright. There's a reason the Sorting Hat didn't try to put him in Ravenclaw.

Harry's birthday is on July 31, so I thought that it would be a fitting tribute to take a look at some of the dumbest things he's done over the course of seven books. It's like a, This is your life, Harry Potter! except we're only going to celebrate his wizard fails.

Harry Potter and the Sorcerer's Stone

Harry tries to get rid of a baby dragon...and forgets his Invisibility Cloak

As they stepped into the corridor, Filch's face loomed suddenly out of the darkness. "Well, well, well," he whispered, "we are in trouble." They'd left the invisibility cloak on top of the tower.

I'll go easy on Harry on this one, because he just escaped an abusive home and is trying to adjust to the idea that he has magical powers and is a hero who took down the darkest wizard of all time who also murdered his parents. Eleven is a tough age. So I'm going to say that his dumbest moment in this book isn't attempting to save the Sorcerer's Stone with only the help of two other unqualified underage wizards (this will become a pattern in the series), but rather when he gets caught wandering the halls at night because he left his Invisibility Cloak behind. You manage to sneak a baby dragon to the top of the Astronomy Tour and get it to safety, but you forget to put the Invisibility Cloak back on? This isn't amateur hour, Harry.

WTF Harry Scale: One Norbert out of five, because this is probably one of the least stupid things he does this whole series.

Harry Potter and the Chamber of Secrets

Harry and Ron steal a flying car...instead of patiently waiting for someone to help them

"I think we'd better go and wait by the car," said Harry."We're attracting too much atten-""Harry!" said Ron, his eyes gleaming. "The car!""What about it?" "We can fly the car to Hogwarts!'

In this scene, Harry and Ron find themselves barred from running through the barrier on Platform 9 3/4, making them miss the Hogwarts Express. However, will our young heroes make it to school? They have three options: Use Hedwig to deliver a message to Hogwarts notifying them of this issue and wait to be given a safe and convenient alternate way to school; wait for Ron's parents, who will surely have to exit the platform and return to their car, and ask them for help; or steal a flying car that they've never personally flown before and try to find a school hundreds of miles away in a secret location. Any guesses which one they pick? Boys, you deserved to be attacked by the Whomping Willow after that one.

WTF Harry Scale: Two and a half Howlers out of five, since they were idiots but no one really got hurt.

Harry Potter and the Prisoner of Azkaban

Your parents gave their lives to keep you alive, Harry. A poor way to repay them — gambling their sacrifice for a bag of magic tricks.

Harry does a number of dumb things in this book, obviously, but the number one bad decision definitely has to be when Harry sneaks into Hogsmead using his Invisibility Cloak and is caught throwing mud at Malfoy. C'mon, Harry: By this point, you have to realize that you're terrible at being sneaky, so why do you still insist on trying? The absolute worst, though, is when Lupin has to bail him out of trouble. Reading about Lupin giving Harry the disappointed speech makes me cringe. I personally think the line about his parents was kind of a low blow, but Harry probably deserved it. Stealth is not your thing, kid. Try something new.

WTF Harry Scale: Two Marauder's Maps out of five, because he technically got away with it, but lost Lupin's respect in the process.

Harry Potter and the Goblet of Fire

Harry sticks his head where it doesn't belong, literally

He wanted to touch it, to find out what it felt like, but nearly four years' experience of the magical world told him that sticking his hand into a bowl full of some unknown substance was a very stupid thing to do.

As opposed to conventional wisdom, as Harry gets older he actually gets dumber, so these later books provide a variety of stupid moments to choose from. Although, I'm really tempted to pick that time that he refused to work out his egg clue until pretty much RIGHT BEFORE the second task, I'm going to go with sticking his head in Dumbledore's Pensieve. Harry, please do not go sticking your head into unidentified liquids just because you're bored and Dumbledore was stupid enough to leave you alone in his office. You had no reason to believe that you weren't going to be cursed or poisoned by the contents of that bowl. Curiosity killed the wizard.

WTF Harry Scale: Three golden eggs out of five, because that liquid could have literally been anything.

Harry Potter and the Order of the Phoenix

It seemed to take Sirius an age to fall. His body curved in a graceful arc as he sank backwards through the ragged veil hanging from the arch...

Harry spends the majority of this book making terrible decisions, so for one to stand head-and-shoulders above the rest is quite an accomplishment. But hands down the dumbest Harry moment of this book, and possibly the entire series, is when he rushes off to the Ministry of Magic to "rescue" Sirius Black. Of course, it's a trap, and the Order has to rush in and save Harry and the rest of the Scooby Gang, ultimately leading to Sirius' death and the heartbreak of millions of readers. I get that your hero complex is part of your charm, but really, Harry, you can't keep blindly springing into action like this. It rarely ends well.

WTF Harry Scale: Five dead Sirius Blacks out of five, because SIRIUS-ly Harry, this was your fault.

Harry Potter and the Half-Blood Prince

Blood spurted from Malfoy's face and chest as though he had been slashed with an invisible sword. He staggered backward and collapsed onto the waterlogged floor with a great splash, his wand falling from his limp right hand.

If you learned anything from Chamber of Secrets, it should have been to never trust anything that can think for itself if you can't see where it keeps its brain. But this is Harry Potter, and Harry Potter does not learn lessons. So even though he knows that sometimes books can't be trusted, because HE LITERALLY SAW TEENAGE VOLDEMORT ESCAPE FROM A BOOK AND CAUSE ALL TYPES OF SH*T TO GO DOWN, he still chooses to trust a suspicious inanimate object. It's one thing to try out some potion adjustments, but it's downright stupid to think that trying an unexplained spell is a good idea. Especially since the first unexplained spell he borrowed from the "Prince" caused someone to be held upside down by unseen forces. Harry's lucky he only gave Malfoy a couple of cuts and didn't blow up the school or something.

WTF Harry Scale: Four maimed Malfoys out of five, because you shouldn't hurt people, but also Malfoy is kind of a jerk.

Harry Potter and the Deathly Hallows

Harry decides to reconnect with nature

"We thought you knew what you were doing!" Ron shouted, standing up, and his words pierced Harry like scalding knives."We thought Dumbledore had told you what to do, we thought you had a real plan!"

REMEMBER WHEN HARRY WANDERED AROUND THE WOODS FOR MONTHS WITH NO CLEAR PLANS AND NO REAL WAY OF DESTROYING A HORCRUX? For the most part, Harry really stepped up his game during Hallows and saved the wizarding world and yadda yadda yadda. I get that he's a hero, but he spends what feels like half of the book camping and being moody. Even RON complains that he doesn't have a plan, and Ron is even worse at making good life decisions than Harry is. Thank God Snape eventually takes pity on him, otherwise he could still be wandering around the woods.

WTF Harry Scale: Three and a half cursed lockets out of five, because the end of the wizarding world is not the time to take an extended camping trip.

Harry, when you blow out your candles this year, I don't want you to make a wish. I just want you to be grateful for one thing: that you had Hermoine Granger around to clean up your messes.