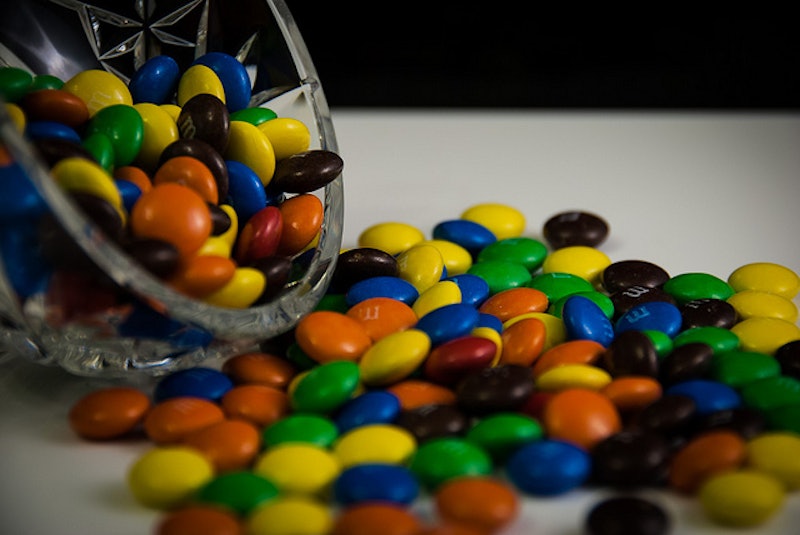 When I think of things that taste good, not many of them can described by the word "tan." To be honest, I mostly associate that color with things like baby food, or various kinds of leather. Thus, you can imagine my complete and utter shock when I discovered that for the first four years that I was alive, my second-favorite favorite candy, M&Ms, included the color TAN. My universe was shaken to the core. But what happened to tan M&Ms? Where did they go? Why were they ever invented in the first place? Does this mean that I consumed tan M&Ms? Did I like them? Is my name even Maddy? When I asked my mom if tan M&Ms were ever a thing, she vaguely replied, "Oh yeah..." so I ventured further into the recesses of the Internet, and discovered some pretty crazy things.

Just kidding. These are tan M&Ms we're talking about. A synonym for tan is "beige," guys. Beige is many things, but — wait. No, it's not even crazy. Because it's beige. Tan M&Ms do, howver, have a long and storied history, though, so let's take a closer look.

M&Ms were first created in 1941 during World War II, following a search for non-melting chocolate soldiers could carry in their kit bags. Mars, Inc. executive Frank A. Mars came up with the idea of candy-coated chocolate during the Spanish Civil War, and soon after, the original "Melt in your mouth, not your hand" treat was born, featuring brown, yellow, green, red, and purple colors.

I would like to mention, though, just for a moment, that M&Ms do, in fact, melt. I had a very special pair of butterfly print overalls that were ruined by melting M&Ms in third grade. Frank, I'd like an explanation.

Anyway, in 1954, Peanut M&Ms were introduced. Initially made only in the tan color, these tasty delights (my favorite variation) sparked the advertising decision to portray M&Ms as sentient beings. Unnerving, yes, but oddly cute — and, as we all know, quite an effective idea, as evinced by the fact that it's still in use today.

Soon, tan was added to the plain M&Ms family as well, and until 1975, every bag contained brown, yellow, green, red and tan candies. Now, yes, tan M&Ms did sometimes look a little vomit-y (or poo-ish, depending on who you talked to). And yes, once orange M&Ms were added in 1976, tan did seem a little redundant. But these guys were originals! They were around since the start! And they helped contribute to the lovely year-round autumnal color scheme that M&Ms was rocking! It was an aesthetic!

Tan M&Ms were also supposed to be E.T.'s choice snack, until Mars, Inc. executives decided that everyone's favorite alien was too ugly to have a positive marketing effect. Obviously nobody told them that beauty is what's on the inside, because Reese's Pieces sales went up by as much as 300 percent following the release of the film.

Tan M&Ms officially made their exit in 1995, when Mars, Inc. allegedly decided that it was unnecessary to have two shades of brown M&Ms. The company left the choosing of a new, replacement color up to the public. Consumers who were invested in their candy hues voted by calling 1-800-FUN-COLOR and choosing between pink, purple, or blue. Over 10 million votes were cast, enforcing the fun stereotype that Americans are extremely passionate about junk food and not much else.

Personally, I think the public made a grave error in choosing blue over pink and I will now be creating a petition to overturn this seriously devastating lack in judgement.

But anyway, yeah, you dummies chose blue, and the Empire State Building was lit up in blue in celebration of the new color, and then the M&M "personalities" were introduced, featuring the "cool" Blue M&M. Blue, blue, blue, blah blah blah. The whole world may have been painted blue, it seems, but tan M&Ms were kept alive — in the hearts of kind of old Americans everywhere.

Unfortunately, the #YesWeTan campaign hasn't quite taken off yet — but for the 10s and perhaps even hundreds of people who insist that tan M&Ms tasted better than these dumb ol' blue ones, there is still the hope that one day, there will be a new addition to the M&Ms bag, and it will be that vaguely unappealing middle ground between brown and orange.

More like this
10 Pumpkin Recipes That Are Way More Creative Than Pie & Lattes
By Rebecca Deczynski and Alexis Morillo
On TikTok, Tinned Fish Date Night Is The Latest Viral Food Obsession
By Emma Carey
The Historical Meaning Behind Why Autumn Is Called ‘Fall’
By Chelsey Grasso
42 Things That Make Everyone Look Even Better & Cost Less Than $30 On Amazon
By Maria Cassano
Get Even More From Bustle — Sign Up For The Newsletter