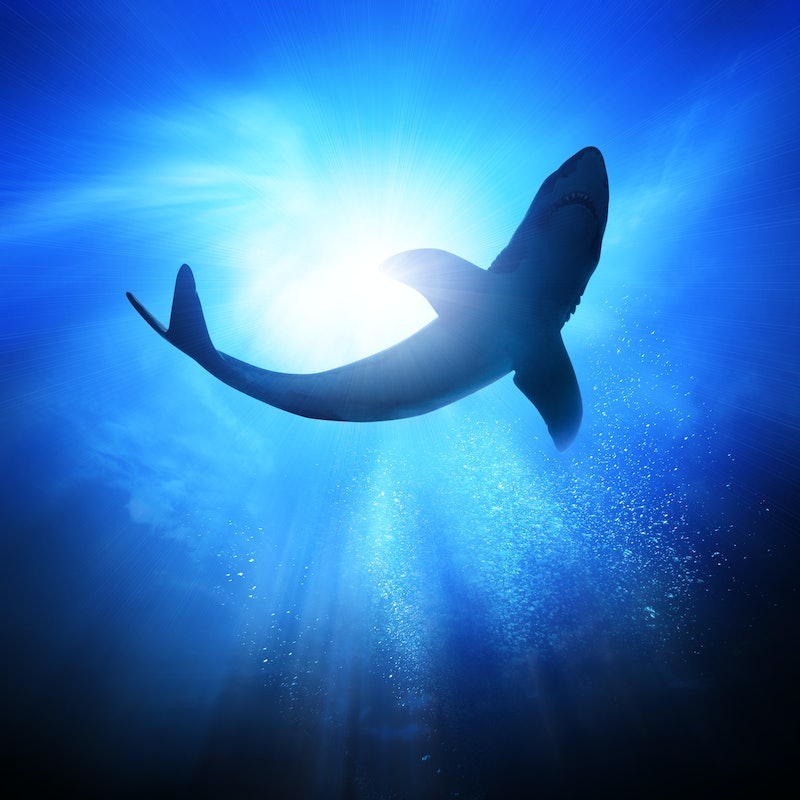 You're much more likely to be hurt in an ordinary way, like a car accident, than to be attacked by a shark — but still, it's gotta happen to someone. This weekend, the Internet let out a collective gasp of horror after professional surfer Mick Fanning survived a shark attack during the J-Bay Open surfing competition — and it was all caught on video. The World Surf League was hosting its competition at Jeffreys Bay off the Eastern Cape province of South Africa. Things appeared to be going normally, and Fanning, 34, was in the water between waves when all of the sudden a rather large-seeming shark popped its fin above the surface right under or beside Fanning's board and appeared to be approaching the surfer quickly.

This surprised even the announcer, who can be heard on tape dropping an expletive (and then excusing himself). The surf event organizers quickly sprung into action, activating air horns, and deploying several jet skis to get Fanning out of the water as quickly as possible. Video footage shows them reaching him very quickly and dragging Fanning out of the water, but Fanning had apparently kicked and punched the shark (!) and emerged from the water apparently unscathed. That's a story for the grandkids some day: "Grandpa, tell us about the time you fought the shark!"

Shark attacks are exceedingly rare, to be sure, but that's part of why they capture our imaginations so effectively. With more people carrying cameras than ever before during their aquatic adventures, these encounters are now being caught on tape instead of lost to the vagueness of memory. Here are five more examples of shark encounters proving that sharks really, really don't like to be messed with. Warning: some of these videos are graphic, and some contain strong language.

This giant great white shark seems disappointed when boaters near Long Beach, New York wisely refuse to get into the water. The great white and some other miscellaneous shark friends console themselves by munching on a dead whale nearby.

Though this encounter in France (accidentally caught on an ultra-portable GoPro camera) is somewhat less dramatic than Fanning's, I'm sure it was no less terrifying to the young surfer involved.

And these inebriated marlin fishers sure got the surprise of their lives when a shark came swimming by during their celebratory dip in the ocean. Maybe next year's male bonding expedition will be to somewhere a little more landlocked.

Maybe getting attacked by a shark is fun if you're safely enclosed in a diving cage? I'm not so sure, though.

This ambitious great white shark beached itself in Cape Cod while trying to catch seagulls. Some beachgoers decided to save it by dragging it back into the water with a boat, but you can see even in its vulnerable state, people are wary to get too close. If this shark goes on to breed many similarly stubborn and aggressive offspring, perhaps its line will eventually evolve into horrifying land sharks — fun!