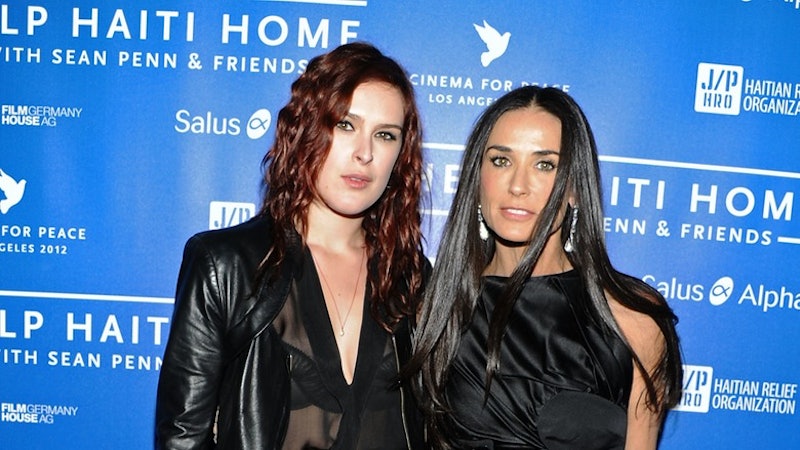 Something incredibly tragic has occurred at the home of Demi Moore. According to TMZ, the body of a deceased 21-year-old man was found in Moore's pool over the weekend. The site reports that a man was found at the bottom of the star's Beverly Hills pool "early Sunday morning," and the LAPD confirmed to US Weekly that at the time of the discovery, five people — but not Moore herself — were at home. TMZ explains a party had gone on at the actress's house, but that she was not the host. Moore is apparently out of town, and none of her family were present when the body was found.

According to US Weekly, the man, whose identity has not been released, is believed to have come onto Moore's property overnight, at some point slipping into the pool. A neighbor of the actress told TMZ that there are constant parties being held there by Moore's adult daughters, and that there may have been a large one occurring that night, thrown by her caretaker. Guests reportedly left the pool at some point in the evening, returning to find the deceased man early in the morning. No foul play is suspected, and his cause of death has been revealed, according to law enforcement officials that spoke to TMZ. Reports the site:

The man who died did not know how to swim and it appears he slipped and fell in the pool, law enforcement sources tell TMZ. We're told there was no foul play. Our sources say an assistant — either Demi's or one of her kids' — invited the victim to the party. It's unclear who threw the party, but our sources reiterate it was not Demi or her kids. As for alcohol, we're told there was 'a limited amount.'"

Given this new information, it appears that the young man's death was simply a horrible accident. My thoughts are with his family and Moore at this difficult time.