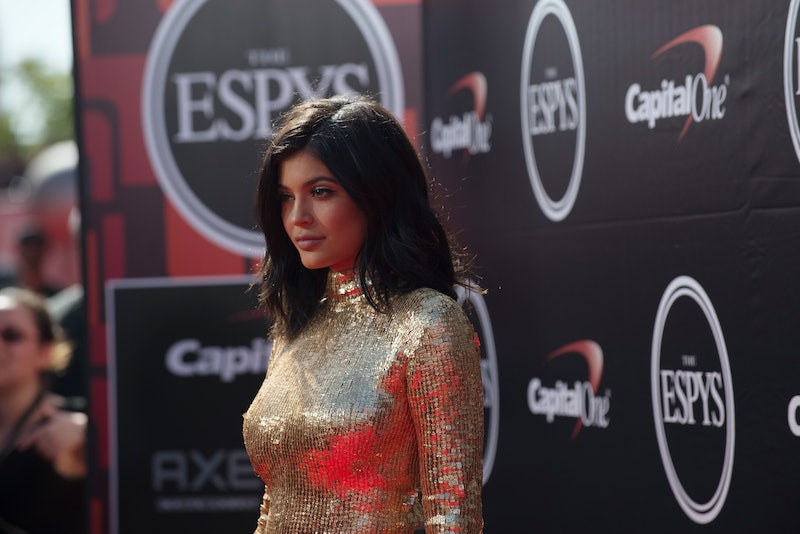 It's no doubt Kylie Jenner has a huge influence in the beauty world, especially for teens—remember the incredibly dangerous #kyliejennerlipchallenge? Yeah, thousands of teenagers did it, and now, thousands are following her footsteps again: M.A.C has sold out of their "Spice" colored lip liner thanks to Kylie Jenner. Apparently, they don't have enough supply for the crazy demand.

Though for a while, there was confusion over whether she was over drawing her lips or had fillers done, the truth came out on Keeping Up With The Kardashians eventually: she was getting fillers in her lips. Still, she used lip liner to her advantage, and the "Spice" color quickly garnered a cult following. A following so big that M.A.C shops and department stores are actually encountering a shortage of it. But, you can still buy the product online if you feel so inclined. You definitely won't be seeing it at your local shop, though.

That's probably why the whole Kardashian clan and their affiliates are constantly posing with products, from teeth whitening, to teas, to self-tanners. When you've got 29 million followers on Instagram, there's a pretty big pool of people that will listen to what you have to say. If you're featured on her, or Kendall, Kimmy, Khloé, our Kourteney's pages (or even Lord Disick), you can pretty much count on a boost in sales.

So for those of you trying to cop her infamous pout, looks like you'll have to find it elsewhere. It is pretty crazy though that every boutique is sold out of it all because of a 17-year-old. A very influential one, at that. The power of social media is unbelievable. Meanwhile, I'm over here trying to break 400 followers. M.A.C, you better start re-stocking, because people are searchin' high and low.